I bought a pound of small shrimp to use as garnish for a dish I was going to photograph. In the end, I didn’t use them. So I cooked the whole, unpeeled shrimp (1 minute in boiling salted water) and put them out for a family meal for whoever was willing to peel them. My grandson Lucas and I devoured those little crustaceans. They were so sweet, so fresh.


These were the variety of shrimp known as gamba arrocera, a small, wild-caught shrimp especially esteemed on the Atlantic coast of Huelva (Andalusia), although they are also caught in the Mediterranean. They are the shrimp I remember eating in local tapa bars years ago. Always simply boiled, they were served plain and unadorned. You peeled them yourself and, in those days, dropped the shells on the floor!

They are also the shrimp added to paella and other rice dishes—thus their nomenclature “arrocera.”  Cooked and peeled, they turn up in soups and in a favorite tapa bar salad, salpicón.  The small shrimp—peeled raw—were used as well in tapa bars for gambas al ajillo, or, as it was called in Málaga region, gambas al pil pil. Nowadays it’s common to use the larger langostinos. (More about varieties of shrimp/prawns here.)

Size varies. Mine were 54 shrimp (unpeeled with heads on) to the pound. The variety is also known as gamba blanca (Parapenaeus longirostris) or “white” shrimp, although it’s really a pale pink-beige color. It turns a darker rosy hue after cooking. 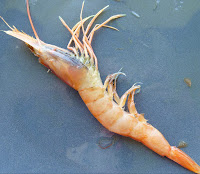 These fresh shrimp are best cooked immediately, then stored refrigerated. If kept raw more than a couple days, they begin to show a deepening violet/black color inside the shell of the heads. They are not spoiled!

It’s not necessary to devein the shrimp before eating them. The “vein” is perfectly edible. In larger varieties of shrimp, it can be very unsightly, so is generally removed. But, with these small ones, it’s not an issue.

I enjoyed those shrimp so much that I've bought them again. Some to serve plain--no dipping sauce, no lemon. Just shrimp. The rest I've peeled--pretty easy after they're cooked--to use in a refreshing cocktail called ceviche and with avocado and a piquant sauce.

Rinse and drain the shrimp. Bring water to a boil with the salt in a deep pot. Add bay leaf and lemon slice, if using. Have a large bowl of ice and water ready.

Add all of the shrimp to the boiling water. Return the water to a boil and remove the pot from the heat. Use a slotted spoon to remove shrimp and drop them into the bowl of ice water. Allow the shrimp to cool completely. Drain.

Either serve the shrimp immediately or store them, covered and refrigerated for up to 24 hours.

Unlike some ceviche recipes, this one calls for cooked, not raw, shrimp. The shrimp need only 10 minutes in the lemon marinade.

Serves 4 as a starter.

Place the shrimp in a small glass bowl. Pour over the lemon juice. Let the shrimp marinate, refrigerated, for 10 minutes.

Place the thinly sliced onion in a small bowl. Add ½ teaspoon salt and cover with water. Allow the onion to soak for 10 minutes.

In a bowl combine the diced yellow pepper, green chile, avocado and olive oil. Season with salt. Drain the soaked onions and add them to the bowl. Add the shrimp and lemon juice. Add the cilantro. Mix gently. Divide the ceviche between 4 cocktail cups.

Cut avocados in half and remove pits. Sprinkle them with lemon juice. Fill the cavities with shrimp. Place a dollop of pink cocktail sauce on top of the shrimp.

Place the tomato, onion and chile in a mini processor and grind them finely. Add the pimentón, mayonnaise, olive oil, lemon juice and about ½ teaspoon salt. Process to make a smooth sauce.
Sauce keeps, covered and refrigerated, up to 2 days.

At the Feria de la Gamba (Shrimp Fair) in Cartaya (Huelva, Andalusia), 8-11 of August, two tons of shellfish will be served up. Other shrimp fairs in Punta Umbría and Isla Cristina take place at other times of the year.
****