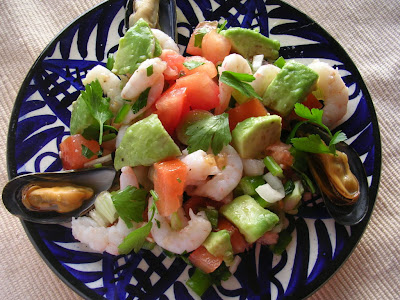 A dream come true—avocados in my garden! That’s after five years of wondering why my little avocado tree never made fruit. The tree appeared to thrive, but year after year it flowered and produced lots of avocado nubbins that all fell off. I worried that perhaps it needed a mate—cross pollination? I think it just needed more and deeper watering. 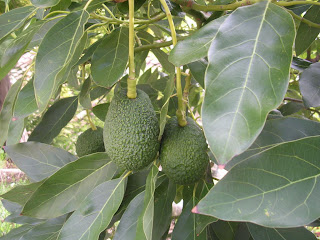 As I watched my fruit mature, I was gifted with a whole bag full of avocados from a friend’s orchard! I have been in seventh heaven.

I adore avocados sprinkled with a little salt and lemon juice and scooped right from the shell. I slice them lavishly into salads. I make plenty guacamole (I planted coriander seeds to have a source of cilantro). But with such abundance, now it’s time to dream up other ways with avocados.

Mine are the Haas variety. The marvel of this variety is that the fruit won’t soften and fall off the trees, meaning I can pick it over the next couple of months. After picking, they need anywhere from a couple days to up to a week to soften. I can never seem to predict when they’ll be ready to eat!

ABOUT AVOCADOS
Spain is far and away Europe’s largest producer of avocados. Although the commercialization of Spanish-grown avocados is new, their cultivation is not. Spain has been growing avocados since they were “discovered” in Mexico by Spanish conquistadores around 1520. The Spanish name, aguacate, comes from the word the Aztecs of Mexico called the fruit, from the Nahuatl name, ahuacatl, meaning “testicle tree,” for the way some varieties of the tree bear their heavy fruit in pairs. Admired for the beauty of its evergreen foliage and deep-green pear-shaped fruit, the avocado was early grown decoratively in Spanish monasteries and palace gardens. But, unlike tomatoes and potatoes, other foods from the New World, avocados never really caught on in Spain.

The first avocado plantations were established in the subtropical areas around Almuñecar on Granada’s coast in the early 1960s. Since then cultivation has extended to protected valleys with mild microclimates in Málaga province. I look down on a large avocado plantation in the valley below my house.

The avocado, although a fruit, is not especially sweet. It contains a little protein and carbohydrate as well as oil, a mono-unsaturated fat, which, like olive oil, is the healthiest kind. It is rich in potassium, vitamins A, B complex, C and E. Half a small avocado contains about 125 calories. A spoonful contains fewer calories than an equivalent amount of butter or mayonnaise, making it a fine substitute for those spreads. Ripe avocado whipped with a little sugar and a bit of lemon juice makes a superb alternative to whipped cream, served with fruit or as a topping for a tart.

Select avocados that are firm and under-ripe, with stems attached, and mature them at room temperature wrapped loosely in paper. (If stems have broken off, seal the ends with a piece of tape to prevent the flesh from darkening.) To test for ripeness, squeeze very gently in the palm of the hand--the flesh should give slightly. Once ripened, store avocados in a cool place. Although the refrigerator crisper-drawer is not ideal (too humid), it is usually the only alternative.

Cut and prepare avocados shortly before serving, as exposure to light and air causes the flesh to darken. Cut them from stem to stern, lengthwise, then twist gently to separate the halves from the center pit. Whack a sharp knife directly into the seed and twist it to lift out. To peel, place the avocado cut-side down and strip or pare off the skin. Or, use a large-size spoon to scoop the flesh from the skin in one piece. Sprinkle cut fruit with lemon juice to prevent discoloring. Leaving the pit embedded in the avocado doesn’t help to avoid darkening, except where it prevents exposure to the air and light.

I loath avocado-shrimp cocktail with pink mayonnaise (in Spanish, salsa rosa) that is served in so many Spanish restaurants. Gloppy sauce overwhelms the sweetness of shrimp, the butteryness of avocado. I order it sin salsa, with a wedge of lemon on the side. Avocado combines admirably with fish and shellfish, and is even better with the tart zing of citrus dressings; big spices; salty foods such as bacon, ham, capers, olives; and, surprisingly, with sweet fruits, where the buttery smoothness of the avocado makes a lovely contrast.


SALAD WITH AVOCADO, GRAPEFRUIT AND FENNEL 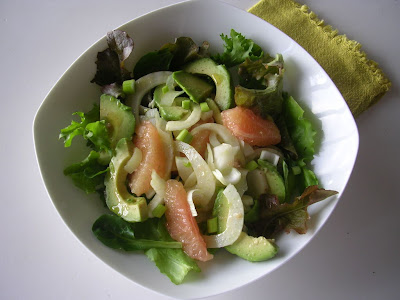 Here is a recipe for salpicón, a favorite salad in tapa bars in Spain. This version is embellished with chunks of avocado. (The photo appears at the top of the page.)

Combine the shrimp in a bowl with the tomatoes, pepper, onion, garlic, parsley, salt, oil and lemon juice. Stir to combine. Add the avocado immediately before serving.
Posted by JANET MENDEL at 7:49 PM