PAELLA, MADE IN THE USA

When I go traveling, I pack a kit with saffron, pimenton and Spanish rice so that I can prepare paella for my hosts where I am staying.We go out shopping for good olive oil from Spain, chicken and seafood and return to the kitchen to work together. On this trip to the US, I've made paella in New York with my friend Donna Gelb and two more with my son Daniel and his wife Eli's family in the Atlanta area. I've got one more paella stop on this trip, in New Orleans with my sister. (See the end of this blog for pictures of the New Orleans edition of paella.)


Paella made-in-the-USA usually requires some substitutions. First of all, there's the problem of the paella pan. The authentic pan is wide and flat, originally intended to set over a wood fire, and doesn't fit very well on a stove top. So I rummage in kitchens until I find a deep skillet or flat-bottomed wok that will hold the rice, chicken and seafood.

The shopping list. Good extra virgin olive oil is essential for paella. It gives authentic flavor. And medium-short-grain rice. If I can't find real Spanish rice, I substitute Italian arborio rice. Shrimp, clams or mussels and squid, if I can get it, because it adds so much flavor. I like to get boneless chicken thighs and cut them into three or four pieces, so that they cook quickly with the sofrito.Green beans, cut in short lengths and par-boiled, and one artichoke, cut in sixths and added to the sofrito.


Paella is a process of developing flavor, as each ingredient is added to the pan. Don't fret about the chicken or the shrimp overcooking--it's purpose is to produce flavorful rice. I like to use some unpeeled shrimp to garnish the finished paella. I saute them in the oil before beginning the sofrito, as that adds flavor to the oil.

In my own kitchen in Spain, I make a stock of shrimp heads and peels, chicken bones, plus liquid from steaming open clams or mussels. But working in someone else's kitchen, I find it easier to purchase ready-made low-sodium chicken broth. Either add the broth to the pan and bring it to a boil before adding the rice or else heat the broth in another pan and add to the rice in the paella.


About the saffron: because it's so expensive to buy in the US, I bring it from Spain. I try to find only the best saffron with denominacion de origen La Mancha. Crush the saffron threads in a small mortar (or tea cup if you don't have a mortar) and add about 1/4 cup very warm water. Let the saffron infuse 10 minutes or longer. If you don't have saffron, use a drop or two of yellow food coloring plus pimenton (Spanish paprika, but not the smoked kind).

One important tip: once the rice, chicken, seafood and broth have been combined, bring everything to a boil, then DON'T STIR THE PAELLA AGAIN. Unlike risotto, for paella, you want to avoid developing the starch, or the rice will be gummy. Cook on a high heat for about 5 minutes, then turn the heat down to a simmer and cook until the rice is al dente.

Remove from the heat, tent with foil and allow to rest at least 10 minutes. The rice will finish cooking.

PAELLA A LA AMERICANA
To serve 6.

Heat the oil in a large pan. Add the whole, unpeeled shrimp and saute them until pink on both sides. Remove the shrimp and reserve.

Add the pieces of chicken to the oil and saute on a medium-high heat until they are browned on both sides. Add the squid and fry. Add the peppers and garlic and continue sauteing. Add the artichokes. (If you cut them immediately before adding to the pan, they do not need to be rubbed with lemon.) Next add the tomatoes and the liquid.

Bring the liquid to a boil and add the rice. Stir it in to combine all the ingredients. Stir in the saffron, pepper and salt to taste (depending on the saltiness of the stock). Let everything cook on a medium- heat for 5 minutes, then turn the heat down to low and continue to cook until rice is just tender, about 15 minutes more.

Scatter the green beans over the top of the paella. Place the sauteed shrimp and cooked clams or mussels on top and garnish with strips of red pepper. Remove from heat, cover with foil and let the paella rest 10 minutes. Serve garnished with lemon wedges.

A TASTE OF SPAIN IN NEW YORK 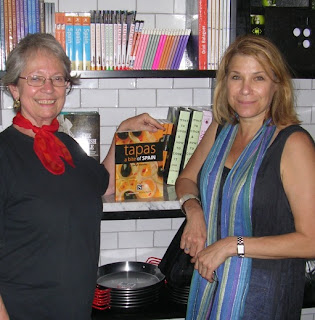 Look at this! You can buy my book, TAPAS--A BITE OF SPAIN -at DESPANA in New York. You also can find lots of ingredients for preparing tapas and the wines to accompany them at Despana. I visited the shop with my friend Donna Gelb, a New York-based food writer, in search of a taste of Spain in New York.


We sampled some fine jamon iberico de bellota-- that's the very best iberico ham--and shared several tapas that are made fresh in the shop. Tender bites of octopus with a Galician-style dressing of pimenton (paprika) and extra virgin olive oil; three kinds of croquettes--ham, cod and Idiazabal cheese; thick slabs of potato tortilla, one with just onion, the other with chunks of chorizo sausage, and tostas with melted cheese. What a great lunch for a day in the city.

Despana, located in Soho, has wine tastings and pairings every other Thursday, serving a selection of wines from Spain along with tapas.

The shop offers a good selection of cheeses from Spain; canned gourmet foods; olive oil; serrano and iberico hams; spices such as saffron and pimenton; beans and garbanzos; piquillo peppers; earthenware cazuelas and metal paella pans. Most products are imported from Spain, but Despana manufacturers its own house-brand of chorizo.

Here I am in the U.S., typing on a key board that doesn't have accent marks and a tilda ~ to go over the "n" in Espana. Now I understand why Despana spells its name that way!  Nevertheless, I am enjoying my visit and my tastes of Spain in America. Next stop, Atlanta.
Posted by JANET MENDEL at 9:38 PM 6 comments:

At breakfast time, I take my basket and clamber down the embankment to the strawberry patch, picking just enough of the juicy red berries to eat right away. With a big dollop of yoghurt, the fruit is such a delight.

I’ve only got about a dozen plants, so don’t get much more than one serving every other day. Next year I’m going to dig in a lot of manure and see if they produce more.

My home-grown strawberries, of varying sizes, may not be as gorgeous as the huge ones in the market, but, straight from the garden, they are sweet and juicy.

I like my strawberries plain and simple. But if there are guests, I might make an instant strawberry short cake, using magdalenas purchased at the village bakery and Greek yoghurt instead of whipped cream.

Magdalenas are small, lemon-scented sponge cakes, somewhere between a cupcake and a muffin. They are related to French madeleines, but the Spanish version, said  to have originated with the Magdalen nuns, is made with oil, not butter. Serve magdalenas with breakfast (delicious dunked in coffee) and with afternoon tea. Or, split them and use as a base for sliced fruit. 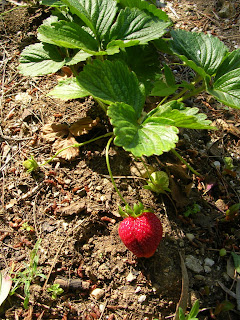 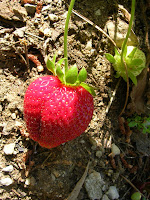 Before cracking the eggs, place them in hot tap water to warm slightly (helps to increase volume). Sift together the flour and baking powder. With an electric mixer, beat the eggs and sugar for 10 minutes until the eggs increase in volume. Stir in the lemon zest, then fold in the flour. Stir in the oil.

Fill the paper cups two-thirds full of batter. Bake until the cakes are golden, about 15 minutes.
Posted by JANET MENDEL at 1:46 PM 1 comment: