THESE SHRIMP ARE SIZZLING!

First you catch a tantalizing whiff of garlic. Then, as the cazuelita is set before you, you feel the heat radiating from the little dish. The lid is lifted and the oil spits and splutters. Small pink shrimp, golden slices of garlic and deep red flecks of chili dance in the oil. Now a taste—don’t burn your tongue!

Gambas al ajillo—shrimp sizzled with garlic— this is the essence of the tapa bar sensory experience.

In bars in Andalusia, this tapa is known as gambas al pil pil, for the onomatopoeia of spitting oil. But Madrileños look askance at such nomenclature, seeing as how “pil pil” in Basque cuisine is something quite different (an emulsified sauce for salt cod, with olive oil and garlic). 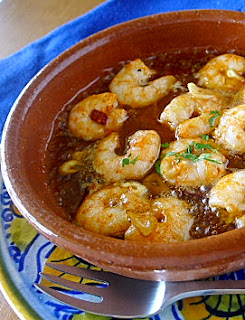 In tapa bars, the dish is prepared to order in small, individual cazuelitas, earthenware ramekins. You can do this in a home kitchen by placing the individual ramekins directly over gas burners. If using earthenware, remember that it retains heat, so remove the shrimp from the stove before they are fully cooked.

If you have an electric stove, you will need to use a heat diffuser under clay cazuelas or else use a metal pan instead of clay. If you don’t want to bother with individual servings, cook all the shrimp in a skillet, then plate them. While  they won’t have quite the same sizzle, they will still taste divine!

This dish packs a lot of flavor for just four ingredients—shrimp, olive oil, garlic and a few flecks of hot chili. The juices from the shrimp flavor the oil, creating a sauce for dipping chunks of bread.  It’s best made with whole fresh shrimp, peeled shortly before cooking. However, not everyone can get them fresh, so frozen is an alternative.


Incidentally, you and I say “shrimp,” no matter what the size of the crustacean (unless you’re a Brit, in which case you call it “prawn”), but Spaniards have names for every variety. So, in fact, the ones pictured here are not “gambas,” but “langostinos.” That's because the gambas at the market today were very small indeed.

Why are gambas al ajillo usually depicted as jumbo shrimp with their tails intact? Maybe food stylists think they’re prettier with unpeeled tails aloft. In fact, this dish is usually made with small to medium shrimp and always with the whole shrimp peeled, tails as well. No way are you going to use your fingers to pick them out of the boiling oil. They’re meant to be speared with a fork or toothpick and eaten in one bite, with bread for sopping up the juices.

Variations on a theme: Add a splash of manzanilla Sherry to the shrimp. Or, add chopped serrano ham or chopped chorizo along with the sliced garlic.

If making individual servings, place 2 tablespoons of oil in each of 4 cazuelitas or small pans. Divide the garlic, chili and shrimp between them.

Otherwise, place the oil in a skillet with the sliced garlic and chili. Heat until the garlic begins to turn golden. Add the shrimp in a single layer. Cook them, stirring, until they turn pink, 30 to 40 seconds. Add the Sherry, if using, and cook 1 minute.

Remove the pan from the heat. Sprinkle with parsley and salt. Spoon the shrimp, garlic and juices into 4 individual ramekins or plates. Serve with bread. 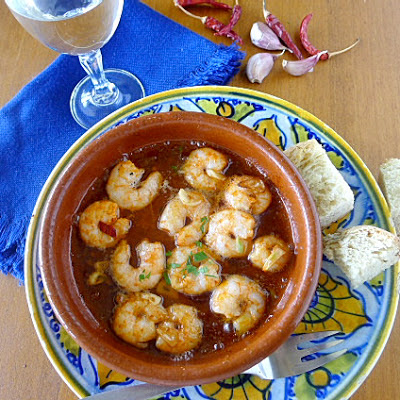