It’s World Sherry Day tomorrow! What better excuse to enjoy this unique wine? At my house, not only am I sipping Sherry, but I’m cooking with it too (recipe for Chicken With Sherry is below).

We're talking about Sherry with a capital “S”. That's "S" as in Jerez, a town in southern Spain where this extraordinary wine is made. In Spanish, Jerez is pronounced "hare-ez." But, if you were an Englishman or Frenchman and attempted to pronounce the town’s name, it might come out as “sherez.” Forget anything you ever heard about lower-case "sherry" from Britain, Australia or California. It's not Sherry—any more than does Port come from any place but Oporto; Burgundy or Champagne from anywhere but those regions of France.

Like Champagne, Sherry is a not just a style of wine, it's a place. The wines from that place carry denominacion de origen, a protected label guaranteeing their quality and origin

Jerez de la Frontera, in the province of Cádiz, is Sherry's home base, where most of the long-established bodegas, or wineries, are located. Two other towns in the region—El Puerto de Santa María and Sanlucar de Barrameda—are also authorized Sherry producers. The grapes must be produced within a 35-kilometre radius. Real Sherry is made from the Palomino grape varietal.

Sherry is made by a very special process, called criadera, meaning “nursery.” New wine is added to casks at the top and gradually blended with older wines in lower barrels, before being drawn off from the bottom rack, the solera. This blending and aging process gives the wines depth and richness of flavor and aroma. 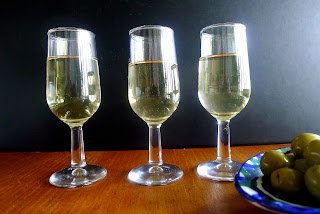 Sherry is a fortified wine, with a higher degree of alcohol (16 to 19 percent) than most table wines. And, Sherry is the reason that tapas exist. Tapas and Sherry create a perfect symbiosis, as bites of food make it possible to keep sipping the wine. You eat in order to better drink.

Sherry with a capital “S” is further designated with lower-case names which describe the type of wine. Here they are, along with some suggestions for serving them and for using them in cooking.

Fino. After fermentation, new wine which shows the beginnings of flor, a veil of yeast, is classified as fino. During the aging process, the flor prevents oxidation, making a wine which is pale straw in color, totally dry, light and fresh, with an almondy finish. It is the world's finest aperitif wine. Serve fino, lightly chilled, with shellfish, ham, olives, toasted almonds or almost any of the many Spanish tapas.

In cooking, fino Sherry combines with fish, shellfish, soups, chicken, meat, poultry, cheese and a large etcetera. Classic dishes such as riñones al jerez, kidneys in Sherry, are made with a dry fino. Which is not to say you can't create a new taste by substituting a different Sherry. Usually the Sherry is added during cooking, so the flavor blends with the sauce and the alcohol is cooked off. Sometimes the wine is added at the very end of cooking, so the volatile alcohol helps waft the wine's aroma to the nose and taste buds. In the case of a soup or sauce, add some wine during cooking and a dash more at the end of cooking.

Manzanilla. This is also a fino, but specifically from the Atlantic town of Sanlucar de Barrameda. Salt-air breezes and ocean humidity make this wine a little paler, a little drier, a little more delicate than other finos. Manzanilla, with its salty, olive tang, goes especially well with fish and shellfish.

In cooking, add a splash of manzanilla at the very end of cooking, so the alcohol is not dissipated. Blend it with mayonnaise and seafood dressings.

Amontillado. These are dry fino Sherries that are allowed a degree of oxidation during the aging process, giving them a rich, mellow, hazelnut flavor. Between topaz and amber in color, amontillado wines are still aperitif drinks. Their depth of flavor makes them superb additions to many dishes, especially meat and poultry. Add to cream of mushroom, asparagus, chicken and other soups. Combine with cheese for dips and spreads.

Incidentally, amontillado means "in the Montilla style". Briefly, so as not to confuse the issue too much, wines of Montilla-Moriles are made in the province of Córdoba by the same process as Sherry, the criadera-solera system. Different grape varietals and different soil and climate produce wines which are at the same time similar to and completely different from Sherry. Or, anyway, much more like Sherry than one of those "lower case" wines from another country.

Oloroso. Wines not marked with flor become oloroso. But within this designation are several styles, ranging from dry to almost sweet. Their color is deep old-gold, the mellow flavor is reminiscent of walnuts. Serve oloroso as an aperitif with Spanish sausage, with aged cheeses. It is a sumptuous accompaniment to after-dinner savories and the fruit and cheese board. This wine is especially rich in cooking. Add it to chicken dishes, poultry stuffing, organ meats, consommé. Within this category, rayas, palos cortados and olorosos secos present a range of styles. Use oloroso seco to lace a classic consommé.

Cream. Mahogany in color, velvet in texture, these wines are made of a combination of mellow olorosos and sweet wines from the Pedro Ximénez grape varietal. An exquisite dessert wine. Use it to macerate fruit or add to dessert sauces. It gives a complex sweetness which complements some savory dishes when balanced with tart flavors such as orange, lemon, rhubarb. Try it for a new twist on duck á la orange.

For some suggestions for cocktails made with Sherry, see this blog post.


Any type of mushroom works in this recipe. I used oyster mushrooms, torn into strips, for the version pictured here. Pour fino Sherry to accompany the meal.

Add the onion, garlic, carrot and mushrooms. Sauté on a medium-high heat until the onions and mushrooms are slightly browned. Stir in the flour.