WHEN LIFE GIVES YOU ONIONS—


I found a heap of onions on my kitchen cabinet the morning after my family had been to a friend’s finca (small farm), where they were harvesting onions. They brought a bunch back for me. Wow! What onions! The biggest one weighs 2 ½ pounds! What do you do with a 2 ½-pound onion?

I thought of an onion tart, such as the French pissaladière or Catalan coca. But, hey, it’s high summer. I don’t really want to turn on the oven. That’s when I came up with onion tortilla—same round, flat “omelet,” but instead of the classic filling of potatoes, I would use sliced onions. 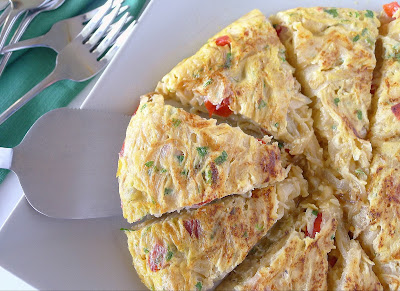 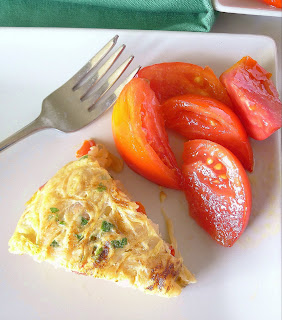 The onions are not fried, but “poached” in a quantity of oil. Moderate the heat so that they gradually release their moisture and become tender. When they begin to brown and caramelize, they’re done. This will take 15 to 20 minutes, depending on how much moisture the onions contain. Drain them in a colander set over a bowl. Save the oil that drains off. You’ll need a spoonful of it to finish the tortilla. The rest can be saved for another use.

A trick to tortilla making: use a large, heavy skillet to cook the large volume of sliced onions (or potatoes) and a smaller, non-stick skillet to finish the tortilla. The smaller the pan, the thicker the tortilla. (I used a 10-inch skillet for a 1-inch thick tortilla.) You will need to adjust the cooking time accordingly. Tortilla usually is preferred “juicy” in the center, golden—not browned—on the outside. However, if you plan to serve it cut into squares and speared on picks as a tapa, cook it thoroughly so no juices run when it is sliced.

Serve the tortilla hot or cold, for brunch, lunch or supper; as a side with ham and cheese. A salad of greens or sliced tomatoes is the perfect accompaniment.

Peel the onions, cut them in half and slice them lengthwise (stem to root) in thin julienne.  (You should have about 8 cups slivered onion.)

Heat the oil in a deep skillet. Add the onions and sauté them on medium-high heat, stirring frequently. After 10 minutes, add the diced red pepper, red pepper flakes, if using, ½ teaspoon salt and freshly ground black pepper. Continue cooking the onions until they are very tender and beginning to caramelize, 15-20 minutes total. Place them in a colander over a bowl to drain for 15 minutes.

Beat the eggs in a large bowl with ½ teaspoon salt. Add the chopped parsley. Stir the drained onions into the eggs.

Heat 1 tablespoon of the reserved oil in a non-stick skillet. Pour in the egg and onion mixture. Use a wooden spatula to turn the mixture two or three times, tilting the pan so uncooked egg runs under the mixture. Then allow it to set without stirring. Use the spatula to firm all around the edges. Let it cook until the top begins to appear cooked, about 5 minutes. The tortilla should brown very lightly on the bottom.

Place a plate on top of the skillet. Hold it firmly in place and reverse the skillet so that the tortilla rests on the plate. If needed, add a little more oil to the pan. Slide the tortilla back into the pan to cook the reverse side, 3 minutes more. To remove it, lift one edge with a spatula and slide the tortilla out onto a serving plate. 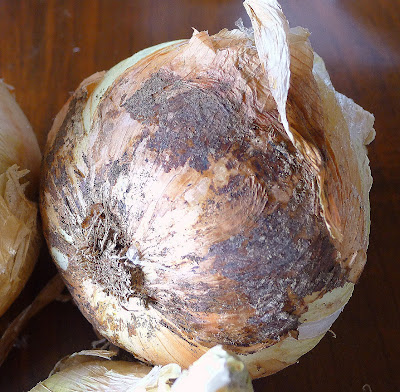