A WEEK TO CELEBRATE SHERRY

In case you were looking for a theme for a party, here’s a good one—International Sherry Week, November 4-10. This fabulous wine that is made exclusively in Andalusia, Spain, comes in so many styles that you could try a different one every day of the week. Check out the web site Sherry Week to find tasting events near you or download the easy guide to food-matching with Sherry that will give you ideas of how best to serve this versatile wine.

Yes, serve Sherry with tapas. It’s the original tapas wine. But, you can also serve Sherry right through a meal, starting with a fino with aperitifs, amontillado with the bisque, oloroso seco with stuffed turkey and cream Sherry with the pumpkin pie.

By the way, you can use any type of wine glass to serve Sherry. I used to be a purist and even carried my own Sherry glasses when I travelled to the U.S. on book tours, where the type of glass was unknown. Called a catavino, it is a slim glass with a narrow top, the better for inhaling the wine’s aroma. But styles have moved on. If I’m serving Sherry with a meal, I like a medium-sized white wine copa.

Besides being the wine that goes with everything, Sherry is superb in cooking, from soup to sweet. Don’t look for “cooking sherry.” There’s no such thing. Real Sherry is real Sherry, with denominación de origen Jerez-Xeres-Sherry. Most Sherry is very reasonably priced, meaning it’s affordable enough to use in the sauce as well as to drink.

I delved into my cookbook collection, looking for some new ideas for cooking with Sherry. I rediscovered El Vino de Jerez en la Cocina Universal (Sherry Wine in International Cuisine) by Lalo Grosso de MacPherson (Espasa-Calpe; Madrid, 1982). Lalo Grosso, who grew up in Cádiz, daughter of a shipping magnate, learned to cook from the family cook and on travels with her father. After marriage (she had six children) Lalo set up a pioneer catering business in 1971, producing exquisite spreads for weddings, baptisms and banquets. With the sponsorship of the Academia Española de Gastronomía and the Cofradía de la Buena Mesa, Lalo wrote her first cookbook about Sherry. She became an indefatigable promotor of Sherry and of Spanish gastronomy abroad. (María del Rosario Grosso (Lalo) was born November 7, 1932, so Happy Birthday, Lalo.)

I chose a recipe from the book for Rape al Jerez, Monkfish with Sherry. Chunks of fish cook in a simple sauce made complex with the addition of Sherry and brandy. 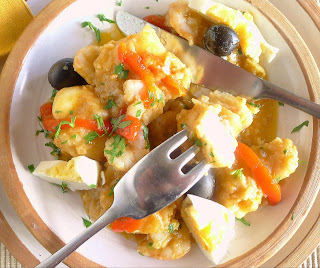 The mellow, winey flavor of this sauce is enhanced with the addition of brandy as well as Sherry. If available, use Brandy de Jerez.

Monkfish (also known as angler fish) is a fine choice, as it’s very meaty and doesn’t disintegrate in cooking in the sauce. The fillets are cut into chunks, whose shape made me think that scallops would be a delicious substitute in this recipe.

You will need a thick tomato puree—not concentrate—for this recipe. Use canned sauce or try the recipe that follows, spiked with additional Sherry.

Cut the fish into 1 ½-inch chunks. Sprinkle it with salt and pepper and allow to come to room temperature.


Heat enough oil to cover the bottom of a skillet. Dredge the pieces of fish in flour, pat off excess and fry them in the oil, turning to lightly brown all sides. The fish does not have to cook through as it will finish cooking in the sauce. Remove the fish and reserve it.

Strain the oil into another pan or cazuela, adding enough additional oil to make 3 tablespoons. Sauté the onions and garlic on moderate heat 5 minutes. Stir in the tomato sauce and cook 2 minutes. Add the brandy and cook 3 minutes. Add the Sherry and water or fish stock. Season with ½ teaspoon salt, freshly ground black pepper and nutmeg. Bring to a boil, reduce heat and add the fried pieces of fish. Cook the fish in the sauce, turning it once, 10 minutes.

Add the shrimp and strips of pimiento to the sauce. Cook until shrimp begin to curl and turn pink, 3 minutes.

Serve the fish and sauce in individual cazuelitas garnished with sliced egg, olives and chopped parsley. 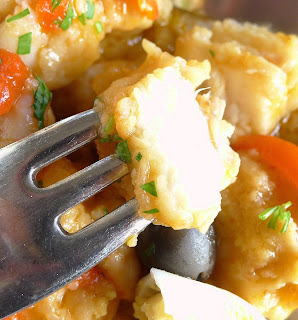 You will not need all of the sauce for the Monkfish with Sherry recipe. Store the sauce, covered tightly, in the fridge. Use it on pasta or pizza, on fish, chicken or meat, with vegetables. Vary the sauce by adding additional herbs to taste.

Heat the oil in a heavy pot. Sauté the onions and garlic until softened, 5 minutes. Stir in the pimentón and immediately add the chopped tomatoes. Add the Sherry. Bring the sauce to a boil, then reduce heat to moderate. Season with salt, pepper and bay.

Cook the sauce, uncovered, until it is very thick, about 45 minutes. Let it cool slightly, then transfer to a blender and blend until smooth. If desired, the sauce can be sieved as well. 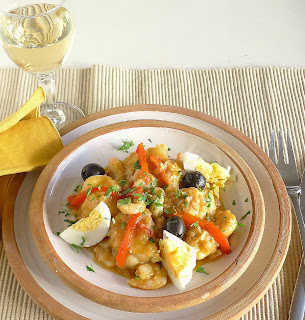 If you want to know more about the types of Sherry and how they are made, see this previous blog post, Celebrate Sherry.