I won’t be roasting a turkey for Thanksgiving this year. For the upcoming holiday I´m making a main dish for guests who include one vegetarian and another who is gluten- and dairy-intolerant.


I’ve got nothing against turkey! In fact, I eat lots of it, year-round. But, I like my turkey in parts—boneless breast, marinated in adobo, roasted and thinly sliced for “lunchmeat” and salads; drumsticks simmered until the meat is falling off the bones, to shred for enchiladas; thighs cut into cutlets, for breading like veal piccata.

This week I’m using turkey thigh meat cut in chunks to make an Andalusian stew. The traditional recipe, with typical spicing of saffron, pepper, cinnamon, cloves and cumin, is made with veal or beef. All I’ve done is substitute turkey—and cut the cooking time in half. 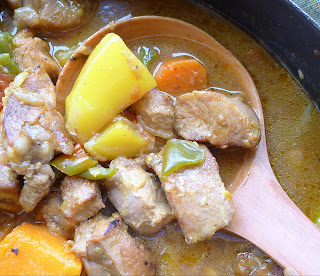 Often this stew is made by simply combining all the ingredients—including the olive oil—in a stew pot and simmering them until done. Another version calls for the onions and meat to sofreir—fry—before adding the other ingredients and cooking liquid.

The potatoes can be stewed with the meat or cut as for fries, fried separately and added to the stew at the end of cooking. Seasonal vegetables can be incorporated in the basic stew. I’ve used squash. Artichokes, green beans, peas, fava beans are also typical.

In Andalusian home cooking, of which this stew is typical, the wine used in cooking would be the local village wine, usually a vino generoso, a medium-dry, slightly oxidized white wine. Sherry is the best substitute, but a not-too-acidic white wine can be used instead.

If you like, thicken the sauce/gravy of the stew with a little flour mixed in water or stale bread mashed to a paste. In any case, serve the stew with bread for dunking in the savory gravy.

Cut the turkey into chunks of about 2 inches. Sprinkle with salt and pepper.

Heat the oil in a cazuela or heavy stew pot. Add the sliced onions and let them brown slowly, 8 minutes. Add the pieces of turkey and sauté a few minutes. Add the strips of pepper, tomatoes and carrots. Add the Sherry and cook on high heat until the alcohol cooks off. Stir in the turkey stock.

To char-roast a head of garlic: Spear the whole head of garlic on a fork and hold it over a gas flame (protect hands) or place it under broiler. Roast, turning, until the outer skin of the garlic is blackened and charred. Peel the individual cloves. They will be only slightly softened. Either add them whole to the stew or crush the garlics to a paste in a mortar.

In a mortar crush the saffron with the peppercorns, cloves and cumin. If desired, crush the charred and peeled cloves of garlic too. Stir in the water. Add the spices to the stew. Add peeled garlic cloves if they were not crushed with the spices plus the bay leaf, cinnamon and cut-up potatoes. Cook, covered, 20 minutes.

Add the pieces of squash to the pot. Cook until turkey, potatoes and squash are tender, 20 minutes more.