In the first cookbook I ever wrote (COOKING IN SPAIN; 1987), there were three recipes for cooking tongue. (As well as five for liver, two for kidneys, two for tripe and one each for brains, sweetbreads and testicles.) When I revised the book for a new edition (2006), I thought, “does the world really need three different recipes for tongue?” I cut two of them.

The one that appears in the newer edition is Estofado de Lengua a la Andaluza—Braised Tongue, Andalusian Style. Anything cooked in “Andalusian style” usually means a rich sauce made in the mortar (or blender) of almonds, garlic, saffron (or coloring) and spices.

Although the original recipe calls for pork tongues, which are relatively small, I’m cooking a big beef tongue using the same recipe. I simmer it first until completely tender. At this point the tongue can be sliced and used as a cold cut (great on sandwiches with coarse salt, Dijon mustard and pickles) or cut up to finish cooking in the sauce.

The cooking wine, Andalusian style, is one of the wines of the region—Sherry (from Jerez, in Cádiz province) or a similar fino from D.O. Montilla-Moriles (Córdoba province). The fino, usually served as an aperitif wine, goes very well with the braised tongue as a dinner wine.

Use this basic recipe for the braising sauce, with almonds, garlic, saffron and Sherry, for cooking beef, lamb and chicken stews.

Wash the tongue in running water. Put it in a basin and rub it all over with salt. Cover with water and allow the tongue to soak in salt water for 30 minutes. Drain and rinse again. (The soaking removes any blood from the tongue.)

Put the tongue in a large pot with the 12 cups of water. Add 1 tablespoon of salt, 1 teaspoon of peppercorns, the vinegar, celery, onion, leek, carrot, parsley and bay leaves. Bring to a boil, reduce the heat to a simmer. Cover and cook the tongue until tender when probed with a fork, about 2 hours. Turn the tongue once or twice during cooking.

Remove the tongue from the pot, reserving the broth. When the tongue is cool enough to handle, slit the skin and peel it off. Cut the tongue crosswise into thick slices or chunks.

Heat the oil in a cazuela or pan and fry the bread with 4 cloves of the garlic and the almonds, turning until they are browned. Remove.

Add the onion to the oil and sauté until softened. Add the tomatoes and fry a few minutes.

In a mortar, crush the saffron with 10 peppercorns, the clove and ½ teaspoon salt. In a blender or mini-processor, grind the fried bread, garlic and almonds with remaining clove of garlic. Scrape the saffron-pepper mix into the blender and add the fino Sherry. Process until fairly smooth.

Pour the paste from the processor into the pan with the tomatoes. Add 2 cups of the reserved broth in which the tongue was cooked. Add the pieces of tongue and the potatoes. Simmer the stew, partially covered, until potatoes are tender, about 45 minutes. Add the cooked peas shortly before serving. 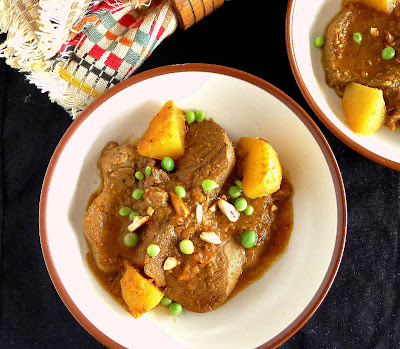