A SPANISH DINNER FOR COLUMBUS DAY

Leafing through my collection of menus and recipes from the late, lamented Gourmet magazine, I came across this menu for a Spanish Dinner for Columbus Day. That settles today’s menu plan.


The headnotes to the recipes in Gourmet (October 1990):
“When Christopher Columbus embarked on his now-famous venture of discovery, it was the Spanish who supported him. In the name of King Ferdinand and Queen Isabella, he staked a claim in what would become known as the New World. Today’s American host can honor Spain with the Columbus Day dinner of arroz con pollo, escarole salad with fresh tarragon, and prune Sherry ice cream, savory flavors welcome under any flag.”

Columbus Day, a national holiday in Spain, is October 12, no matter which day of the week it falls on. In the U.S., the holiday—not observed in every state—is always the second Monday of October.

Arroz con pollo, rice with chicken, is a great dish for the day, illustrating nicely the Columbian Exchange—rice, chicken and olive oil from the Old World and tomatoes and peppers from the New World. (See my recipe for Arroz con Pollo here.) And, while fresh tarragon is not especially Spanish, good olive oil certainly is. The dessert, a prune-Sherry ice cream, is what got my attention.

Vino de Jerez—Sherry—was produced in Jerez de la Frontera and exported, probably from Roman times, but certainly from the first half of the 14th Century. Tradition has it that Columbus visited Jerez before setting out on his first voyage on 3 August 1492. Was there Sherry on board the Pinta, Santa María and Niña when they departed from Palos de la Frontera?

Whatever you think about Columbus, colonization, New World versus Old World, the prune Sherry ice cream is luscious enough for any occasion.

I tweaked the original Gourmet recipe a bit. I used half the quantity of sugar called for, as the prunes are so sweet on their own. I added a bit of orange juice and grated zest, which complement the Sherry flavor. And I increased the amount of Sherry very slightly. The original recipe calls for freezing the mixture in an ice cream freezer, “according to manufacturer’s instructions”. Lacking that tool, I froze the cream in a metal bowl, breaking up the frozen bits, then whipping it with an immersion blender.

I used manzanilla Sherry for the prune ice cream. I’m thinking a sweet Sherry would work just as well, reducing the need for sugar. I served the dessert with oloroso Sherry.

The recipe calls for freezing the prune cream in a 9X5X3-inch loaf pan. The loaf pan I used measures 10X4X2.5 inches.

Place the prunes in a saucepan with the ¾ cup of water. Cook the prunes until they are very soft, about 15 minutes. Add the Sherry and orange juice and simmer 1 minute more. Cool the prunes, then purée them in a blender or food processor.

In a bowl, combine 1/3 cup of sugar, constarch, whole egg and yolks. Whisk in the milk and orange zest. Place the mixture in a saucepan and bring to a boil, whisking constantly. Reduce the heat and cook the custard, whisking constantly until thickened, about 2 minutes.

Place the bowl in a second bowl of ice water. Stir in the prune purée and the cream. Stir the custard mixture until it is cold. Freeze the cream in an ice-cream freezer, if available. Otherwise, place the bowl in the freezer until the cream begins to freeze on the bottom and edges (about 2 hours). Break up the frozen bits and mix with the rest of the cream. Return to the freezer until partially frozen. Use an immersion blender to whip the ice cream.

Line a metal loaf pan with plastic wrap, leaving an overhang. Ladle the prune-custard mixture into the pan. Fold the plastic to cover the top. Freeze at least 8 hours or overnight.

Place remaining 1 cup of sugar in a heavy pan. Cook over moderate heat until the sugar melts. Increase the heat and cook the sugar without stirring, swirling the pan occasionally, until the sugar turns a deep caramel color. Remove from heat and, very carefully, pour in the cup of hot water. Sugar will bubble and splutter, so take care. Return the pan to the heat and cook, stirring to blend the caramel, until the sauce is syrupy and reduced to ¾ cup. (The sauce keeps, covered tightly, up to 1 week.)

To serve the ice cream. Remove the loaf pan from the freezer. Fold back the overlapped plastic wrap on top. Invert the pan onto a plate. Place a damp cloth on the bottom of the pan to loosen the ice cream.

When it is unmolded, peel off the plastic wrap and discard. Use a serrated knife dipped in water to slice the ice cream crosswise.

Serve the ice cream with the burnt sugar sauce. Scatter almonds on top. 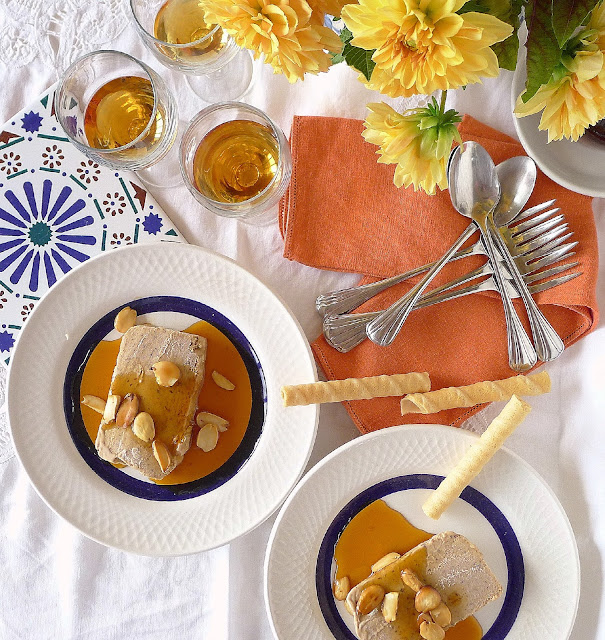 Here’s more about Columbus Day and the Colombian Exchange of foods between continents:
https://mykitcheninspain.blogspot.com/2013/10/columbus-day-east-meets-west.html 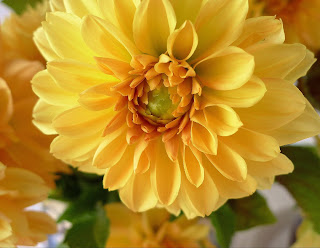