A DESSERT FROM WINE COUNTRY

The vendimia finished, grape juice percolates in vats, magically turning into wine. Spain, third in wine production worldwide, has a deep tradition of foods associated with the vendimia. One is gachas de mosto, a traditional dessert made from mosto, grape “must,” the juice before it is fermented.

Gachas is somewhere between a confection and a pudding. It is undoubtedly of Moorish origin and is somewhat similar to Turkish delight, which in turn is a variation on halvah, which, long ago, was also made with thickened grape juice.

The grape must is boiled down to a sweet syrup, then thickened with flour. Depending on the sweetness of the grapes, it needs no added sugar. (There is also a savory version of gachas that does not use grape juice.)

In Málaga province, region of famed muscat wines and raisins, the juice for this traditional dessert comes from Moscatel de Alejandria grapes. In Jerez, the Sherry varietal, Palomino, is used. In La Mancha, where the gachas are also called mostillo, the most common grape used to be the Airén, but now the sweet is made with Tempranillo (red). In Córdoba, where gachas de mosto is a typical sweet for the holidays of Todos los Santos (All Saints’ Day), November 1, and Fieles Difuntos (Day of the Dead), November 2, the Pedro Jiménez grape of Montilla-Moriles forms the base of the dessert.


A friend gave us a basketful of Moscatel grapes, inspiring me to make juice. I picked off the stems and stalks, popping the grapes as I plopped them in a big bowl. I used my hands to knead them to release the juice (not a large enough quantity to bother getting my feet sticky). I strained out seeds and skins, pressing on the pulp to get as much juice as possible. Fruit flies began swarming almost immediately.

One pound of grapes made approximately one cup of juice. I had about three cups of juice. I bought bottled mosto, a pasteurized, unsweetened grape juice (nowadays made from concentrate) to combine with the fresh-pressed juice for making the dessert.

Typically, gachas is thickened to make a paste so stiff that, after cooling, it can be sliced or even cut into shapes. Some wine-country chefs have re-invented the whole concept, thickening the reduced grape juice very lightly and aerating it in a siphon to make “foam.”

I chose a version midway between—the following recipe makes a dessert like wobbly Jello. (But, with no gelatine, it is vegan.) Its sweet, winey flavor is delicious alongside baked apple or spiced pears. While not traditional, whipped cream or Greek yogurt goes nicely with it.

Fresh-pressed mosto or grape juice will create a lot of froth as it comes to a boil. Skim off all the foam that rises to the top.

If you don't have mosto, use any unsweetened grape juice.

The easiest way to calculate whether the juice has reduced by half, rather than measuring volume, is to measure the depth of juice in the pan before cooking (use a ruler). When it has reduced to half of that depth, it’s ready.

I used as a mold a 8.5-inch X 6.5-inch Pyrex pan. Cut into 2-inch squares, the recipe makes 12 servings. The gachas mixture can also be ladled into individual dessert cups.

I used blanched and skinned almonds, fried in olive oil, to garnish the pudding. Sesame seed or walnuts are also traditional.

Reserve 1 cup of the grape juice. Place the remaining 8 cups of juice in a large pot with the strip of orange peel, cinnamon and cloves. Bring to a boil, skimming off any froth that rises to the top. Lower the heat to medium-high and continue cooking the juice until it is reduced by half (4 cups). This can take from 50 to 60 minutes. Skim out and discard the orange peel, cinnamon stick and cloves. Let the juice cool slightly.

While the grape juice reduces, beat together the reserved 1 cup of juice and the flour until completely smooth (a blender works well for this).


Return the reduced juice to the heat. Whisk in the juice-flour mixture. Cook, stirring constantly with a wooden spoon or paddle until the mixture is thick and completely smooth, about 10 minutes.

Have ready a mold or 12 individual cups lightly greased with olive or almond oil. If using sesame seeds, scatter them on the bottom of the mold. If pudding is to be served directly from the mold or cups, decorate the top with almonds or walnuts.

Pour the thickened juice into the mold or cups. Let set until completely cool. Cover with plastic wrap and refrigerate at least 8 hours.

To serve, loosen around the edges of the pudding with a knife. Place a serving dish on top of the mold and invert the mold so that the pudding releases onto the platter. Sprinkle the top with toasted almonds or walnuts. Cut into portions to serve. Sprinkle with cinnamon, if desired. Accompany with whipped cream or Greek yogurt, as desired. 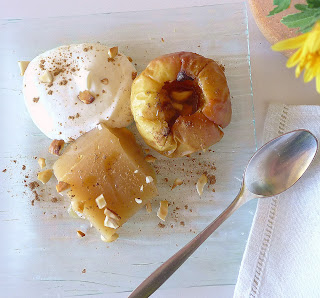 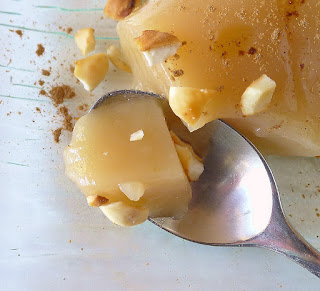