Before I came to live in Spain (more than 30 years ago), I had never seen pumpkins, except the snaggle-toothed jack-o-lantern sort, nor eaten them, except baked in a pie shell with lots of sugar and spice. In Spanish markets I was amazed to find giant pumpkins (calabaza), dark green and grooved on the outside, bright orange flesh on the inside.

Market vendors carved off thick slabs to sell to individual shoppers. It would take a week or more to sell off a whole pumpkin.

I asked my neighbors how they cooked the pumpkin. Some of the replies: Added to a berza (stew with chickpeas, vegetables and sausages); in boronia, a vegetable stew; cooked with sugar and spices to make a thick marmalade to use as a filling for empanadillas (aha! Spanish pumpkin “pie”); “fried” with a touch of vinegar and oregano; candied in grape syrup.

Nowadays, pumpkins seem to come in smaller dimensions, rather like pie pumpkins. And butternut squash is also grown locally and used interchangeably for true calabaza.

“Fried pumpkin”  is the sort of frugal dish—pumpkin, bread and olive oil—that can be stretched to feed a family. Bread thickens the cooking juices, making a tasty sludge. Vinegar and oregano punch up the flavors. I have adapted the traditional recipe, using the bread to make crisp croutons to toss with pumpkin.

This makes a great side dish with roast turkey or grilled sausages. Leftovers can be pureed for a soup. 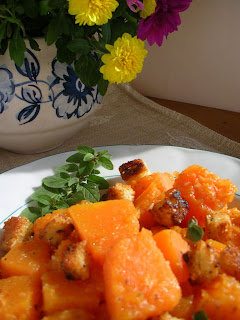 Remove seeds and peel the pumpkin. Cut the flesh into 3/4-inch cubes. Cut the bread into ½-inch dice.

Heat 3 tablespoons of the oil in a cazuela or deep skillet. Fry the bread cubes and the whole garlic cloves. Remove them when toasted and golden. Reserve the toasted croutons.

Place the garlic in a blender with the vinegar, oregano, pimentón and water and blend until smooth.

Add remaining oil to the pan. Add the cubed pumpkin to the oil and sauté it for 3 to 4 minutes, turning to brown the pumpkin lightly. Add the lemon peel, salt and garlic-vinegar mixture from the blender. Reduce heat, cover the pan and let the pumpkin cook slowly for 10 to 15 minutes, until tender. Add additional water if needed so the pumpkin is juicy.

Immediately before serving, toss the pumpkin with the crisp croutons.

In wine producing regions, such as La Mancha, a very old way to preserve fruit is by cooking it in grape must (the juice extracted from grapes in the first step of wine making, before fermentation takes place). The must is boiled to a thick syrup, then fruits such as quince and apples and vegetables such as pumpkin, eggplant and sweet potatoes are cooked in the syrup.

This recipe is an adaptation. It is not a preserve, so refrigerate and use within a few days. It’s gorgeous with a dollop of crème fraîche or Greek yogurt to top the compote.

Use white or red grape juice with no sugar added. You can also use wine, but then you will need to add sugar.

Put the juice or wine in a pot with the orange and lemon, cinnamon and cloves. Bring to a boil, then simmer until reduced by half. While it is cooking, peel the quince, cut out the core and cut the fruit into bite-size cubes. Add to the grape juice.

When juice is reduced, add the pumpkin, cut in bite-size cubes, and the figs. Simmer until pumpkin is just tender, about 10 minutes more.

Discard orange and lemon slices, cloves and cinnamon. Cool the fruit, then store, covered and refrigerated.