OFF TO SEE THE RUINS

While my friend Donna from New York was visiting last week, we made an excursion to see the Roman ruins of Baelo Claudia. Situated right on the wind-swept beach of Bolonia, near Tarifa in the Straits of Gibraltar—the southernmost tip of Europe—the ruins are of a fairly substantial town that thrived from the 2nd century BC until 2nd century AD.

Temples, market, forum, amphitheater make up excavated ruins. And, beside the sea, are pits where garum, the salsa of the ancients, was produced. Garum, made of tuna guts fermented, brined and seasoned, was the earliest manufactured food produced in Spain and shipped back to Rome.

If in Roman times this was a thriving commercial port, nowadays it is a quiet beach where cattle mosey almost to the water’s edge and kite surfers crisscross the sky. North Africa looms in the haze over the sea (this is the Atlantic).


I love landscapes, seascapes and Roman ruins, but what I really like about excursions is lunch. Just beyond the archeological enclosure are several chringuitos, beach-shack restaurants. Ensconced on a terrace out of the wind, we ordered a lunch of fresh seafood.

Coquinas, small wedge-shelled clams, cooked with garlic and wine, para picar, to share while our fish cooked, then a whole grilled fish for each of us.


We chose borriquete, identified in Alan Davidson’s book, The Tio Pepe Guide to the Seafood of Spain and Portugal (Santana Books, 2002) as “rubber-lip grunt,” a type of bream, because it looked marvelously fresh. The waiter told us it is fished right off this coast, whereas the sea bass come from a piscifactoria, or fish farm.

The fish (priced by weight—and these were big ones!) were simply grilled on a plancha, a flat griddle. No sauce was served with it (some garum, perhaps?), but roasted red peppers and patatas fritas came alongside. We devoured every morsel. The flesh was sweet and moist, the skin crackly.

In Andalusia, tiny clams such as the wedge-shells in the photo are prepared this way, with garlic, parsley and wine. But you can use slightly larger Manila clams too. This is usually served as a plate for sharing. Place the pan in the middle of the table and accompany with chunks of bread for sopping up the sauce.

Serves 3 to 4 as a shared starter. 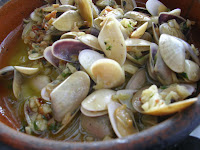 Wash the clams in running water. Discard any shells which are opened or cracked.

In a cazuela or deep skillet heat the oil and sauté the garlic 1 minute. Stir in the flour, then add the clams. On a high heat, add the wine, water and chili. Cover and shake the pan until the clam shells open. This takes 3 to 4 minutes.

Remove from heat when most of the shells have opened. Top with chopped parsley. Serve immediately with bread.