We were shopping at a weekly outdoor organic farmers’ market, held in four different inland villages on consecutive weekends, this week in Cártama Estación (Málaga province). The village where I live, on a hillside overlooking the Costa del Sol, has lost its agricultural roots. But inland, in the Guadalhorce Valley, farming is still important. ( http://www.guadalhorceecologico.es )


I was delighted to meet an old acquaintance at the market. She is Elly Sleumer, a Dutch woman who was a pioneer in organic farming in southern Spain. I first met her 20 years ago when I wrote a magazine article about her. She had walked away from a high-powered job that was taking its toll on her health, moved to Spain and bought an abandoned farm with a ruin of a house. Here’s what Elly said back then:

“When Spain entered the Common Market, I started a citrus cooperative here. That's where I learned the commerce of fruits and vegetables. I was the link between the market and farmers. I represented the Spanish Citrus Corporation on various commissions in Brussels.

“Once I got started in farming, I was horrified at what local farmers were using—loads of pesticides and chemical fertilizers. I come from northern Europe, where already there was a different vision about the environment, about working with nature. I feel connected with the earth. For me, ecological farming is a life-style.

When Elly got her certification as an organic grower, there were fewer than 200 in all of Spain. Now there are thousands. Elly’s farm and organic produce business, Nature Present, is still going strong, only now her grown children run it.


Back when I first visited Elly’s farm, I made an interesting observation. Standing in a field of organically grown, ripe tomatoes, I picked one and took a bite out of it. Yes, it was better than the tomatoes in the supermarket—but not a lot better. Her business consisted of shipping organic tomatoes to Britain and Germany, so she was growing the same commercial variety as the non-organic growers. Bred for resistance, not flavor. Her tomatoes today were a revelation—heirloom varieties, packed with flavor. We selected a dozen of those beauties.

My menu was shaping up. A plate of sliced tomatoes. That goat cheese, sliced and fried, with a quince sauce, then chicken braised with all those vegetables we had bought. As there was no meat at the organic market, I needed to make a stop at my local butcher who sells free-range poultry.


Chicken with Eggplant and Zucchini
Pollo en Samfaina
Samfaina is a Catalan “sauce” of eggplant, peppers and zucchini. Serve the chicken and vegetables accompanied by fried bread, rice or noodles.

The Catalans have an interesting technique for preparing tomatoes: grated instead of chopped. Slice off the tops and stems of the tomatoes and grate them on a box grater, saving all the juice and pulp. The skin acts as a shield so you don’t grate your knuckles. 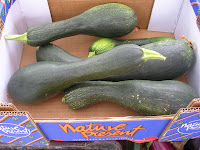 Add the remaining oil to the cazuela and sauté the bacon, eggplant, peppers, zucchini, onions and garlic for 5 minutes. Add the tomatoes, Sherry, salt and pepper, bay leaf, oregano and parsley.

Use semi-cured Spanish goat cheese, which is tangy and salty. This makes a lovely starter served atop salad leaves with toasted pine nuts and a sweet-sour quince sauce.

Slice the cheese 3/8 inch thick. Depending on shape of the slices, divide them to make 10 slices that are more or less the same size.

Put the flour and egg in two shallow bowls. Place the bread crumbs in a shallow tin and add the cumin seed. Dredge the cheese slices in flour and pat off excess. Dip them in beaten egg, then coat in breadcrumbs.

Place 1 teaspoon of the oil in a small frying pan and toast the pine nuts until they are golden. Remove.

Place remaining oil in a large frying pan and place over medium heat. Fry the cheese slices until golden brown, about 1 minute per side. Drain on paper towels.

Place greens on salad plates. Top each serving with a slice of fried cheese. Garnish with sliced apple and a scattering of pine nuts. Drizzle the quince sauce over the cheese. Serve immediately, while cheese is still warm.

Salsa de Membrillo
Quince Sauce
Quince is an autumn fruit so rich in pectin that, when cooked with sugar, it sets up into a solid paste that can be cut into cubes (dulce de membrillo). A handy ingredient to keep in the pantry, quince paste can be turned into a quick sauce, delicious served with pork, with cheese croquettes, with foie gras, with duck. The sauce thickens as it cools. Serve it room temperature or reheat it in a small pan.

Cut the quince paste into pieces and place in a blender with the vinegar and boiling water. Blend until quince is smooth.