“Patatas a lo pobre should have crisp edges,” said my in-house critic. I had made the dish—sliced potatoes baked with onions, peppers and wine—to accompany a roast pargo, an impressive 4-pound sea bream.


It was a recipe I learned many years ago in pueblo kitchens. Potatoes and vegetables are layered in a roasting pan and fish (or pieces of chicken, lamb or baby goat) is placed on top. Lots of olive oil and a glass of wine and into the oven. The juices from the fish mingle with the potatoes. It’s a delicious dish, but, no, the potatoes don’t have crispy brown edges.

In fact, my potatoes were not true patatas a lo pobre. They were closer to patatas panaderas, “baker’s potatoes.” The verdadero patatas a lo pobre never sees the inside of an oven, but is done entirely in a deep skillet. While it got its name—“poor folks’ potatoes—as an economical family meal with no meat, now it is served as a side dish with fish, meat, chicken, rabbit or fried eggs.

Facing up to the criticism—and my own error in naming—I was determined to make real patatas a lo pobre, with potatoes with browned edges. Here are the results of my testing.

The procedure—Cook the sliced potatoes, onions and strips of green peppers in a large quantity of olive oil. Spanish cooks say to “confitar” the potatoes. You will “poach” the potatoes in oil, without letting them brown. No wine or other liquid is added. Use a medium heat.

How much is a large quantity of oil? At least un dedo deep, or about ½ inch. That’s about 2 cups of oil for 2 pounds of potatoes. Don’t freak! Once the potatoes are cooked, you’re going to drain off the oil. (Strained, it can be used for other purposes, such as frying eggs to accompany the potatoes.)

I measured the oil drained from the potatoes; it measured 1 2/3 cups. Meaning only 1/3 cup of (flavorful) oil had been absorbed by the potatoes. Mind you, this only works with extra virgin olive oil!

How long to cook the potatoes in oil? That depends on the variety of potato you use. I recommend the Kennebec variety, which gets tender without disintegrating. I used a round white baking potato that was tender in barely 10 minutes. But, when I proceeded to the next step, the potato slices tended to break up.

The next step is to drain off as much oil as possible. A heat-proof, metal colander or sieve is useful for this. You might want to ladle the potatoes out of the pan, as tipping a heavy skillet full of hot oil and potatoes is tricky.

Return the potatoes to the skillet and turn up the heat. Let them brown somewhat on the bottom and edges, but don’t try to stir them.

Alternatively, to avoid breaking up the sliced potatoes: after draining off the cooking oil, carefully transfer the potatoes and vegetables to a baking pan. Preheat oven to 350ºF with convection fan or 375ºF conventional setting. Roast the potatoes until the edges begin to brown, 15-20 minutes.

Peel the potatoes and slice them about ¼-inch thick. Wash the slices in cold water, drain and pat them dry.

Cut the onion into quarters. Slice them, stem to root end, in julienne. Discard seeds from peppers and cut them into 1-inch pieces. Lightly crush the garlic just to split the skins. Don’t peel the garlic.

Put enough oil in a deep skillet or wide pan to measure ½ inch deep. Place on medium heat and add the potatoes. When oil is hot, add the onions, peppers, garlic and bay leaf, if using. Moderate the heat so the potatoes cook slowly, turning them with a wooden spatula, until they are tender when pierced with a knife. Do not allow them to brown.

Place a heat-proof (metal) colander or sieve over a heat-proof bowl. Either carefully tip the potatoes into the colander, allowing the oil to drain into the bowl, or use a slotted spoon to ladle the potatoes out of the pan, then drain off the oil. If desired, discard bay leaf and garlic cloves.

Preheat oven to 375ºF or 350ºF using the convection fan.
If using an oven-proof skillet or pan, return the potatoes to the pan. Otherwise, spread them in an oven pan. Add salt and pepper and carefully mix.

Place the potatoes in the oven until they begin to brown on the edges, about 20 minutes.

Remove from oven. Scoop potatoes from the pan onto plates or onto a serving platter. Garnish with chopped parsley. 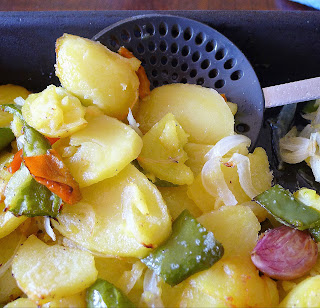