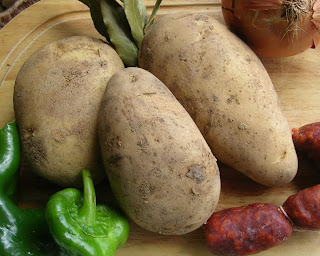 Can you imagine life before potatoes? Unless your origin is, perhaps, Peruvian, there was such a time--hardly 500 years ago--when potatoes didn’t exist. No fries. No jacket potatoes. No mashed. No potatoes. Not in Ireland. Nowhere in Europe. Not in India, nor China. Not in North America.

It wasn’t until some 40 years after Columbus set sail from Spain that potatoes found their way to the Old World and, much later, back to the New World.

The potato is native to the high Andes regions, where the Indians were eating it as early as 3000 BC, although it was unknown through the rest of South and North America. It was “discovered” in Ecuador by one of Francisco Pizarro’s band of explorers, and brought  to Spain in 1534.

The potato was cultivated as a curiosity in monasteries, but, at first, hardly anyone dared eat it’s tuberous root. Related to poisonous nightshade, the potato was believed to be dangerous and, because it’s not mentioned in the Bible, ungodly. Nevertheless, potato eating spread widely in Europe amongst hungry people, who discovered the tuber easy to grow on poor soil. In Spain it soon displaced other starches such as dried chestnuts as sturdy addition to lentil and garbanzo stews.

It wasn’t until the famine of 1770, when Antoine Parmentier in France won a prize for a study showing how the potato could be the solution to famine, that the potato really gained culinary ground. Parmentier launched a heavy-duty public relations campaign promoting the potato.

There’s no record explaining how the potato got to Ireland, although some stories say it arrived there around 1586, possibly from ships of the Spanish Armada wrecked on the Irish coast. Much later it was Irish settlers who carried potatoes to North America. So, from the New World (South America) to the old, Spain, and back to the new.

In Spain potatoes are, after bread, the most favored food-stuff. Patatas fritas, Spanish fries, preferably fried in olive oil, are a standard side with the Spanish meal and, of course, potatoes are the essential ingredient for a Spanish tortilla.

While potato dishes are to be found in every region of Spain, the Canary Islands, the stopping-off point between the New World and continental Spain, are a veritable Garden of Eden of potatoes, with many heritage varieties still grown. .

Read my story about “wrinkly potatoes,” papas arrugadas, from the Canary Islands in this week’s LOS ANGELES TIMES food pages. Cooking in heavily salted water wrinkles the potato skins and leaves them with a light crusting of salt. They are delicious served with baked or grilled fish and Canary Island mojo sauces. (Click HERE for the story and follow the links for recipes.)

Here is a recipe for a potato dish from La Rioja, in northern Spain. A robust Rioja crianza, a red wine with a little time on oak, would go nicely with the potatoes. 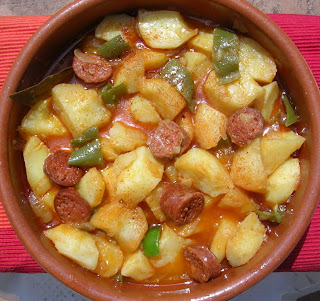 Potatoes, La Rioja Style
Patatas a la RiojanaLa Rioja cooks say you shouldn’t cut the potatoes with a knife, but rather cut them slightly, then break them into pieces. The rough broken surface releases more potato starch, which is what thickens the cooking liquid.This dish can be served, instead of soup, as a starter or main dish.Serves 4. 3 pounds mature baking potatoes, such as russets¼ cup olive oil1 onion, chopped1 small green pepper, cut in 1-inch pieces1 tablespoon pimentón (paprika)pinch of cayenne1 bay leaf1 teaspoon salt2 cups water12 ounces chorizo sausage links, slicedPeel the potatoes and cut and snap them into chunks of about 1 ½ -inch. Heat the oil in a cazuela or heavy skillet and sauté the onion until softened, about 5 minutes. Add the potatoes and turn them in the oil for another 5 minutes. Add the green pepper, pimentón, cayenne, bay leaf, salt and water. Bring to a boil, then lower heat so potatoes cook gently for 10 minutes. Add the chorizo to the potatoes and continue to cook for another 25 minutes, or until the potatoes are tender.Let the dish rest for 10 minutes before serving. The cooking liquid should be thickened to a sauce consistency.
Posted by JANET MENDEL at 7:47 PM