TO MARKET, TO MARKET--- BARCELONA'S BOQUERIA

Mountains of strawberries, heaps of artichokes, oceans of escarole, rafts of olives. Shrimp in every size and color. Lobsters waving their feelers. Snails oozing out of string bags. Glistening tuna, stacks of salt cod. Barcelona’s Boqueria market stuns the senses.

As I wandered through the crowded market, which is situated just steps off La Rambla, even my olfactory senses were aroused. Near the meat stalls, the sweet smell of freshly-butchered spring lamb permeated the air. At the stand of mushroom seller Llorenç Petràs, the earthy fragrance of damp forest wafted through the air. Aroma of nectar from the fruit stalls, where fresh juices were being pressed. The sharp smell of vinegar and brine prickled the taste buds at the stalls selling olives (more than a dozen varieties!), pickles and capers. 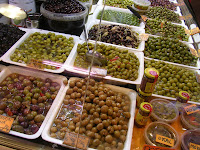 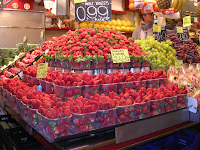 Aroma of garlic and shrimp sizzling in olive oil drew me to the bar of El Quim de la Boqueria, situated right in the middle of the sprawling market. Here we enjoyed a late breakfast with pink cava (bubbly) and a variety of small plates. Quim Marquez opened the bar in 1987 with only five stools. As his popular market cooking attracted attention of locals and visitors from abroad, he eventually expanded to 18 stools.

Some of the dishes we sampled: chunks of lightly-grilled tuna with a soy and balsamic glaze; tiny fried fish served with a fried egg, to be quickly broken up into the fish; savory shrimp sautéed with garlic, red chili flakes and, according to Quim, a reduction of cava; winey, briny cockles, and, my favorite, crisply-fried sliced artichoke hearts.


I met another Quim at the market—Quim Marqués, chef/proprietor of the renowned restaurant, Suquet de L’Almirall, on the old port in the Barceloneta district (Passeig Joan de Borbó, 65). The restaurant specializes in seafood and rice dishes.

Today Quim was bagging spindly wild asparagus, baby fava beans and spring morels. I asked him how he was going to prepare them.


“Sautéed with shrimp,” he said. “Anything else added?” I asked. “No, good things like these don’t need anything more.” (See the recipe below.) Quim’s sister has a kitchenwares stall at the back of the Boqueria, where I bought a copy of his cookbook, La Cocina de la Barcelona Marinera (Barcelona’s Seaboard Cuisine), by Quim Marqués.


I marvelled at the exquisite selection of fresh fish and shellfish on sale at the Boqueria—and also at the extravagant prices!

But, according to Susanna Barquín i Castany, a Catalan novelist who used to live near the market (she now works for Prodeca, the Catalan export promotion board, and was one of my Barcelona guides), the Boqueria is really two markets—an up-market where chefs and the well-to-do shop, where shrimp costs more than € 25/ kilo (2.2 pounds), and the people’s market, where working-class folk can find good produce at reasonable cost. She said that fresh fish that doesn’t sell on the first day moves to another stall for sale at a lower price, and, on the following day, prices are slashed yet again.

The downside of being a visitor to the Boqueria is not having a nearby kitchen. (Market-cuisine cooking classes on Thursdays; to reserve: 93 412 1315.) But, as I was returning to southern Spain by air, I bought a few ingredients that I wouldn’t find in my own local markets: morels and chanterelles; mongetes, small dried white beans; bull blanc, a spicy cooked white sausage; tiny Arbequina salt-cured olives.

This is my adaptation of the dish that Quim Marqués told me he was making one spring day at his restaurant Suquet de L’Almirall. I bought the morels at the same stall he did at the Boqueria and brought them back to southern Spain. I substituted thin cultivated asparagus for the wild. I picked the baby fava beans (also called broad beans) from my garden (more on those in future posts). Regrettably, I used frozen shrimp instead of those glistening-fresh ones I saw in Barcelona. Nevertheless, this was a brilliant dish, quick to prepare, full of seasonal flavor. My own addition—snippets of wild fennel fronds, as much for the aroma of springtime as for flavor. 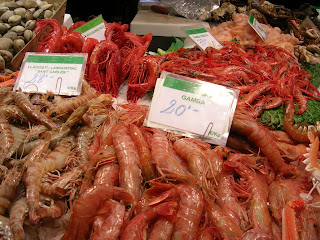 I took notice that everywhere in Barcelona—for different tapa dishes, in paella rice—shrimp invariably was cooked with the heads left on, the bodies peeled. The roe in the heads contributes enormous flavor. It can be sucked from the shells or mashed into rice or sauce.

Serve this as a starter or light luncheon dish. 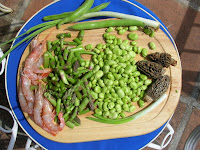 Heat the oil in a skillet and sauté the shrimp in a single layer. Turn them to cook both sides. Remove the shrimp and set aside.

Add the fava beans, asparagus, scallions and morels to the pan. Sauté on a medium heat until favas and asparagus are crisp-tender, about 7 minutes. Season with salt and pepper. Return the shrimp to the skillet and reheat.

Serve garnished with sprigs of fennel, if desired.