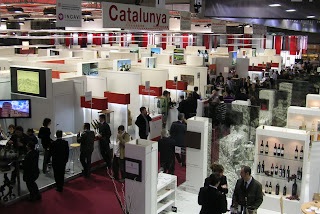 No wonder I gained a few pounds! In the space of three days visiting Barcelona’s Alimentaria, one of the world’s biggest food trade fairs (94,500 square meters of exhibition space, with 4000 companies showing their wares, attended by about 140,500 professionals), I probably tasted 40 different cheeses (with accompanying bread); 10 different olive oils (bread for dipping); lashings of ibérico ham (with bread, of course); as well as myriad tapas, nibbles, snacks, small bites, amuse gueles.
Here are some tasting notes.
Olive Oil
I received an overview of Catalan olive oils at a cata, a tasting, directed by expert Agustí Romero. Four different Catalan oils demonstrated how olive variety, terroir and growing conditions determine the sensory values of the oil.
Iberolei, of DOP Baix Ebre-Montsià, is a coupage of Morruda, Sevillenca and Farga olives (no Arbequina!) from the southern part of Catalonia near the Ebro river delta, a Mediterranean climate and zone of millenial olives trees. This is a fresh, slightly sweet, aromatic oil.
Antara, from DOP Siurana, of Arbequina olives has a distinct almond taste and a nice balance of sweet and bitter. Olive trees are intergrown with hazelnut trees in this region of Tarragona. Olives from coastal plains and highlands are combined to make the oil.

Olicatessen is another Arbequina oil, this one organically grown from the inland Les Garrigues region, where rough topography and extreme weather contrasts produce an exceptionally fruity oil, slightly spicy with hints of green almond.
Oli de Pau is made from the Argudell variety, grown in the northern region of PDO Oli de L’Empordá, where hundred-year-old trees and a very modern extraction plant contribute. The oil is sweet at first taste, then bitter, herbal and intense.

At another tasting, this of “boutique” extra virgin oils created by Josep Ros, a former radio and TV personality, who is director of Jade, I learned that one sense not used in olive oil evaluation is visual—blue-tinted cups are used, so that the oil’s color and transparency do not predispose its olfactory and taste sensations. One of the four oils, Mil-ènium, made from ripe Farga olives, had a  tomato leaf aroma and a subtle banana flavor. Famed chocolatier, Oriol Balaguer, used the oil to create a sensational bon-bon, a cream center of oil emulsion encased in melt-in-the-mouth chocolate. 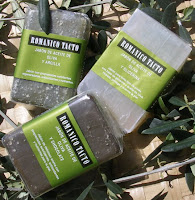 Olive oil seems to have an affinity for chocolate, for the combination turned up elsewhere. At the stand of Agroles, which produces the superb range of Romanico brand oils, including an organic one, I discovered olive oil and chocolate soap. Looks good enough to eat! I did taste their marvelous marcona almonds fried in extra virgin olive oil.
Flavored olive oils are definitely a trend. The well-known producer, Pons, makes a range of flavor-infused oils, some with herbs, garlic, smoked pimentón, white truffle. The orange citric oil, of 60 % Arbequina olive and 40% orange, made me crave a plate of fresh asparagus to drizzle it on. 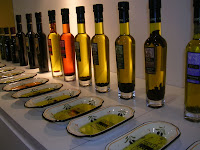 Tucked into the vast hall where individual producers and regions exhibited their products was an invitation-only stand called SPAIN, LAND OF 100 CHEESES, where guests could sample from a “buffet” of cheeses (actually 136) from every region of the country.  On one day I attended a special tasting of Asturian cheeses and, the following day, of cheeses from Catalonia. 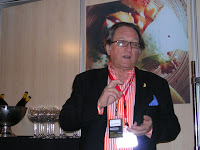 “Asturias is a paradise of artisanal cheese,” said Gerry Dawes, an American gastronomy writer, who recently spent a week in that northern region visiting  small producers (see his blog here here ). Gerry suggested sipping white or rosé wine with cheese, as the slight acidity points up cheese flavors, which would be lost with a complex red.

We sampled a buttery cow’s milk cheese (“let it dissolve in the mouth, like a caramel,” said Gerry); a crumbly sheep’s milk cheese; a nutty, cured goat’s milk cheese; the unusual Afuega ‘l Pitu (sort of stinky, but good), and the wonderful mild Gamoneu, blue veined with a mushroomy aroma. (The better-known Cabrales, a blue with bite, was in a take-home sample pack.) All are commercialized by Marino Gonzalez of COASA, a firm specializing in the farmhouse cheeses of Asturias. 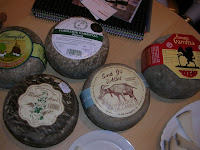 The cheeses of Catalonia are not so well-known, possibly because until about 10 years ago they were not widely commercialized. Some, in fact, had almost disappeared from production. Now, they are making a come-back. Garrotxa seems to be leading the pack. I once wrote that Manchego (sheep’s milk cheese from La Mancha) is the new Gruyère—a pleasing cheese that’s perfect for snacks, sandwiches, salads, cooking, anytime. Maybe Garrotxa is the new Manchego. A goat’s milk cheese (but nothing like chêvre), it is firm, creamy, nutty (hazelnut) with a slight tang. Ripened for two months, the cheese forms a mold on the rind. It’s delicious on its own, with wine, diced into salad, grilled, melted. 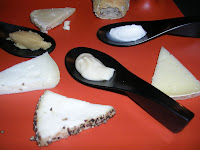 Most unusual of the Catalan cheeses: Tupí Muntanyola, a caramel-colored cheese of spreading consistency. Made of shredded cheese packed into pots (tupí) and allowed to ferment, it is flavored with sweet anisette and olive oil. It was curiously grainy and subtly sweet. 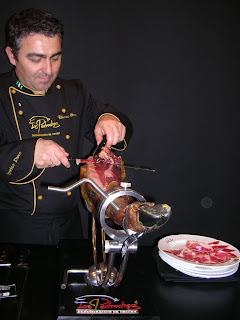 I joined a posse in search of the best  ibérico ham. We tasted our way from DO Dehesa de Extremadura to DO Jamón de Huelva to DO Los Pedroches. At the Pedroches stand, master slicer Clemente Gómez gave us a guided tour, slicing pieces from the shank, hip and rump. They were as different as if cut from different hams. Clemente said he liked best the fibrous cuts from the shank because they are most flavorful. I love it all, though the Pedroches ham was declared winner of the ham mano a mano.
Small Bites

Date and walnut bars by Paiarrop from Valencia. 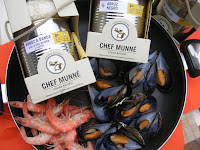 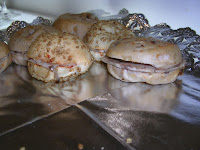 Bull blanc, a peppery Catalan sausage, delicious on tiny rolls flecked with sesame and nuts.  Many thanks to my hosts, Prodeca, Catalan export promoters, and in particular to Rosalba Arrufat, Jordi Vila and Susanna Barquín.
Posted by JANET MENDEL at 12:28 AM