As I was making ajo blanco last week with the new crop of almonds (yes, I pick them, shell them, blanch and skin the kernels), I was thinking how unique this cold soup is.  It’s more than the sum of its parts—almonds, bread, garlic and olive oil. Thinned with water and served with sweet grapes, ajo blanco is the original gazpacho. Unthinned, it is mazamorra or porra, a thick cream for spooning or dipping.


Except, as it turns out, it is not so unique. Italians have their agliata, or garlic sauce, made of bread, garlic, olive oil and vinegar, served with boiled meat or vegetables. The Sephardic community of Turkey has an ajada sauce of bread (or potatoes), garlic, olive oil and lemon juice, sometimes egg yolks too, served on roast beef. And the Greeks make skordalia, a garlic sauce originally made with bread and olive oil. Regional variations of skordalia include one made with potatoes instead of bread and another of bread plus ground almonds. Which is, basically, ajo blanco.

For variety, I decided to make the Greek version of this pan-Mediterranean sauce.

This Greek sauce can be served with fried fish or with all kinds of vegetables. I made the version with potatoes, instead of bread.

It's best to mash the potatoes in a bowl or put them through a ricer as pureeing them in a blender makes them gummy.

Cook the potatoes in boiling salted water until they are very tender. Drain, saving some of the cooking liquid in case the sauce needs thinning.

Mash the potatoes in a bowl with a potato masher or wooden pestle. Season them with pepper.

Puree the garlic in a blender with some of the oil. Gradually beat in the remaining oil, the vinegar and a spoonful of the mashed potato.

Beat the garlic-oil into the mashed potatoes. Season to taste with salt (1/2- 1 teaspoon). Add additional vinegar for a tangier flavor. If the sauce is too thick, beat in a spoonful of the reserved cooking water.

Use thin, pocket pitas for making the crisps. Separate them into layers.

Split the pita breads open. Use scissors to cut the layers in half crosswise, then in triangular wedges. Place on a baking sheet, rough side up. Brush them with olive oil. Sprinkle with salt or spices.

Bake in 400ºF oven until golden and crisp, about 5 minutes. Cool the crisps completely before storing in an air-tight container. 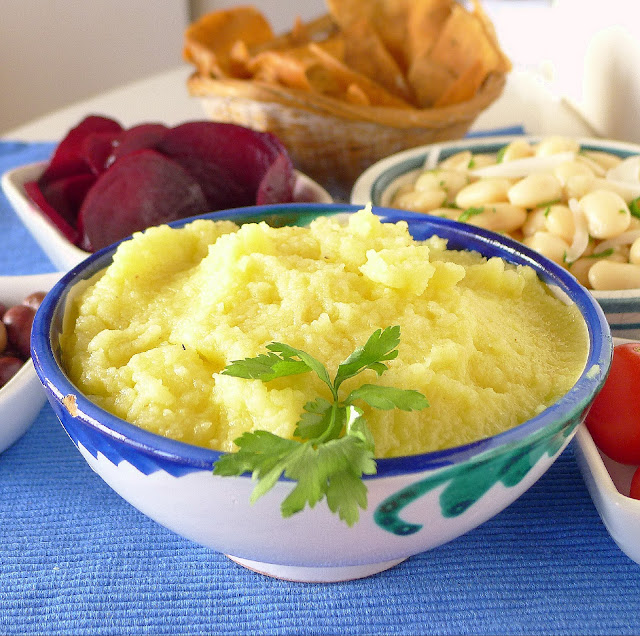