A POTATO FOR ALL REASONS

A potato is just a potato, no? That’s what I thought for years, when the only sort of potato I could find was the locally grown “Idaho” variety. It’s terrific for making Spanish potato tortilla and pretty good for patatas fritas (fries). It makes a flaky baked potato. But for making potato salads, it is a disaster, as this high-starch variety tends to disintegrate in boiling. Same issue when cooked in the olla, or stew pot.


Only in the past few years have a selection of potato types begun appearing in markets. In the big hypermercados they are labelled, para freir (for frying), para asar (for roasting), para cocido (for boiling), para guarnación (small ones, for garnishing). Plus waxy red ones and—new!—purple potatoes.

First, I cut them up and boiled them to make mashed potatoes. These potatoes did not disintegrate! They mashed smoothly, but seemed to require greater quantities of olive oil and milk than I would use with the everyday potatoes. I looked at the labels on the sack again and saw that the PDO potatoes were the Kennebec variety, an all-purpose potato developed in the U.S., especially favored by producers of potato chips (crisps to the Brits).

To honor the Galician origin, I searched for a typical Galician potato recipe and found this nice dish of potatoes stewed with wine and mussels. Tomorrow I'll test them as baked potatoes alongside a Sunday roast chicken. Next week, it's patatas fritas. Galicia's potato for all occasions. 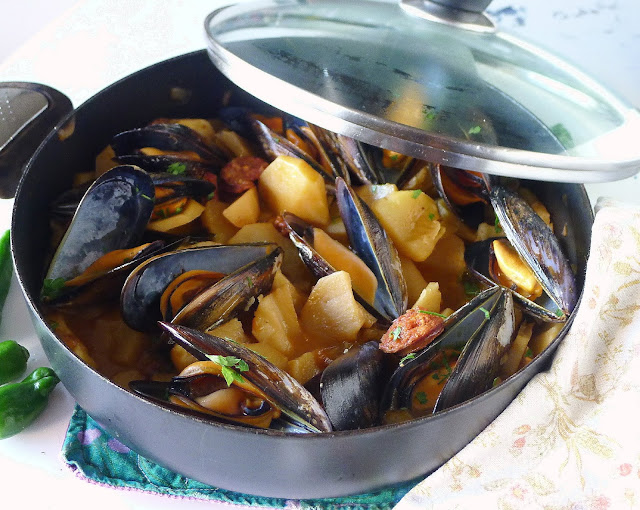 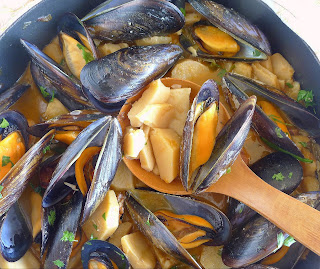 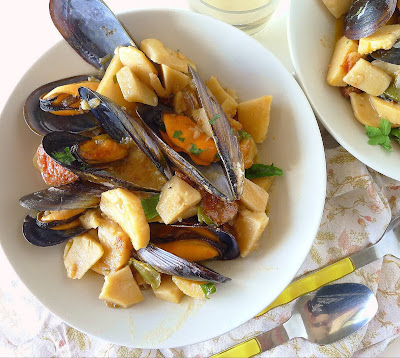 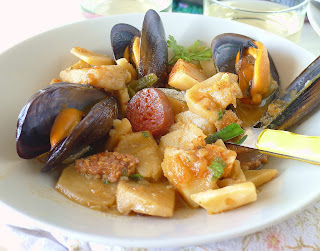 Some cooks recommend breaking the potatoes into cachos, or pieces, rather than cutting them with a knife. This is because the rough, broken surface supposedly releases more potato starch that helps to thicken the cooking liquid.

To prepare the potatoes in this manner, cut them lengthwise in half or, if large, into quarters. Pick up one piece and, with a knife, start to cut a ½-inch slice. But don’t cut all the way through; break off the piece of potato with your fingers. Turn the potato quarter, make another incision and snap off the piece.

Chorizo in this recipe acts as a flavoring agent. Use cooking chorizo rather than dry-cured chorizo. If you choose not to use it, use an extra tablespoon of olive oil and stir in a heaping teaspoon of pimentón (paprika, smoked or unsmoked).

If possible, use Padrón peppers in this dish. Padrón peppers from Galicia are bittersweet, with an occasional "hot" one. If not available, use any green or red pepper, cut in strips.

Scrape the mussels and remove beards. Wash them in several changes of water.

Peel the potatoes and cut/break them into slices. Cover with water while prepping other ingredients.

Heat oil in a cazuela or deep skillet with a lid. Sauté the onion slowly until softened, 5 minutes. Add the garlic, green pepper and sliced chorizo. Fry, turning the chorizo to brown both sides.

Drain the potatoes well and add them to the pan. Stir them with a wooden paddle to combine with the other ingredients. Pour over the wine and cook off the alcohol, 2 minutes. Add water to partially cover the potatoes, salt, pepper and bay leaf. Bring the liquid to a boil, reduce heat to a simmer and cook, covered, until potatoes are tender, about 15 minutes. Use a wooden paddle to turn the potatoes occasionally while cooking. Add additional water if needed, so that potatoes always have a little liquid and don’t scorch on the bottom.

Place the mussels on top of the potatoes. Cover the pan and continue cooking until most of the mussels have opened, 6-8 minutes. Discard any mussels that do not open.

Allow the potatoes and mussels to rest, covered, 5 minutes before serving. Garnish with a sprinkling of pimentón (smoked or unsmoked) and chopped parsley. 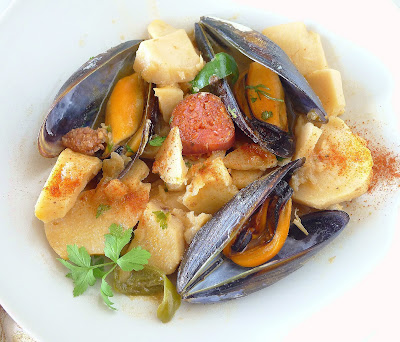