On the steep embankment below our house, we have carved out small, stair-stepped plots for planting, shored up with stones and rubble. (“We” doesn’t actually include me—my son, Ben, and a hired hand did the work.) On several levels are pumpkin and tomato patches, an avocado tree and a paraguayo tree, which this year produced its first crop of fruit.


The paraguayo, as it is known in Spanish, is a flattened peach. In spite of the name, it has nothing to with Paraguay, the South American country. In fact, this variety of peach originates in China and has gradually become known everywhere in the world. In English, it’s known as “donut peach” or “Saturn peach,” for its shape.

Like a peach, it has a slightly fuzzy skin, yellow blushed with red, and pale yellow or white flesh. The paraguayo peach is exceptionally sweet.

We have been cutting them up in fruit salad. But to celebrate, I’ve made a luscious caramel and cream sauce to serve with these lovely peaches. 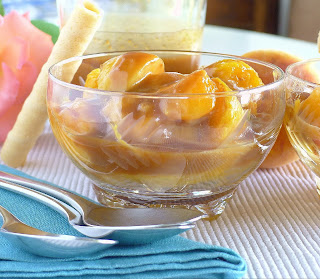 The easiest way to peel the flat peaches is to scald them in boiling water. The skins slip off easily.

Even with lemon juice stirred into the sliced peaches, they will oxidize (turn dark) in overnight chilling. They’re at their best when freshly peeled and sliced. But, that caramel sauce nicely masks the off-colored fruit—which taste every bit as good as freshly-sliced ones.

When making caramel, I like to use a light-colored pan so I can watch the sugar as it turns golden.

For flavoring, in place of the vanilla, you could use a strip of orange or lemon peel. 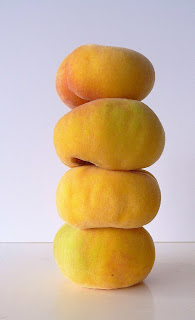 Bring a large pot of water to a boil. Have ready a large bowl of ice water. Drop the peaches into the boiling water for 30 seconds. Skim them out and place in the ice water. Peel the peaches.

Slice the peaches and discard pits. Place sliced peaches in a bowl and add the lemon juice and Sherry, if using. Cover and refrigerate, if not serving immediately.

Immediately before making the caramel, place the cream in a small pan with the vanilla pod. Bring to a boil and remove from the heat. Remove the vanilla (wash and save it for another use).

Place the sugar and water in a heavy saucepan. Heat, stirring, until sugar is dissolved and begins to boil. Continue cooking, without stirring, swirling the pan, until sugar turns golden. This takes only about 1 minute. Remove from heat.

Very carefully pour in the warm cream. The cream will splutter and foam up when it hits the hot caramel. Return the pan to the heat and stir up any caramelized sugar on the bottom of the pan, Continue cooking, stirring frequently, until sauce is reduced by about half, 6 to 8 minutes.

Cool the sauce. Refrigerate sauce if it is not to be used immediately. It becomes very thick after chilling.

To serve, spoon the sauce over sliced peaches. 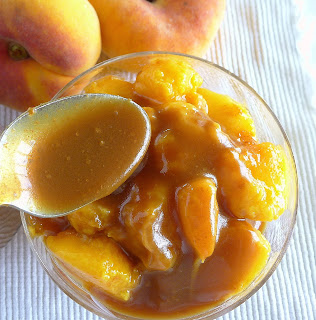 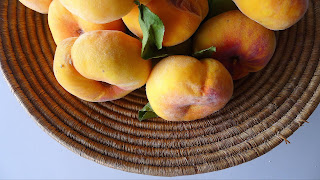