THE ALLURE OF PEACHES

It’s the fragrance, the spicy-sweet perfume of ripe peaches, that attracts me to this luscious fruit. Eaten out of hand, the sticky juice dripping from my chin, the peach is my idea of heaven.

I also serve cut-up peaches with raspberries and melon and a spritz of Sherry for a summer macedonia de frutas, a mixed fruit cup. Peach puree is gorgeous for mousse (a recipe is here ) and for ice cream (recipe here).  Peaches are an ideal fruit for pies and tarts.

Peaches originated in China, which is still the world’s largest producer of the fruit. Spain is third in world production, according to information from ICEX, the government agency that promotes Spanish products abroad (see the article about peaches in their Foods & Wines from Spain site. )

Peaches are either “freestone,” meaning the flesh easily pulls away from the pit, or “clingstone,” the flesh tightly adheres to the stone. There are peachy-red varieties, yellow ones and pale, almost white-fleshed types.

While I think of peaches as the zenith of summer fruits, in fact, many are late varieties that don’t mature until the end of September. Such is the famed yellow Calanda peach (Denominación de Origen Melocotón de Calanda) from Aragón in northeastern Spain). While still tiny, the fruit are enclosed in waxed paper bags that protect the peaches from bugs and the elements, allowing them to mature unblemished. They are especially sweet.

The Calanda peaches are marketed fresh and also canned. Famously, they are preserved in red wine syrup.

These peaches are skinned, but not pitted. After poaching in the wine syrup, you can cut them up to serve or serve them whole with fork and knife and let guests slice the peaches at the table.

Submerge the peaches in boiling water for 1 minute. Drain. When cool enough to handle, slip off their skins.

Place skinned peaches in a pan with sugar and enough wine to cover them. Add cinnamon stick and lemon zest. Bring to a boil, then reduce heat and simmer until peaches are tender when pierced with a skewer, about 15 minutes. Remove the peaches with a slotted spoon and place them in a heat-proof jar or bowl.

Raise heat and reduce the wine syrup by half. Pour the syrup over the peaches. Cover the jar or bowl. When cool, place the peaches in the refrigerator.

Serve the peaches, cold, with some of their syrup accompanied by a dollop of Greek yogurt, whipped cream or a scoop of ice cream. 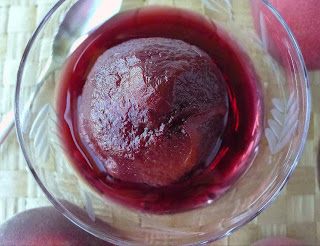