A TASTE OF SEPHARDIC SPAIN

Most Spaniards probably never imagined that some of their favorite home-cooked meals come from the ancient Jewish tradition. The famous cocido, for one; Christmas roscos, for another; Holy Week puddings and festive sponge cake. 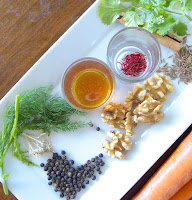 He has adapted the almorí spices to today’s kitchen. The spice rub of saffron, pepper, fennel and caraway is terrific.
The birds are cooked in a covered clay pot. In medieval times, the pot may have set in the hearth. Javier suggests cooking the small chickens in the oven at a very low temperature. Javier suggests using a Moroccan clay tagine. (A slow-cooker or Crock Pot would probably work well.)
Javier’s recipe calls for two picantones, which are very small chickens, weighing each under one pound. The closest equivalent would be Cornish game hens (each about 1 ¼ pounds). I was unable to find the picantones (only during the Christmas season), so I substituted two whole broilers, each weighing just under two pounds—or about twice the size of the picantones. I necessarily had to adjust cooking times. The quantity of stuffing would work for three or four Cornish game hens.
Serves 4.
2 small broilers (1 ¾ pounds each) or 3-4 Cornish game hens
Salt
Freshly ground black pepper
½ teaspoon coarse salt
¼ teaspoon saffron threads
½ teaspoon black peppercorns
¼ teaspoon fennel seeds
¼ teaspoon caraway seeds
Olive oil
1 cup diced carrots
1 cup finely chopped leeks or sweet onions
½ cup fresh breadcrumbs
½ cup black olives, pitted
¼ cup seeded raisins and/or chopped figs
¼ cup chopped prunes
¼ cup chopped dried apricots
3 tablespoons toasted pine nuts
¼ cup toasted almonds, chopped
1 cup diced apple
½ cup chicken broth
1 apple, quartered
Carrots (optional)
2 teaspoons honey
1/8 teaspoon cinnamon
Fresh figs (optional)
Chopped cilantro or parsley
Clean the cavity of the chickens. Wash and dry the chickens, making sure the cavity is clean. Pat them dry inside and out. Sprinkle with salt and pepper and allow the chickens to come to room temperature.
In a mortar crush the coarse salt, saffron, peppercorns, fennel and caraway seeds. Reserve 1/8 teaspoon of the spice mix. Spread the remaining spices on the two chickens.
Heat 2 tablespoons of oil in a skillet. Sauté the diced carrots and onions on moderate heat until the onions are soft, 8 minutes. Stir in the breadcrumbs and remove the skillet from the heat.
In a bowl, combine half of the olives (reserve the rest), the raisins and/or figs, the prunes, apricots, 2 tablespoons of the pine nuts (reserve the remaining pine nuts) and the almonds. Add the sautéed carrot-onions and the reserved 1/8 teaspoon of mixed spices.  Add the diced apple and mix well. 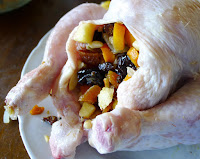 Stuff the cavities of the chickens with the fruit-nut mixture. Use short skewers to close the cavity openings. Tie the legs together with kitchen twine.
Place 1 tablespoon of oil in the bottom of a lidded earthenware pot large enough to hold the two chickens. Place the chickens in the pot and pour the stock around them. Add the reserved olives, quartered apple and carrots, if using. Put the lid on the pot.
Place the pot in a cold oven and set the temperature to 350ºF. When the oven reaches temperature, leave the pot, without opening, for 1 hour.
Remove the pot from the oven and check the chickens for doneness (they should register 155ºF in the thickest part of the thigh). If they are not done, return the pot to the oven. Add additional stock or water if the liquid has cooked away.
When the chickens are done, set the broiler to 450ºF. Remove the lid from the pot or place the chickens in another oven pan so they fit side by side. Dribble a teaspoon of honey over each and sprinkle with cinnamon. Sprinkle the reserved pine nuts on the chickens. Cut figs, if using, in half and place around the chickens. Place the pot under the broiler until the chickens are nicely browned, about 10 minutes.
Allow the chickens to rest 10 minutes before cutting the chickens in halves. Place olives, quartered apple and figs around the chicken on a platter or plates. Garnish with a little chopped cilantro. Skim excess fat from the cooking juices. Pour the juices into a saucepan and reheat. Serve alongside the chickens and their stuffing. 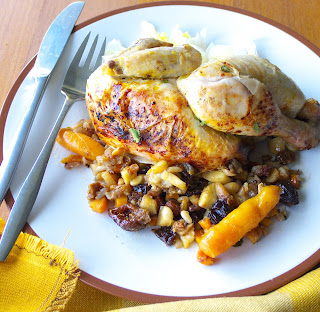 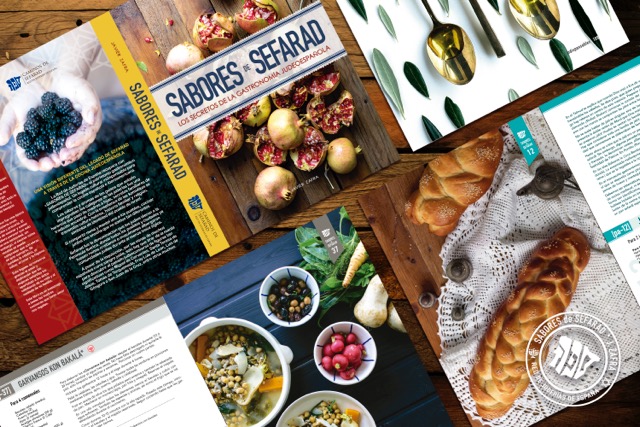