CHICKEN MARBELLA IS NOT FROM MARBELLA

Marbella (the word means “beautiful sea”) is a town not far from where I live on the Costa del Sol, southern Spain. It’s a lovely town with gorgeous beaches on a beautiful sea, the Mediterranean. Marbella is a first-class resort, with fine hotels, beachfront apartments, hillside villas, yacht harbors, a charming Old Town with typical tapa bars and trendy boutiques. (See ravishing photos on the marbella.turismo Facebook page.)

The traditional cooking of Marbella reflects its geography—fishing port, olive groves, irrigated farmland and citrus orchards, upland game reserve. It also has cocina de vanguadia, avant-garde cuisine, such as that presented by two-Michelin-star chef Dani García at his eponymous restaurant at the Puente Romano Beach Resort. Chef Dani makes a cherry gazpacho with cream cheese, anchovies and pistachios that is a tongue-in-cheek take on traditional food and, at the same time, supremely delicious.

But nowhere in Marbella is there anything quite like Chicken Marbella, a recipe that appears in a classic American cookbook, The Silver Palate Cookbook by Julee Rosso and Sheila Lukins ((Workman Publishing; 1979). Because the recipe is so un-Spanish, in spite of its name, I’ve always skipped over it.

But, recently, I read an article in The Tablet (an online daily magazine of Jewish news and culture) proclaiming Chicken Marbella as one of “our favorite recipes for the Passover seder.” (The Passover holiday ends today.) I decided it was time to take another look at that recipe.

The brilliant bit about the recipe is its ease of preparation. It calls for four chickens, meant to feed a crowd. You put the quartered chickens in a marinade, overnight or longer, then put them in roasting pans, add prunes, olives and wine and bake until tender and golden.


The marinade calls for vinegar and oregano. That, indeed, is a typical Spanish adobo, commonly used with fish, pork, or poultry. Then, you add prunes, olives and capers. Spanish cooking occasionally combines meat and poultry with fruit (I have a Moorish-inflected recipe for lamb with prunes) and also with olives (chicken or duck). But, both? Well, I’ll give it a try.

Then, you place the chicken pieces in baking pans, spread brown sugar over them and add white wine. Sugar!

An earlier article in The Tablet included an interview with Julee Rosso, one of the authors of The Silver Palate Cookbook, who said their recipe was inspired by food they encountered while travelling in Spain and Morocco. The “prunes were very much Marrakech tagines; the green olives were Marbella, Spain.” That sounds about right. But, the sugar is pure American! Maybe that’s why it’s such a popular dish. But, not in my kitchen! No sugar, no way.

Here is my interpretation of the classic Chicken Marbella. I made it with one chicken, to serve four. I’ve eliminated the sugar totally. If you like the sweetness, I suggest using sweet wine such as muscatel, PX or sweet Sherry. I used Sherry vinegar instead of red wine vinegar in the marinade and dry Sherry instead of white wine as called for in the original recipe. I loved the sweet jammy baked prunes with the briny olives and capers.

You can use all legs and thighs instead of a whole quartered chicken.

Place the chicken quarters in a non-reactive container (glass or ceramic). In a blender or mini food processor, combine the salt, pepper, oregano, vinegar, oil and brine. Spread half of it over the chicken. Turn the chicken pieces and spread remaining marinade on the chicken. Cover and marinate, refrigerated, at least 12 hours or up to 2 days.

Bake the chicken, uncovered, basting with pan juices every 15 minutes, until chicken is tender and lightly browned on top, about 60 minutes.

Transfer the chicken, prunes and olives to a serving platter. Discard the bay leaves and pour the pan juices over the chicken. Scatter chopped parsley or cilantro on top. 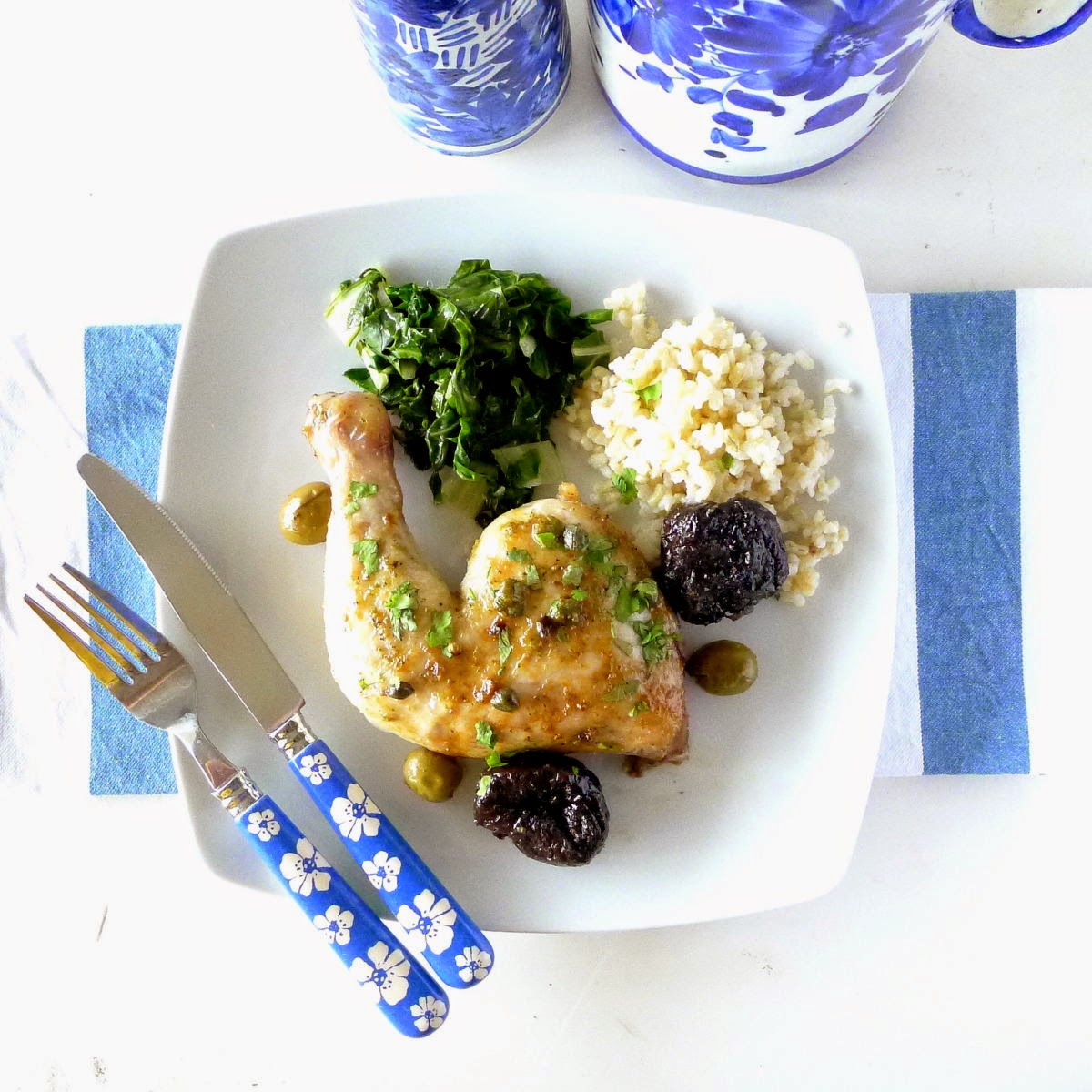