¿Llevas el táper al trabajo? was the headline of a story in my local newspaper. It took me a minute—and a glance at the accompanying photo—to figure out what the article was talking about. The photo showed a pretty chica with a stack of covered plastic containers filled with food.

The article was not asking if you take your tapir to work, but “do you take your lunch to work?" Those covered plastic containers are "tápers." “Táper” is Spanish phonetic spelling for “tupper,” as in Tupperware®. It's the generic name for all plastic storage containers with lids.


While it’s been years since I´ve carried my lunch to work or packed school lunchboxes, I do pack a lunch when I’m travelling. That way I can avoid carb-heavy airport and in-flight meals. I've quite enjoyed meals eaten out of a "tupper" while waiting for boarding.


My favorite packed lunch is usually some variation on a vegetable timbale. Timbale is sort of like a quiche without a crust or a tortilla/frittata that is baked instead of cooked in a skillet.  Cut into small squares, it can be eaten with the fingers (be sure to pack some paper towels!) or, with plastic spoon or fork, directly from the container.

An insulated cold-bag is useful for keeping packed foods safe in transit. However, the timbale keeps a few hours at room temperature and needs no reheating. If you’ve got access to a microwave, warm it slightly.

I used two (10-ounce) bags of fresh spinach leaves for this recipe, making about 10 cups of lightly packed, chopped spinach. If substituting frozen spinach, use about 15 ounces frozen spinach (from two 10-ounce packages). Thaw before adding to the skillet with onions and mushrooms.

I baked the timbale in a rectangular glass oven dish. Alternatively, it can be baked in a round deep-dish pie pan, a cake pan or a loaf pan, although the baking times will vary.

If you’re carbohydrate shy, make this without the bread crumbs. If you want a vegetarian version, omit the diced ham. Add pine nuts or chopped walnuts instead. Substitute dill for parsley for a Turkish inflection. Use a semi-cured (sheeps’ milk) Manchego or any other grated cheese. The Sephardic version of the timbale, called cuajado de espinacas, uses cottage cheese plus Romano. 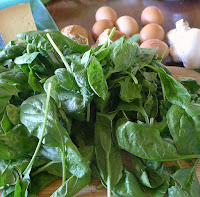 Use 1 tablespoon of the oil to generously grease a rectangular baking dish (11 ½ X 8 inches). Heat the rest in a deep pan. Sauté the onions and garlic until softened, 3 minutes. Add the mushrooms and ham and sauté 4 minutes. Add the chopped spinach. Cover the pan and cook until spinach begins to wilt and reduce in volume. Season with salt, pepper, cloves and nutmeg. Uncover the pan and cook until most of liquid has cooked away. Cool the spinach 15 minutes. Stir in the parsley.

While spinach is cooling, place the breadcrumbs in a mixing bowl and add the milk. Let the bread soften 5 minutes. Mash it with a fork. Beat in the eggs. Stir in the grated cheese.

Combine the spinach and the egg-cheese mixture. Pour into baking dish. Cover with foil. Bake until a skewer inserted in the center of the timbale comes out clean, about 45 minutes. Remove foil and bake the timbale 5-10 minutes longer until lightly browned on top.

The newspaper article about packing a lunch in the "táper" suggests options such as salads of pasta, rice or quinoa, with or without meat or fish; all kinds of vegetable dishes; cold or warm cream soups, and lentils. (“Who says that lentils are only to be eaten hot?”) Here are links to recipes that might work nicely for the lunchbox.