CHEESECAKE FOR A SPECIAL CELEBRATION


I bought butter, a bag of sugar, five packages of cream cheese—all ingredients that rarely appear in my kitchen. These radical ingredients were to make an old-fashioned cheesecake for the 88th birthday celebration of my good friend, artist Charlotte Gordon. This was cheesecake “by the book,” with no substitutions such as I usually make—olive oil for butter, stevia or other artificial sweetener in place of sugar.


Of course I used ™Philadelphia cream cheese for the recipe, as Charlotte is originally from Philadelphia. Though her love of cheesecake probably flows from years working in New York City, where she was art director of Seventeen magazine in the 1950s. I met Charlotte when she and her husband, Harry, a designer, came to live permanently in Mijas, Spain, in 1973.  Together, we´ve cooked and shared meals ever since. Charlotte continues to make sculpture, collage and photography here.

In Spain, where graham crackers are not available, I used crushed galletas María. These are plain, not-too-sweet cookies. Vanilla wafers would be a suitable substitute as well. They are quickly ground in a food processor. Most recipes for graham-cracker crust call for additional sugar, but I did not use it. Butter can be melted in the microwave.

For this cheesecake, the crumb crust is chilled before being filled and baked. If using it for a no-bake, gelatin cheesecake, pre-bake the crust in a 400ºF oven for 6 minutes.

Makes enough to line a 9-in/ 24-cm springform pan.

Place crumbs and sugar, if using, in a bowl. Add butter and mix well. Lightly butter a 9-inch springform pan. Press the crumbs evenly into the bottom and part way up the sides of the pan.

Chill the pan at least one hour before filling and baking.

In Spain, packages of cream cheese are 250 grams, or slightly more than the 8-ounce packages called for in the recipe. I weighed out 40 ounces, but I expect the slight extra quantity wouldn’t affect the recipe’s results. Be sure to remove cream cheese from the refrigerator at least one hour before starting the recipe so it has time to soften.

Place a sheet pan or foil beneath the pan in the oven in case there is any leakage from the springform pan.

In a small bowl combine the sugar, flour, salt and lemon zest. Set aside

In a mixing bowl, beat the cream cheese until fluffy. Add the lemon juice. Beat in eggs, one at a time. Add the vanilla. Gradually beat in the sugar mixture, then the heavy cream.

Preheat oven to 450ºF. Remove pan with crumb crust from refrigerator. Carefully pour the cheesecake batter into the pan.

Bake 10 minutes. Reduce oven temperature to 250ºF. Bake 60 minutes more. Cake will have pulled away from the sides of the pan but will still be soft and jiggly in the center. Turn off the oven and open the oven door. Leave the cake in the oven another hour. Remove and set the pan on a wire rack to cool completely.


Refrigerate the cheesecake in the pan until well-chilled. Use a knife to loosen cake from sides of pan, then release spring and remove the ring. Slide cake onto a serving plate. Spread the top with sour cream, if using. Serve immediately or return to refrigerator to chill the topping. 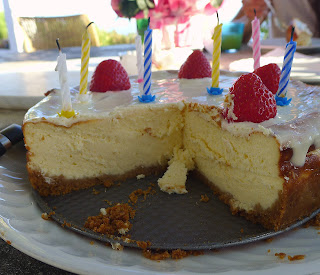