THE SPICE THAT’S CUMIN IN


“Pass the salt and pepper, please” said one of my tablemates at our first meal in Morocco. I passed him two small ramekins, one a salt cellar and the other, presumably, containing pepper.


“Not pepper!” he exclaimed. “What is it? Sort of like curry.” I tasted. Cumin, comino, in Spanish. After salt, cumin is the most prevalent seasoning in Moroccan food. It’s added to many dishes during cooking and it’s placed on the table for each person to add according to taste.


Cumin is the whole or ground seeds of a plant belonging to the same family as parsley, dill and caraway. Its aroma is pungent, nutty. Its taste, slightly bitter, warm and earthy. A native of south Asia and the Middle East, the spice has found its way into cuisines right around the world, especially in spice blends such as Moroccan ras el hanout; Indian garum masala and curry; Tex-Mex chili powder, and Latin American adobo. It’s often a cohort of hot chile.

I’m always exploring connections between cooking styles and cultures. So, of course I noted that cumin is a spice also used in Andalusia, the region of Spain just across the Mediterranean from Morocco. (So close that, on a clear day, I can see the mountains of North Africa from my kitchen window.)

For instance, the tapa bar favorite, pinchitos, spicy mini-kebabs, is spiced almost identically to the brochettes grilled by street vendors in Morocco, heavy on the cumin, with a little heat from chile. In Málaga and Cádiz, pinchitos are usually made with pork, while in Tangier, just across the narrow Straits of Gibraltar, they are made with lamb or beef.

Cumin even turns up in some versions of gazpacho. It’s used in that favorite Sevilla dish, espinacas con garbanzos, spinach with chickpeas, as well as with lentils and black-eyed peas. Surprisingly, a hint of cumin appears in Andalusian braised vegetables, such as asparagus, artichokes, fava beans and pumpkin.

The Andalusia-North Africa connection is more than just proximity. The “Moors” who ruled Al-Andaluz for seven centuries were Arabs and Berbers from North Africa. They left an indelible mark on the cuisine, customs and language of southern Spain. (Spanish words such as almendras, almonds; albóndigas, meatballs, and aceite, oil, all derive from Arabic.)

I’ve been cooking a lot of Moroccan food since I returned from a week’s travels there (see the previous four blog posts for recipes). But this week I’m looking for cumin connections in Andalusian food. This is a village recipe—calabaza guisada, or stewed pumpkin—that reminds me a little of tagine, the Moroccan stew of vegetables and meat.


The Spanish recipe calls for pumpkin, peppers, onion and tomatoes to be layered in a pan and simmered or baked until tender. I’ve turned the dish into a vegetarian main course, by baking all the veggies on top of a layer of brown rice. I’ve used butternut squash from the garden instead of the more traditional pumpkin. 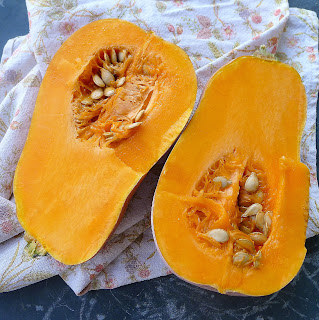 Cook the rice in 6 cups of boiling water with 1 teaspoon salt for 8 minutes. Drain. (Rice can be par-boiled in advance of assembling the casserole.)

Cut the squash in half, remove seeds and peel. Slice it crosswise ½ inch thick. Spread the drained rice in the bottom of a lightly oiled cazuela or oven casserole. Layer the sliced squash, tomatoes, onion, green peppers and garlic on top of the rice. Break the bay leaf into pieces and tuck them among the vegetables. Sprinkle with parsley, cumin, salt to taste and pepper. Drizzle over the vinegar and oil. Pour over the boiling water.

Cover the casserole with a lid or foil and bake until squash is tender, about 75 minutes.

Serve hot or room temperature with a dollop of yogurt, if desired. 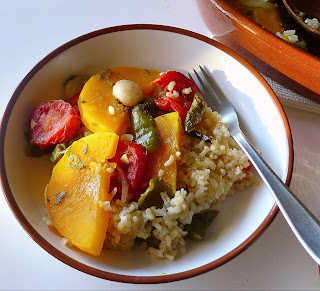