The late rays of sun turn the dunes golden orange. We are trekking by dromedary through the Erg Chebbi desert (southeastern Morocco), heading towards a camp of jaimas, for dinner, a night under stars and dawn on the Great Dune. As the sun descends, shadows grow long. The day’s radiant heat abates.

The caravansary is a group of tents enclosing an open area with low tables and carpets spread on the sand. A few trees ring the enclosure that is tucked in the folds of a sea of dunes. The camels are parked outside for the night.

In a rustic kitchen, our dinner is bubbling away. Dinner is tagine. Tagine is the word for both the finished dish, a stew of meat and vegetables, as well as the cooking vessel, which is an earthenware or metal pot with a shallow base and conical lid.


In a week travelling in Morocco, I ate tagine every single day. There was beef with prunes (twice); kefta meatballs with eggs (twice); chicken with carrots, eggplant and potatoes, and chicken with preserved lemon and olives.

Tagine has long been one of my favorite dishes to cook for family and for guests. I love the simplicity of its preparation—ingredients are layered in the tagine with spices and a little liquid is added. Grated onions in the bottom provide flavor and substance. On top, pieces of meat or chicken and vegetables simmer slowly beneath that conical lid. The lid traps steam and keeps it circulating, resulting in tender food, full of flavor. There’s no browning, no stirring.

However, since I converted last year to an induction cooktop (requiring only steel pans), I haven’t prepared tagine at all. I decided that, instead of getting rid of the clay tagine, I would try it in the oven!

Kefta are very small (1 inch) meatballs, well-seasoned with spices and simmered in a spicy tomato sauce. Ground lamb is best, but beef or chicken can be used instead. Neither bread nor egg is added to the meat, so the kefta are quite dense. (The seasoned meat can also be pressed onto skewers and grilled as kebabs.)

A clay tagine is heavy. Take care in lifting it in and out of the oven. Remove lid first, taking care not to release steam towards your face. Then lift out the bottom. Place each on an insulated board, never on a cold surface.

If you don’t have an earthenware or ceramic tagine, use an oven-safe lidded pan or shallow lidded casserole.

Use a food processor to finely chop together the onion (2 or 3, depending on size) and garlic. Use it for both the meatballs and the sauce. Spices, too, are divided between meatballs and sauce.

How to serve tagine. In a  Moroccan home, the tagine is served on a low table. Family members sit around the table and eat right out of the tagine, using fingers and bread to help themselves to the delicious nuggets of meat and vegetables. As part of a meal, the tagine might be served with soup or a selection of salads or an additional meat or chicken dish. It is not customary to serve rice or cous cous as a side with tagine. However, if tagine is the main dish, you may want to accompany it with more than just bread.

Shape the meat mixture into small (1-inch) balls. Place them on a sheet pan and refrigerate until ready to cook the tagine.

Drizzle the spice-oil mixture over the tomatoes. Place sprigs of parsley and cilantro in the center and chile, if using, on top. Cover the tagine or casserole.

Very carefully, lift off the tagine lid. Remove the tagine from the oven to check if it needs additional liquid. Do not stir it. Return the tagine to the oven. Replace the lid.

Cook 45 minutes more. Remove carefully, as before. Tomatoes should be thickened and eggplant very soft. Use a spoon to make indentations in the surface. Break an egg into each. Return the tagine to the oven and replace the lid. Cook until whites are set, but yolks still liquid, 8 to 10 minutes.

Remove the tagine from the oven. Eggs will continue to cook from residual heat. Serve the kefta from the tagine, removing the lid when the tagine is placed on the table. Accompany with bread. 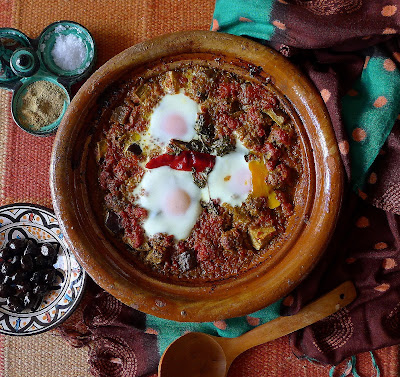 Another recipe for tagine: Chicken Tagine with Olives and Lemon.
Salads to accompany a tagine meal: https://mykitcheninspain.blogspot.com.es/2017/10/morocco-salad-tour.html
Moroccan Bread.

More about clay-pot cooking in the oven: Baked Rice and Seafood Cazuela.