We promised Lucas, my 10-year-old grandson, who loves shellfish, that we'd go for a crawfish feast while visiting near New Orleans. But, at Crabby Shack in Madisonville, LA, near the Tchefuncte River, we found out that the season for crawfish was over (March to mid-June). So we had to settle for big Gulf shrimp.  ﻿

Some other dishes from dinner at Crabby Shack. 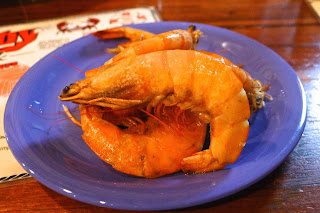 We're going back to Crabby Shack in a few days. Shall I try the frogs legs? Then, back to my kitchen in Spain! I'll be packing some Crab Boil spices so I can cook Spanish shrimp in New Orleans style.
Posted by JANET MENDEL at 12:59 AM