EAT SARDINES, SAVE THE PLANET! 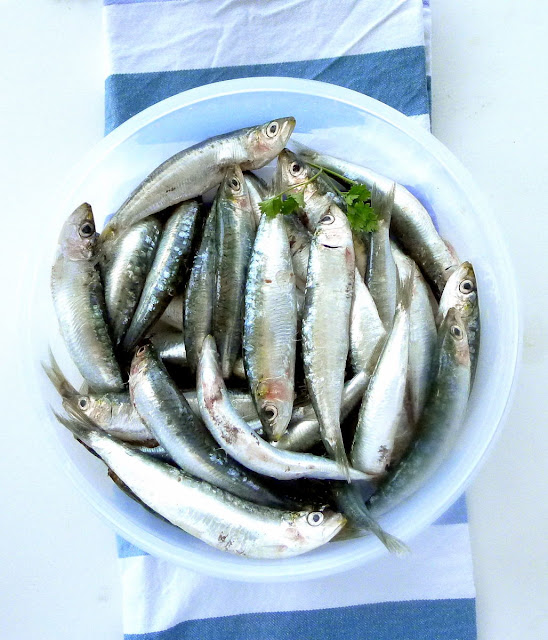 Some of the top chefs in the world are going to be serving up sardines, anchovies and other small fish on World Oceans Day, June 8. The list of chefs who have signed the pledge includes Joan Roca whose restaurant, El Celler de Can Roca, Girona, Spain, this week was cited as the BEST restaurant in the world. Amongst the chefs participating in Sardine Day—I mean World Oceans Day—are Massimo Bottura of Osteria Francescana, Modena, Italy, number two, and René Redzepi of Noma in Copenhagen, Denmark, in the number three spot.

Sardines at a 3-star restaurant? According to the folks at Oceana, http://oceana.org,  an advocacy organization dedicated to protecting the world’s oceans, the Chefs will help inspire and empower consumers to get involved in supporting Oceana’s campaigns to help restore the world’s oceans to levels of biodiversity and abundance that can survive and support the planet. This commitment is the result of a gathering of the world’s leading chefs in support of ocean conservation that took place earlier this year at the Basque Culinary Center in San Sebastian.

The small fish the Chefs pledged to serve – species like anchovies, sardines, mackerel and herrings - are known as “forage” fish because they play a crucial role in some of the most productive marine ecosystems in the world.

However, much forage fish is captured to make fish meal to feed farmed salmon, chickens, pigs. According to Oceana, we can feed tens of millions more people if we simply eat sardines and other forage fish directly rather than in form of farmed salmon or other animals raised on fish meal and fish oil. Eating more forage fish—along with scientific management of the world’s fisheries—will enable us to ultimately feed more people from the oceans and to be less reliant on getting our animal protein from livestock.

I’m looking forward to hearing how Chef Joan Roca cooks sardines! Meanwhile, I can do my small bit! It’s a good cause and, besides, June is sardine season. Another plus--sardines are loaded with heart-healthy Omega-3 fatty acids.

My favorite way to eat fresh sardines is espetones, sardines skewed and roasted on a wood fire at the beach. Here is another tasty way with these delicious small fish. If fresh sardines are not available, use fillets of mackerel or herring.

For this recipe, the sardines can be filleted or not, as you please. Unlike boquerones, fresh anchovies, the bones of sardines don’t easily pull away from the flesh. You have to lift the spine with knife tip or thumb, then “unzip” it by pulling between thumb and forefinger. If you decide not to fillet them, tell diners to eat them with their fingers, rather than knife and fork. Once cooked, it’s ever so easy to separate the bones.

To clean the sardines, spread a thick layer of newspapers on the work surface. Slide the scales off onto the paper. Remove heads and innards. Rinse the sardines in ice water and pat dry on paper towels.

Wash the sardines and place them in a single layer in an oven pan or cazuela.

Place the clams, if using, around the sardines. Break the bay leaf into pieces and tuck them in among the sardines. Sprinkle with salt.

In a small bowl combine the garlic, parsley, pine nuts and bread crumbs. Spread this mixture over the sardines. Dribble the oil over them. Pour the wine into the bottom of the pan.

Bake until the sardines are done, about 14 minutes. 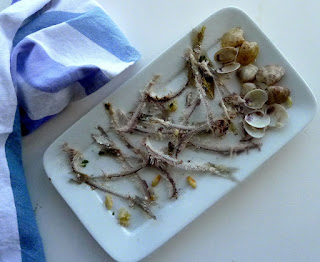