IBÉRICO ON THE HOOF

Check out my article in the Los Angeles Times HERE about the coming of Jabugo ibérico hams to America. If the first wave of ibérico was called the “best ham in the world,” this may be even better than the best! 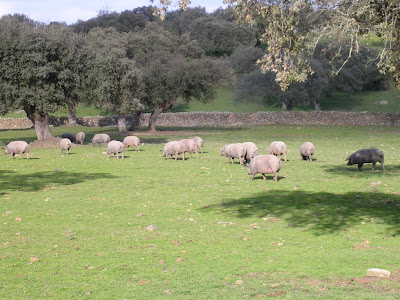 I’ve been to see those famous hams on the hoof, in Jabugo (Andalusia) and in Extremadura. These are free-range pigs of the ibérico breed that are fattened on acorns (bellotas) from wild holm and cork oak trees that grow in the dehesa, a unique ecosystem in western Spain. 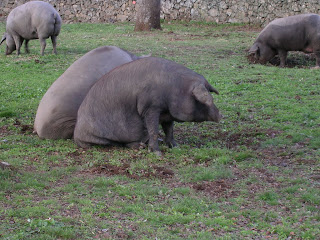 Even before my visit to the pig habitat, I got my first intimation of what makes such superlative ham at dinner when I sampled fresh ibérico pork, the raw material for ham.

Cuts with names like secreto, “secret;” pluma, “feather,” and presa “prize” as well as solomillo, tenderloin, were grilled over smoldering oak coals. The meat was served medium-rare. We’re talking about fresh pork. Like prime beef, it was marbled with veins of fat. I tasted. Wow. This was absolutely the best pork I had ever eaten. The tender cuts very nearly melted in the mouth. The cuts from the shoulder, just chewy enough, were incredibly juicy. This is not “the other white meat.”

Wait! Before you start picturing clogged arteries, let me tell you about acorn-finished ibérico pork. The acorns are rich in oleic acid, the same found in olive oil. Because the pig does not convert the fat, the oleic component predominates and the meat is high in monounsaturated fat. That’s why acorn-fattened ibérico pigs are sometimes called an “olive tree on four legs.”

But, mainly it’s about deliciousness. This is delicious meat. It makes delicious ham.

While reporting for the LA Times story, I learned that fresh ibérico pork is now being exported from Spain to the US. It was José Andrés (http://www.thinkfoodgroup.com/) , chef/owner of eight restaurants across the country, including The Bazaar in Beverly Hills, with two more opening in Las Vegas later this year, who was instrumental in getting the first ibérico hams to America. José is a business partner of Fermin, the only Spanish company to meet U.S. regulations for meat slaughtering. The fresh ibérico pork now available also comes from Fermin. Look for it at Wagshal’s Market in Washington, D.C. (http://www.ibericousa.com/  ) and from La Tienda (http://www.tienda.com/new/index.html.) 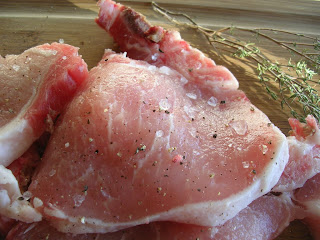 In Spain, I can buy fresh ibérico pork at local markets. Not that I buy it very often, as it’s quite pricey. I paid about $7.15 for six very thin loin chops (13 ounces), serving two persons. Cooked on a hot plancha, about one minute per side, they were delicious.

This is a photo of revuelto, eggs scrambled with mushrooms and ham. The recipe is on this page of the Los Angeles Times on Oct. 7. 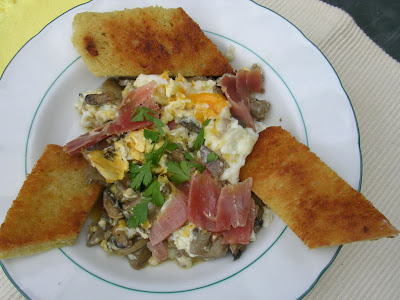