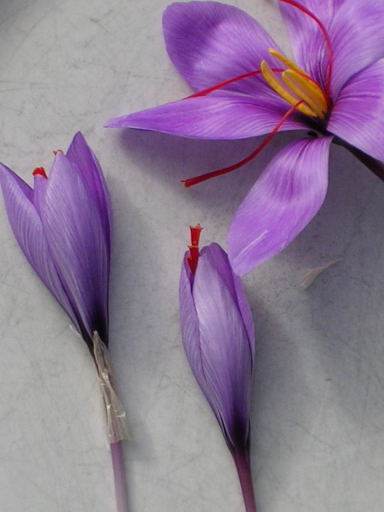 The flower is a type of crocus-- crocus sativus. These crocuses appear, not in the spring, but just in time for Halloween. 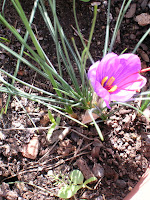 Saffron, the spice, consists of the dried stigmas of the small, mauve-colored, autumn-blooming crocus. The plant originated in the Middle East and was introduced into Spain by the Moors in the ninth century. Saffron became the flavor of status in medieval cuisine. It has been grown in Spain’s central La Mancha region ever since.

While I was collecting recipes and stories for my book, COOKING FROM THE HEART OF SPAIN, I visited La Mancha during the saffron harvest and followed the trail of this sensuous spice all the way from the field to the kitchen.

(I visited Bealar in Campillo de Altobuey (Cuenca), a small family-owned business established in 1959. It is the largest producer of saffron with the certification (denominación de origen) Azafrán de La Mancha.)

A field of saffron looks like nothing—clumps of muddy clay soil, stones, a few weeds—until you look closer and see the tiny flowers popping up from bare earth. Picking begins from the time the first few saffron flowers begin poking up through the dirt and continues daily. Depending on rain and temperature, this is anywhere from Oct. 25 to Nov. 5.

The saffron flowers must be hand-picked early in the morning, before the petals open. Once warmed by the sun, the flowers open and become limp, making it harder to remove the stigmas.

Crates filled with saffron crocuses are delivered to the mondaderas, the women who extract the three threads of the stigma from each crocus. The stigmas must be removed the same day that the flowers are picked or the flowers become pulpy and the precious stigmas are lost. 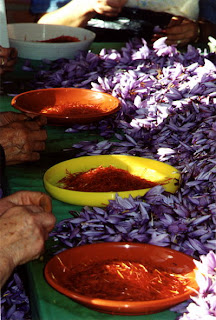 Deftly, the women open the petals of the crocus with the fingers of one hand and with the other, pull out the three stigmas. The purple flowers are discarded in a heap on the floor. The wisps of deep red saffron stigmas slowly accumulate on plates. Each woman will be paid by the weight of saffron she has prepared.

Once the saffron filaments are separated from the flowers they must be lightly toasted to reduce their humidity and to preserve their color and olfactory properties. The saffron is spread in sieves to dry over electric heating elements or, in the old way, over a brazier.

Traditionally, saffron production was a small, family enterprise, with each family planting no more than what its members could pick and process in a day—early morning in the fields, afternoon at the mondeo, the night tending the braziers for the drying operation.

Saffron thrives in only a few scattered areas in the provinces of Toledo, Cuenca, Albacete, and Ciudad Real. Saffron grown in this region that meets quality specifications can be certified with the Denomination of Origin Saffron of La Mancha (Azafrán de la Mancha). DO certification promotes product quality and helps to sustain the deeply rooted customs and foodways of small growers in La Mancha.

When cooking with saffron, crush the threads in a mortar (or, use the butt-end of a knife to crush it in a teacup) and add hot water or other liquid. Let the saffron infuse for at least 15 minutes before incorporating it into a sauce or rice.

Here is a saffron recipe from my book COOKING FROM THE HEART OF SPAIN—FOOD OF LA MANCHA.

Saffron lends a golden color and an aromatic, subtly bitter flavor to the rich ice cream. Saffron has a real affinity for chocolate, while the pine nuts provide a crunchy contrast to the smooth cream. Altogether a delightful combination. Ice cream, praline, and syrup can all be made several days in advance of serving. 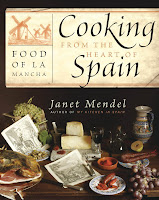 Bring the milk and orange zest to a boil. Pour the milk through a sieve into a heatproof bowl and discard the orange peel. Add the crushed saffron to the milk and allow to infuse 20 minutes.

Beat the egg yolks, salt, and sugar in a bowl. Lift off the skin from the top of the milk and beat the warm milk into the yolks. Transfer to the top of a double boiler and cook the custard mixture over hot water until foamy and thick enough to coat a spoon. Remove from heat and allow to cool.

Whip the cream until it holds soft peaks. Fold it thoroughly into the custard mixture and chill.

Freeze the mixture in an ice cream maker.

To prepare the praline, place 3 tablespoons of sugar and 2 tablespoons of water in a heavy skillet or round-bottomed wok. On high heat dissolve the sugar, stirring.

When sugar is bubbling, stir in the pine nuts. Cook, stirring, until sugar begins to caramelize and adhere to the kernels. Add 2 tablespoons more sugar, and stir until it melts and turns golden. Add remaining sugar and continue stirring and cooking until pine nuts are coated in caramel.

Spread the mixture out onto an oiled plate or a sheet of baking parchment. Allow to cool. When completely cool, break the praline up into small bits. Store in a covered container for up to 1 week.

To prepare the chocolate syrup, melt the chocolate in the top of a double boiler over hot water. Stir until smooth. Stir in the oil, then the boiling water, then the sugar.

Place the saucepan over direct heat and cook, stirring, until it begins to bubble. Cook without stirring for 3 minutes. Remove and cool.

Makes ¾ cup syrup. Keeps refrigerated for up to 1 week. Can be reheated in a microwave to bring to pouring consistency.

To serve: Allow the ice cream to soften 20 to 30 minutes. Scoop ice cream into small bowls. Dribble with chocolate syrup and scatter praline on top.