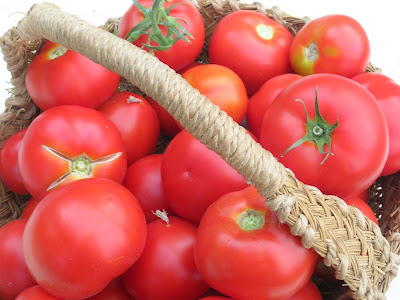 The first really ripe tomatoes in my garden appeared only a week ago. I sliced them, drizzled them with fine olive oil and ate them with pleasure. Now, they are coming fast and furious. Of course, I’m making gazpacho (see my favorite gazpacho recipe here). I also have a weakness for BLTs, made with toasted whole-grain bread, homemade olive oil mayonnaise, crisp bacon, lettuce, sliced sweet onions and thick slices of just-picked, sun-warmed tomatoes.

Later in the season, when the tomato wave threatens to inundate me, I’ll start packing tomatoes into freezer bags. But, now I’m looking for ways to use my daily harvest of ripe tomatoes. Finally, I’m ready to turn them into sauce.


One of my favorite tapa bar dishes is magro con tomate, chunks of pork braised in fresh tomato sauce. Without embellishments, it satisfies the “five ingredients or less” rule—pork, olive oil, tomatoes, garlic, salt.  Nevertheless, I like to add fresh herbs to change the basic recipe—thyme, fennel, rosemary, oregano or basil.

Magro means “lean,” to distinguish the meat from fatty cuts such as panceta. In fact, the dish is best made with a slightly fatty cut from the shoulder. Cut the meat into 1-inch cubes. 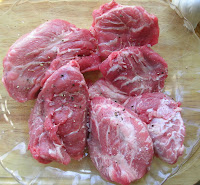 In this version, I substituted pork cheeks (pictured at right), dollops of flesh that, slowly cooked, become wonderfully tender. You can turn this into a sandwich by spooning the pork and sauce onto a split roll or into a main course by serving it with rice, pasta or potatoes.

1 pound pork cheeks ¼ cup olive oil 2 cloves garlic, chopped2 pounds tomatoes (about 8), peeled, seeded and chopped1 teaspoon salt1 bay leafPinch of cumin seed Pinch of oreganoPinch of cayenne
Heat the oil in a deep frying pan and brown the pork cheeks on a moderately high heat. Add the garlic, then the tomatoes. Turn up the heat. Add the salt, bay leaf, cumin, oregano and cayenne. When tomatoes are bubbling, cover the pan and simmer 45 minutes. Remove cover and continue cooking, stirring frequently, until meat is fork-tender and tomatoes are almost syrupy, about 45 minutes. Stir constantly during the last few minutes, so the sauce doesn’t scorch. Serve hot. 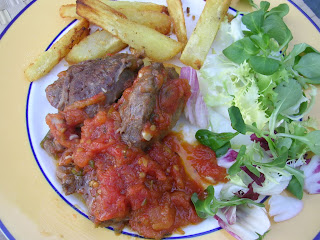