The oracle has spoken. A German octopus named Paul gained fame by predicting that Spain would win the soccer World Cup last Sunday, and, so, it has come to pass.  (Paul's picture here).

In spite of the respect for a cephalopod so savant, so sporting, consumption of octopus tapas in Spain has skyrocketed in the past week or two. Especially in Galicia (northwestern Spain), where it is a favorite in tapa bars and at summer village festivals.

Luckily for me, as I hadn’t come up with another connection between food and football. To celebrate the victory, here’s a typical Galician recipe for preparing octopus and a Mediterranean one for a chopped salad. 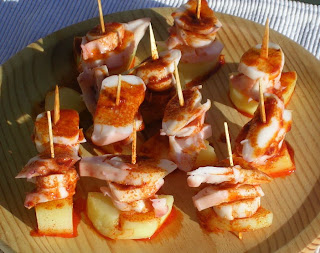 Blanch the thawed octopus in boiling water for 1 minute. Drain. Bring another pot of water to a boil with the slice of onion and the bay leaves. Add the octopus and let it cook at a simmer for about 1 hour. It should be tender, just a little chewy.

Remove and let it cool slightly.

Cut the potatoes in half and add them to the same water in which the octopus cooked and cook them until tender.

When the octopus is cool enough to handle, slide off the pinkish skin and discard, if desired. This is optional; many prefer to leave the skin. With scissors, cut the octopus into bite-size pieces. Arrange them on wooden plates with the potatoes. Sprinkle with salt, pimentón, garlic and drizzle with the oil.

Once you’ve cooked your octopus, you can serve it in quite a few guises. This salad, sometimes called salpicón, can also be made with shrimp or other shellfish. 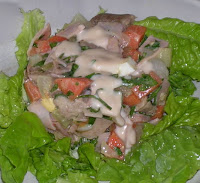 Cook the octopus as in the preceding recipe. Use scissors to dice it. Combine in a bowl with the tomatoes, pepper, onion, garlic, parsley, salt, oil and lemon juice. Stir to combine.

The salad can be prepared in advance, omitting the tomatoes, and refrigerated until serving time. Add the diced tomatoes at the last minute, as refrigeration dulls the taste of fresh tomatoes.
Posted by JANET MENDEL at 1:34 PM