CONJURING FROM THE CUPBOARD (2)


Last week, after a shopping trip to the Coast, I regaled myself with fresh seafood—calamares for squid sandwiches, a pair of dorada (gilt-head bream) for roasting and gambas, head-on, never-been-frozen,  shrimp. This week, it’s back to frozen fish—a packet of cod fillets.


I imagine most of you, living with restrictions on shopping, are making omissions and substitutions in favorite recipes. Me too. My plan is to use the frozen cod in place of dry salt cod in a traditional recipe for bacalao a la Bilbaina, cod as prepared in Bilbao (Basque Country). Instead of roasted bell peppers, I’m subbing canned piquillo peppers.


Piquillos are one of my pantry staples. These small, fire-roasted peppers add a bittersweet piquancy to any dish.

Use any white fish fillets, fresh or frozen and thawed, for this quick and easy preparation. If you don’t have piquillos, use ordinary canned pimientos or fresh bell peppers, roasted and peeled.


Slice or tear the peppers into strips. Chop one clove of garlic. Heat 1 tablespoon of the oil in a small skillet and sauté the pepper strips on medium heat, stirring, until they begin to brown, 5 minutes. Season them with salt and stir in the vinegar. Remove the peppers and keep them warm. 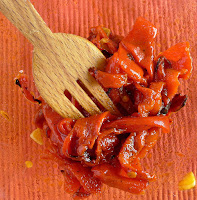 Heat remaining 3 tablespoons of oil in a cazuela or skillet. Slice the remaining 4 cloves of garlic and add to the oil with the chile. Fry until garlic just begins to turn golden. Skim out the garlic and chile and reserve.

Remove the cazuela from the heat and stir in the flour.
Place the pieces of cod, skin side down, in the cazuela in one layer. Return it to the heat for 2 minutes, shaking the cazuela to mix the flour and oil with the cod.

Place the fish on heated plates. Divide the peppers between the cod fillets, heaping them on top. Scatter the reserved bits of garlic and chile over the peppers. Spoon the oil remaining in the pan over the fish and peppers. Garnish with sprigs of parsley. 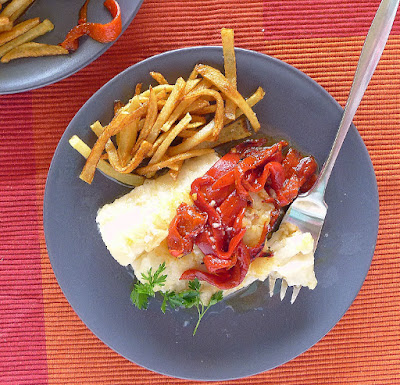 Another recipe for frozen cod:
Batter-Fried Cod with Piquillo Alioli.

Lockdown update: In Spain's gradual de-escalation from strict stay-at-home rules, Málaga province, where I live, on Monday will begin Fase 1 (an advance from phase 0!), allowing gatherings of up to 10 people and the opening of shops (not dine-in restaurants). Some Madrileños are banging on pots and pans to protest being stuck in Phase 0. Mercifully, the number of new cases and fatalities across the country continues to fall.