BRING BACK AN OLD FAVORITE

When I prepared a new edition of my first-ever cookbook, COOKING IN SPAIN (1987; 2006), I edited it down from more than 400 recipes to fewer than 300. The reason was to allow space for a fresh format and a more cook-friendly display of recipes.

What was my criteria for cutting recipes? I thought about which dishes were still part of Spanish cooking. And, I considered whether my audience (English-speaking home cooks who wish to explore Spanish cuisine) would likely use the recipes. For instance, did I really need to include three different recipes for cooking tongue? Probably not, so I deleted two.

One of the recipes that didn’t make the cut was “Brazo de Gitano de Patatas,” or “’Gypsy’s Arm’ Potato Roll,” a roulade of mashed potatoes with meat filling. It just seemed really old-fashioned.

Then a couple weeks ago my favorite TV chef, Enrique Sánchez on Canal Sur Andalucía, prepared a cold version of brazo de gitano, with a filling of tuna and vegetables. (See that show here.) I was reminded of what a good dish it is, never mind how old fashioned. So, I pulled out my first edition of COOKING IN SPAIN. Here’s that recipe, resurrected.

I still can’t say why it’s called “gypsy’s arm,” a name that’s also used for a sweet cake roulade, except that the roll sort of looks like an arm.

Use mature baking potatoes (such as russets) for this recipe. You can use pimiento-stuffed olives instead of olives plus chopped piquillo peppers. I used the rest of the can of piquillo peppers to make an easy sauce to serve with the roulade (that recipe is here.) Serve the roulade hot, room temperature or cold. It serves 4 as a main course or 6 to 8 as a starter or as part of a buffet meal.

Cook the unpeeled potatoes in water to cover with 1 teaspoon salt until they are tender when tested with a skewer, 15 to 20 minutes. Drain and cool the potatoes.

Heat the oil in a skillet and brown the ground pork, breaking it up as it cooks. Add the cumin, onion, green pepper and garlic and continue frying until onion is softened, 5 minutes. Add the chopped tomatoes, 1 teaspoon salt and black pepper. Cook, uncovered, stirring frequently, until tomatoes are thickened and all of the liquid has cooked off, about 15 minutes.

Peel the potatoes and either mash them or put them through a ricer. Season with 1 teaspoon salt and a grind of pepper. Stir in the egg yolk. Fold the chopped parsley, olives and piquillo pepper into the mashed potatoes.

Line a baking sheet with oven parchment. Spread the potato mash on the sheet into a ½-inch thick rectangle, approximately 12 inches X 9 inches.

Spread the pork and tomato filling on top of the potatoes. Starting from the long side of the rectangle, use the parchment paper to roll the potato slab over the filling, just as you would roll up a jelly-roll cake.  Brush the roll with beaten egg and sprinkle with pimentón. (Use smoked pimentón, if desired.) 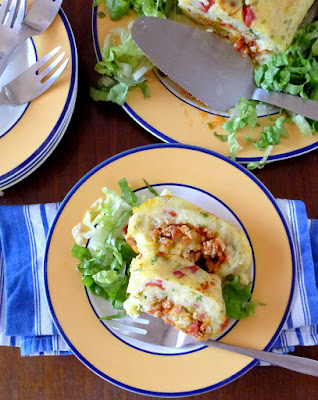 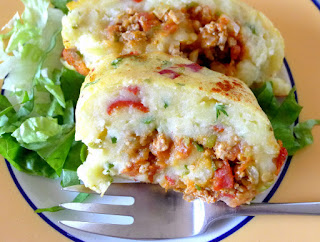