Semana Santa (Holy Week) won’t be the same in Spain this year, without the solemn religious processions wending their way through the streets and the tapa bars thronged with people, both devout and not, seeking refreshment while the drum beat and mournful trumpets resound. It’s all cancelled due to the coronavirus crisis.


My own observance of Holy Week is also constrained. Every year I try out a different recipe for bacalao, dry salt cod, the most emblematic food during Lent and especially for Viernes Santo, Good Friday. I didn’t have the foresight to buy the cod several weeks ago, before lockdown (it keeps long periods without refrigeration). But I do have in the freezer a package of fresh-frozen cod fillets.

Soldaditos de Pavía means “little soldiers of Pavía.” The “soldiers” are strips of batter-fried cod. The saffron in the batter turns the fritters yellow and they’re usually wrapped in a strips of red pimiento, so they are named, depending on which story you prefer, either for the color of the uniforms worn by the Spanish Hussars who occupied the Italian city of Pavia in a famous battle of 1525, won by Emperor Charles V, or else for the troops of General Pavía, who wore red waistcoasts when in 1874 they stormed Parliament and forced its dissolution at bayonet point, marking the beginning of the end of Spain’s first republic.

I’ve got canned piquillo peppers, a pantry must-have. Instead of topping the fried fish with bands of the red peppers, I made a piquant sauce with them.

If you want to know how to prepare real salt cod, see this blog post.  At the end of that post are links to many recipes using bacalao. 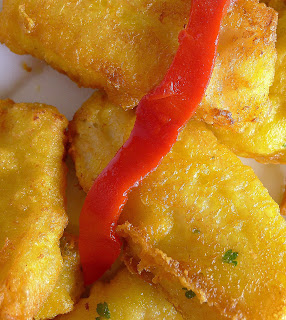 If you are using dry salt cod, de-salt it by soaking in water for up to 3 days, changing the water several times a day. If using fresh fish, salt it lightly and allow it to stand for 30 minutes. Do not salt thawed frozen fish. Hake can be substituted for cod.

Can’t find yeast? Try the recipe for beer-battered fish instead. See the link to the recipe below.

Place the yeast in a small bowl and the saffron in another small bowl. Add 2 tablespoons hot water to each. Let stand 5 minutes.

Place the flour in a bowl and combine with the salt. Make a well in the center of the flour and stir in the oil, yeast and saffron. Stir in enough additional hot water (6 to 8 tablespoons) to make a smooth batter about the consistency of thick cream.

Cover the bowl with a dampened cloth and let the batter stand for 1 hour. Stir in the parsley and garlic.

Cut the cod into strips of approximately 4 X 1 ½ inches. Pat the fish dry with paper towels.
Place oil in a deep skillet to a depth of 1 inch. Heat until the oil is shimmering, but not smoking (about 355ºF).

Dredge the strips of cod in the batter, letting excess drip off. Carefully place cod in the hot oil, without crowding the pan. Fry the pieces of cod, turning them once, until golden on all sides, 3 to 4 minutes. Remove with a skimmer and drain on paper towels.

The piquillo variety of pepper is bittersweet and mildly piquant. If desired, add a little hot pimentón (paprika), cayenne or Tabasco to the sauce to give it more punch.

Finely chop the garlic in a food processor. Add the mayonnaise and process until it is smooth. Add the oil, piquillo peppers, salt and pimentón, if using. Blend until smooth.

Posted by JANET MENDEL at 6:36 PM No comments:

THE CUPBOARD IS ALMOST BARE


By the end of the second week of lockdown, it’s definitely time for another run on the supermercado! The cupboard is almost bare. We’re down to bare bones. But, I’m not scraping the bottom of the barrel. In a reverse operation, I’m using my stash of foods kept just for special occasions. This is certainly a "special occasion," if not the sort I originally had in mind.

I’ve defrosted a bag of plump sea scallops, a shellfish I adore. I used to buy them fresh, but they seem to have disappeared from local markets. I occasionally splurge on frozen ones.

I’ve also discovered in the freezer two small containers of shrimp broth (made from the heads and tails of fresh shrimp) and a bag of baby fava beans. Favas are in season now, but I´m not growing them this year. These are left from a previous year. In the cupboard, a packet of fideos, thin soup noodles, and some canned tomatoes.

My ingredients suggest a cazuela de fideos, a Málaga-style seafood and noodle casserole. Instead of the traditional version, with clams or bacalao (salt cod), this one, with scallops, will be special.

The fideo noodles cook right in the liquid (flavorful stock). A sofrito of onions, garlic and tomatoes fried in olive oil makes the flavor base. (The sofrito can be made in advance.) Cook the noodles in a clay cazuela if you have one or use any heavy pan.The finished noodles should be juicy, saucy, not soupy. A sprig of fresh mint is the typical garnish, making the dish truly “Málaga style.”

Potato is typical in this dish, yes, with pasta. Also typical are peas, fava beans, artichokes. I scattered the tiny (defrosted and peeled) favas on top of the fideos, like a garnish. Fresh ones can be cooked with the noodles. I also considered pureeing them with mayonnaise and garlic to make a green-tinged alioli to serve alongside.


Par-boil the diced potatoes for 2 minutes. Drain and reserve them.

Heat the oil in a cazuela or heavy pan. Sauté the scallops with the clove of garlic on medium heat, turning to brown them lightly on all sides. They should be just cooked through. Remove the scallops from the pan. (Leave the garlic in the pan.)


Sprinkle the saffron into the oil in the pan. Stir in the fideos and potatoes and sauté for 1 minute. Add the sofrito and broth. Bring to a boil, then reduce heat so liquid bubbles gently. Season with salt and pepper. (If broth and sofrito were salted, additional salt may not be needed.) Cook, stirring occasionally, until fideos are al dente and most of the liquid has been absorbed, about 6 minutes.

Place the sautéed scallops and fava beans on top of the fideos. Cover the pan and allow to set 5 minutes.

Serve the fideos and scallops garnished with snow peas and sprigs of mint. 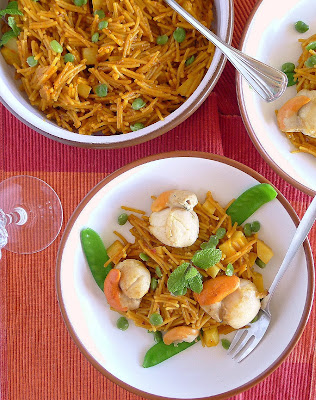 Sofrito usually is made with fresh tomatoes. Here's a recipe for making it with canned tomatoes. You only need half of this thick sofrito paste for the fideos recipe. Store the rest in the fridge for use in another recipe.

Heat the oil in a heavy skillet. Sauté the onion, garlic and green pepper on medium heat until softened, 5 minutes. Add the tomatoes, salt and pepper. Cook on medium-high until all of the liquid is cooked off and the vegetables begin to “fry” again in the oil.

Add the Sherry, raise the heat and cook off all the liquid. Let the mixture just begin to brown. Remove from heat.

Puree the sauce in a mini-processor. 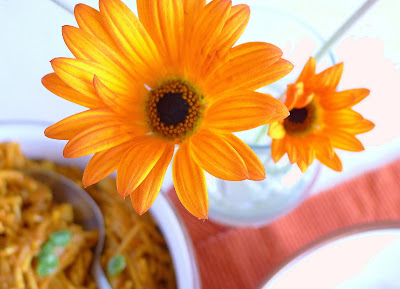 DINNER IN A TIME OF LOCKDOWN

And, on the seventh day, I shopped. I parked as far from the market as possible, for a chance to stretch my legs, and donned rubber gloves. (No masks available anywhere.) Officers on patrol pulled up next to me, saw my shopping bags and moved along without a word. At the market, the butcher and fruit vendor handed over receipts to show as proof that I was out and about to purchase food, almost the only movement outside home that is permitted. Such is life during the coronavirus crisis lockdown.


Another customer at the butcher’s (keeping a 1-meter distance from others) asked if business was suffering with people keeping to their homes. Francisco, the carnicero (butcher), replied that, no, he had had the best four days ever. “But, nobody is buying meat with any joy,” he said. It seemed true. Usually a feast-day food, meat and poultry were being purchased for survival. Everybody seemed pretty glum.

But I was overjoyed to have a fat pollo amarillo (free-range “yellow” chicken) for roasting, a bundle of fresh asparagus and local avocados to replenish my menu planning for another week in quarantine.

Still, I haven’t eaten too badly in the seven days of isolation, using frozen and canned foods plus produce from my garden—cabbage, kale, chard, carrots and snow peas. Here are some of the dishes I ate during the first week of lockdown.

Heat oven to 400ºF. Line a baking sheet with parchment.

Combine the cauliflower rice and almond flour in a bowl. Add the egg, cheese, salt, pepper and pimentón.

Drop spoonfuls of the cauliflower mixture onto the baking sheet. Use the back of the spoon to press them into 2-inch patties.