HOW NOT TO COOK YOUR FISH

Eat it raw! But, freeze it first.

Many cuisines feature raw fish in one form or another. In Spain, we have that tapa bar favorite, fresh anchovies in vinegar (boquerones en vinagre). In Peru, Chile and elsewhere in Latin America, ceviche, raw fish “cooked” in lime juice is famous. The Scandinavians have salmon cured with salt and dill, such as gravad laks, and the Germans have pickled herring. And, of course, there’s Japanese sashimi and world-popular sushi.
I love raw fish. Sashimi used to be one of my favorite dishes to serve to guests. I bought exquisitely fresh, almadraba-caught tuna, from the fish market on the coast near where I live. The vendor would cut me a sliver to taste from the slab of tuna loin on the slab. At home I occasionally prepared vinegar-marinated raw anchovies and ate them frequently in tapa bars.
But, freeze it first?
Tapa bars and restaurants can no longer serve raw, marinated boquerones. According to European Union and Spanish governmental regulations, fish to be served raw or partially cooked must be frozen before being served to the public. That is because raw fish might harbor a parasite, anisakis. If ingested, the live anisakis can cause a pretty bad bellyache. Freezing destroys the anisakis. Cooking destroys the anisakis. Your favorite sushi bar uses tuna that has been frozen. Health guidelines recommend that, at home, you freeze fish that you intend to eat raw.
The U.S. FDA (Food and Drug Administration) stipulates the following directions, but leaves enforcement to local health officials.

The European Union and Spanish health rulings vary slightly (5 days instead of 7), but are basically the same. The freezer compartment of most home refrigerators doesn't usually freeze below -4ºF (-20ºC), therefore the freezing time is longer than if frozen in industrial freezers at lower temperatures.
Fish that is to be cooked does not have to be frozen. Cooked fish (internal temperature of 145ºF (60ºC) is safe to eat as parasites are destroyed in cooking. (However, preparations such as tataki, with seared exterior and raw or very rare interior flesh, should be treated as for raw fish.)
It should also be noted that fish is highly perishable. Keep it chilled, handle as little as possible and wash hands, knives and cutting boards frequently. Defrost frozen fish in the refrigerator rather than at room temperature.
Here’s how I didn’t cook my fish—Fresh Anchovies Marinated in Vinegar, Tuna Tartare, Corvina Ceviche and Sashimi of Bonito and Bream.
Fresh Anchovies Marinated in Vinegar
Boquerones en Vinagre 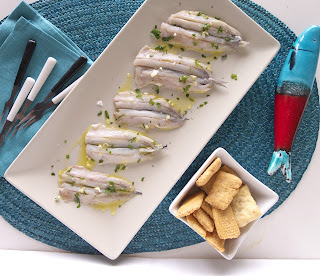 Soaking the filleted anchovies in ice water helps to whiten them before they are marinated in vinegar.
As an experiment, I froze one batch of filleted fish before marinating, another batch after draining off the vinegar and a third, after marinating and dressing with olive oil. I didn’t notice a great difference in texture—all three batches seemed softer than the way I remembered boquerones that had never been frozen. Adding the oil is not a good idea because the frozen oil congeals.
Without thinking, after marinating and before freezing the anchovies, I picked one up to taste it. Hopefully, it did not have anisakis larva!
1 pound fresh anchovies
Ice
½ teaspoon salt
1 cup white wine vinegar
Shredded lettuce, to serve (optional)
Chopped parsley
1 clove garlic, minced
Flaky salt
Extra virgin olive oil
Bread or toasts to serve
Remove head, guts and spines from the fish. Wash them well and place in a bowl with ice water. Cover and refrigerate 40 minutes. Drain and rinse the anchovies again. 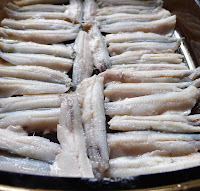 Lay the anchovies, opened flat, skin side down, in a single layer in a shallow, non-reactive bowl or tray. Sprinkle with the salt. Carefully pour over enough vinegar to completely cover the anchovies. Cover the bowl tightly and refrigerate at least 45 minutes or until the anchovies appear “cooked”—firm and opaque.
Drain off the vinegar. Pat the anchovies dry. Place them in a clean container. Press a sheet of plastic wrap between layers. Cover tightly and place the container in the freezer. Freeze according to the temperature instructions given above.
Thaw the anchovies in the refrigerator. 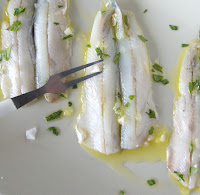 To serve, place shredded lettuce on a serving plate. Arrange the anchovies in a single layer, skin-side down. Sprinkle them with parsley, minced garlic and flaky salt. Drizzle generously with oil. If the anchovies are not to be served immediately, cover them with plastic wrap and refrigerate until serving time. Serve with bread or toasts.
Tuna Tartare
Tártara de Atún 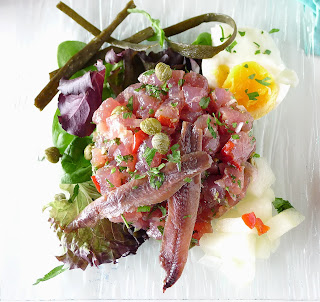 I asked the fish vendor (at a large hypermarket), “which fish can I serve raw?” The only one he recommended was the tuna, which was fresh frozen tuna that had been thawed.
There are no official standards for “sushi-grade tuna” and, in Spanish markets, the term is not used. Generally, it means that the retailer vouches for the safety of eating it raw. I surmise after a little researching that tuna is less susceptible to anisakis than other fish, meaning less risk, as long as the fresh fish has been inspected.
The tuna I bought was frozen fish that had already been defrosted. There was no question of refreezing it. If I wanted to serve it raw, it had to be immediate.
Tuna tartare has many renditions. I’ve chosen to make the one most like tartare made with raw beef—capers, salt-cured anchovies, shallots, mustard. Oddly, I felt a little squeamish about the traditional raw egg yolk! Actually, it’s fine if, instead of plopping it on top of the minced tuna, you blend it into a smooth sauce. If you prefer not to consume raw egg, serve the tartare garnished with a quartered soft-boiled egg.
To serve 4 as a starter.
12 ounces sushi-grade tuna
2 tablespoons minced shallot
2 tablespoons finely chopped parsley
3 canned anchovy fillets, drained of oil
2 tablespoons chopped capers
2 teaspoons minced piquillo peppers
Salt
Freshly ground black pepper
2 tablespoons extra virgin olive oil
2 teaspoons Dijon mustard
2 teaspoons lemon juice
1 teaspoon Sherry vinegar
1 raw egg yolk (optional)
Salad greens to serve
Optional garnishes:
Seaweed spaghetti
Sprouts or edible flowers
Soft-boiled egg, quartered
Pickled melon or sweet pickles
Thaw the tuna if it is frozen. Before it is completely thawed, use a very sharp knife to cut it into very small dice (approximately ¼ inch). Place in a bowl. (If not ready to serve the tartare, cover and refrigerate the tuna.)
Place the tuna in a bowl. Add the parsley. Chop the anchovies and add to the tuna with the capers, peppers, 1 teaspoon of salt and black pepper. Stir in 1 tablespoon of the oil. 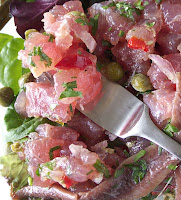 In a small bowl mix the mustard, lemon juice and vinegar. Whisk in the remaining 1 tablespoon of oil. Whisk in the raw egg yolk, if using. Stir 2 tablespoons of this sauce into the chopped tuna. Serve the remainder on the side.
Place salad greens on individual plates. Mound the tuna tartare mixture on the plates or press it into round molds and unmold onto the plates. Garnish, as desired.
Corvina Ceviche
Ceviche de Corvina
For this and other marinades with acidic ingredients such as lemon, lime or vinegar, use a non-reactive container. Those are containers of glass, ceramic, stainless steel or enamelled. If possible, use a bowl with a cover, otherwise cover with tightly with plastic wrap so that the marinade and fish odors don’t permeate other items in the fridge.
Acid marinades slow bacterial contamination, but do not halt it. Keep the fish and other ingredients chilled at all times.
In South America, lime juice is traditionally used to marinate the fish, but lemon juice or sour orange can also be used. I’ve got plenty of lemons, so I made this variation.
How long to marinate the fish? Long enough for the surface of the pieces to “cook” in the acid. They should turn opaque-white, but may stay soft and pink in the center. Over-long marinating results in fish that is hard, chewy and dry. Timing depends on size of the pieces of fish. Mine, cut in strips about ¼-inch thick, were “done” in 15 minutes.
Other ingredients to incorporate in the ceviche vary by country and individual preferences. Some usual ones to try—avocado, sweet potato, olives, mango, jícama, cucumber, corn kernels, toasted corn kernels, fried plantains. Serve with tortilla chips or crackers. 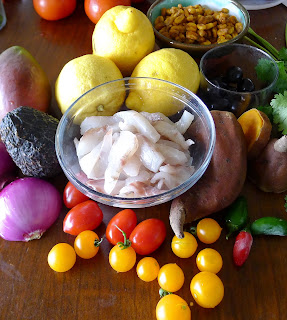 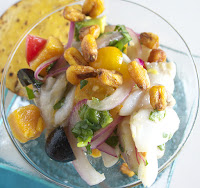 Drain the fish, saving the liquid. Place the fish in a bowl and add the salt and oil. (If not to be served immediately, cover and refrigerate. Chill the reserved liquid as well.) Shortly before serving, add the tomatoes, chile, sweet potato, cilantro, olives and avocado. Stir in some of the reserved liquid. Mix well.
Serve the ceviche on plates, in bowls or cups with a scattering of corn kernels and tortilla chips alongside.
Sashimi of Bonito and Bream
Sashimi de Bonito y Dorada
Sashimi is the Japanese art of serving sliced raw fish with accompanying dipping sauces and garnishes. It is a lovely starter for a summer meal. (Adding nori seaweed and cooked rice dressed with vinegar turns it into sushi.)
Bonito (Sarda sarda) is a meaty, dark-fleshed fish wild-caught in southern waters. (It’s not to be confused with bonito del norte, which is albacore tuna. Japanese bonito, katsuo, is actually skipjack (Katsuwonus pelamis, listado in Spanish.) Melva, frigate mackerel, is similar to bonito.
The bonito, with its firm texture and mild flavor, is fine for sashimi or, lightly grilled, as tataki. I bought a whole one, weighing about 2 ½ pounds and had it filleted. Once home, I finished the job, removing the line of small bones down the center of the two fillets and separating them into four fillets. I removed the skin. The fillets went into the freezer for the prescribed length of time. I used only one fillet for the sashimi; the remainder went into a cooked dish (marmitako).
Dorada is gilt-head bream, a firm-fleshed, succulent white fish. It is both wild-caught and produced by aquaculture. Supposedly, farmed fish is parasite-free, because it doesn’t feed on wild fish that may carry the larva. However, after skinning and removing pin bones from my farm-raised bream, I chose to freeze it. Served as sashimi, it tasted great but the texture was no longer as firm as for fresh, never-frozen fish. Next time, I will risk not freezing it.
It is easier to slice the fish while it is still partially frozen. Keep knives very sharp. 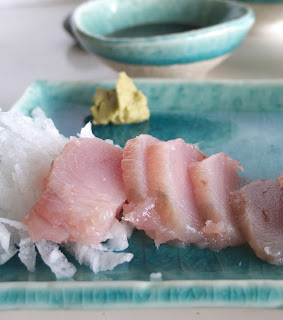 Serve the sliced fish with a dipping sauce, such as ponzu (recipe for a Spanish variant is here) or simply soy sauce mixed with grated ginger and with wasabi green horseradish. Grated carrot, micro-greens, shredded white radish, cucumber curls can be used as garnishes.
Bonito, skinned and bone-free, thawed, about 1 ½ ounces per person
Bream, such as gilt-head, skinned and pin bones removed, thawed about 1 ½ ounces per person
Dipping sauce
Garnishes
Use a very sharp knife to slice the bonito into rectangular 3/8-inch slices. Cover tightly and refrigerate until ready to assemble the plates.
Use a very sharp knife, held at an angle, to slice the bream into paper-thin slices. Cover tightly and refrigerate until ready to assemble.
Arrange the sliced bonito on a plate in a row, like dominoes. Arrange the sliced bream in small, shallow bowls or on a small plate in a rosette. Use shredded carrot and radish as garnishes. Place a dab of wasabi on each plate. Serve with the dipping sauce.
More about the anisakis parasite and how to avoid it from the Spanish government consumer ministry: https://www.aesan.gob.es/AECOSAN/docs/documentos/publicaciones/seguridad_alimentaria/cartel_anisakis.pdf
Posted by JANET MENDEL at 1:20 AM