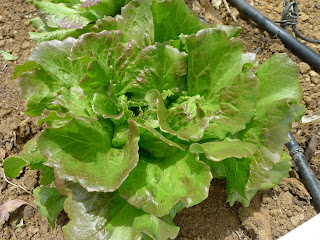 No complaints, really. I happily eat a huge salad for lunch every day. Huge, as in a whole lettuce just for me. With additions of other vegetables, both raw and cooked, and a bit of tuna, cooked chicken, hard-cooked egg or cheese I turn salad into a complete meal.

The Spanish ensalada mixta, or mixed salad, is a big production, served as a starter for a family meal. This is a “table salad,” served on a big platter and meant to be shared amongst the diners round the table. In traditional style, everybody eats from the serving dish, rather than dish out individual servings.

Someone at the table does the honors of dressing the salad—lots of extra virgin olive oil and a little white wine vinegar are drizzled over the salad. Salt. That’s it. No garlic and no herbs except for a hint of thyme and fennel in the home-cured olives. Unlike a Greek salad, no cheese. And, no, don’t toss the salad.

Just reach your fork over the platter and spear a juicy tomato, a chunk of tuna. A piece of bread in the other hand helps to scoop up forkfuls of salad. When most of the salad has been eaten, use the bread to soak up the oil and juices at the bottom of the platter—sort of instant gazpacho.

As much as I enjoy the simplicity of ensalada mixta, for my lunchtime salads I am more likely to make a slightly more complex vinaigrette. Here’s a recipe I like with a mixed vegetable salad—sliced new potatoes, cooked beans, tomatoes and greens.

Combine all the ingredients in a small bowl and whisk together. Makes enough for a large salad or two smaller ones. Dressing keeps, covered and refrigerated, up to 2 days.

POTATOES "A LO POBRE" ARE A CLASSIC

I’m on a potato kick. A basket of freshly-dug potatoes has inspired me to cook them just about every day. As much as I love eating steamed new potatoes with olive oil and chopped parsley, after a few days I’m ready for some variety.


Spain has dozens of different potato dishes (I counted 35 potato recipes in one of my Spanish cookbooks). Many of them are meant to be sturdy, economical main dishes. Such is Patatas a lo Pobre—“poor folk’s potatoes”—a classic recipe. It may be poor in meat, but is rich in flavor. And, while it serves nicely as a vegetarian dish, it is more frequently encountered as a side with fish, poultry or meat. I serve it alongside herb-roasted pork loin or baked beneath a whole fish.

Some folks call the dish patatas panaderas—“baker’s potatoes”—if it is made in an oven. The two recipes are pretty much the same—layers of sliced potatoes, plenty of olive oil, onion, garlic and parsley. The version I learned to make in the village also has juicy tomato slices and green pepper.

You can vary the basic recipe for potatoes a lo pobre. I sometimes add other vegetables such as sliced zucchini or shredded chard. Chopped ham or bacon turns “poor” into something a little richer. Substituting smoked pimentón (paprika) for regular pimentón gives an extra flavor dimension, especially traditional in Extremadura (western Spain), where smoked pimentón is made.

The potato casserole can be cooked on top of the stove instead of in the oven, but you will need to use more oil and more liquid. Don’t stir the potatoes, but shake the cazuela occasionally. The bottom layer may form a crust—a delicious bit to scrape up.

The potatoes can be peeled and sliced in advance—leave them covered with water until ready to assemble the casserole.

The cooked potatoes should be nice and juicy. If they are cooking too fast, add additional water or white wine so they don’t dry out.

If using a heat-proof casserole, place on a medium heat on top of the stove until the liquid begins to simmer. Then cover the casserole with a lid or foil and bake until potatoes are fork tender, about 60 minutes.

Note, Sept. 2019: All these years later, I realize I have been incorrectly calling this potato dish patatas a lo pobre. It's really patatas panaderas, or "baker's potatoes," always prepared in the oven. A recipe for the verdadero patatas a lo pobre is here.
Posted by JANET MENDEL at 1:44 PM 1 comment:


In my story in today’s Los Angeles Times food pages I take you on a seafood soup tour round the coastlines of Spain. Read the article and recipes here http://www.latimes.com/features/food/la-fo-spanish-soups-20120512,0,5951228.story. Then, read on for a recipe that didn't appear in that article.

With more than 3000 miles of coastline, it’s no wonder Spain has such a variety of seafood soups. Spain occupies most of the Iberian peninsula, surrounded by oceans—clockwise from the top, the Atlantic, the Cantabrian Sea and the Bay of Biscay, where Spain curves around to meet France. Skip across the land border with France, connecting Spain to the European continent, and you arrive on the Mediterranean coasts, stretching all the way from the French border (and not so distant from bouillabaisse country) to the Straits of Gibraltar.

Pass through the Straits and you are back to the Atlantic Ocean. (Portugal—no slouch when it comes to seafood soups—occupies much of the western coast of the Iberian peninsula.) Two Spanish archipelagos, the Balearic Islands in the Mediterranean between Spain and Italy, and the Canary Islands, in the Atlantic, off the coast of Morocco, contribute to Spain’s mix of seafaring soups.

Space limitations meant that one of my favorite seafood soup recipes didn’t make the cut in the LA Times —the fabulous suquet of Barcelona. So, here’s that recipe.

In Barcelona, on the Mediterranean, in the old Barceloneta fishing port, is a restaurant called El Suquet de L’Amirall. Here, chef/proprietor Quim Marqués, interprets the traditional dishes of fishermen and fishermen’s wives.

The name of the restaurant, “suquet,” comes from the best-known Barcelona fish soup. In his book about the seafaring cuisine of Barcelona, La Cocina de la Barcelona Marinera, Quim explains that suquet was typically made on board fishing boats when the catch was abundant.

The secret to suquet is the picada, a mixture of crushed garlic, parsley and almonds that is stirred into the broth. A lightly aromatic stock in which to cook the fish and a dollop of alioli, garlic mayonnaise, to serve it turn this Barcelona dish into one of the best seafood soups in the world.

What fish to use? Monkfish works really well because it's sweet and flavorful and won't disintegrate in cooking. Halibut or cod could be used as well, or, experiment with other white fish.

Add remaining fish, heads and trimmings, salt, bay leaf, lemon, parsley, pepper and water. Bring to a boil, skim off the froth that rises to the top and reduce heat so liquid bubbles gently. Cover and cook for 45 minutes.

Allow to cool for 15 minutes, then strain the stock. Press on the solids to extract all the liquid. Any bits of cooked fish or cuttlefish, without bones, can be picked out and saved to add to soup, if desired.

Makes about 8 cups of stock. Stock can be kept, refrigerated, up to two days or frozen for up to two months.

For the almond picada:

Heat the oil in a small skillet. Fry the almonds, garlic and bread, turning, until lightly browned on all sides. Remove and cool briefly.

Grind the almonds, garlic, bread and parsley, along with any remaining oil, in a mortar or in a mini food processor. The picada is ready to add to soup or stew.

For the alioli (garlic mayonnaise):

Put the garlic and egg in a blender and pulse until garlic is finely chopped. With the motor running, pour in the oil in a slow trickle, allowing it to be absorbed by the egg before adding more. Blend in all the oil. The sauce will emulsify and thicken. Blend in the salt and lemon juice.

The sauce will keep, refrigerated, for up to 2 days.


For the fish soup:

Cut the tomatoes in half and remove core. Use the coarse side of a box grater to grate the tomatoes. Discard the skins.

Heat the oil in a wide pot or deep skillet. Add the tomato pulp and fry on a medium-high heat until it turns darker in color. Add the sliced potatoes, the almond picada and the fish stock. Bring to a boil, then reduce heat and simmer, covered, until potatoes are almost tender, 15 minutes.

Add the wine, chunks of fish and clams. Bring to a boil, then simmer, uncovered, until potatoes and fish are cooked and clam shells opened, 10 minutes. Add the shrimp and season with salt and pepper. Cook another 2 minutes, or until shrimp are cooked.

Place alioli in a small bowl and stir in 1/2 cup of the hot soup to thin it. Stir the alioli into the soup immediately before serving.

Serves 4 as a main course.

LUNCH AT A CHIRINGUITO BY THE SEASIDE

You can’t get much closer to the water without getting your feet wet than at a chiringuito. A chiringuito once was a beach shack where local fishermen served up simple foods—spit-roasted sardines, fried fish, wine-steamed clams.

Nowadays, thatch-roof shacks have been replaced by brick-and-mortar buildings and modern kitchens take the place of the rustic cooking facilities of yore.  But a chiringuito is still a great place for a lunch at the beach.

What’s to eat? Fish and shellfish of all kinds, from the humble to the sublime. Any chiringuito worth its salt will have a guy fanning a wood fire to make espetones, sardines speared on skewers that are stuck into the sand to roast in front of the fire.  From the plancha, or griddle, come big shrimp (I so love those bright red carabineros) and whole fish such as sea bass, golden bream and sole. Specialties include cooked-to-order paella, whole fish baked in a salt crust or on a bed of potatoes with onions and wine. (The last two are priced by weight of fish, costing about €40 per kilo, or about $50 for a two- pound-fish, weighed with the head.)


But we were not after the expensive fish, but the classic at chiringuitos on the Málaga coast, where I live,  pescaito frito, fried fish. We ordered a fritura, a mixed fish fry (two of us shared a single order costing €12 (under $16). 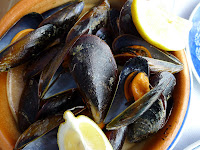 We had our taste buds primed for coquinas, tiny wedge-shell clams, but were disappointed that they were not available. So we opted for mussels instead, which come from the northwest Galician coast. They are cooked, marinera-style, with olive oil, sliced garlic, wine and parsley.

A typical fish fry consists of boquerones, small, fresh anchovies; calamares, rings of squid; salmonetes, tiny red mullet; small sole (sand-dab size), and baby hake. The small hake, called pijota or pescadilla, are often curled into a circle, with their tails caught between their teeth, before flouring and frying.

The procedure is simple. Dredge the fish in flour, then shake off the excess. Local cooks use a coarse sieve to shake off excess flour. Deep-fry each type of fish separately in hot olive or vegetable oil. Drain briefly, then serve all the fish, piping hot, heaped on a platter with lemon wedges.

As much as I adore fresh anchovies, I have to say that my most favorite little fish is the red mullet. And, in early May, before the beach season is in full swing, it was relatively easy to find parking space on the Paseo Marítimo and stroll along the beach to our lunch destination. This was chiringuito heaven!