GAZPACHO FROM THE GARDEN 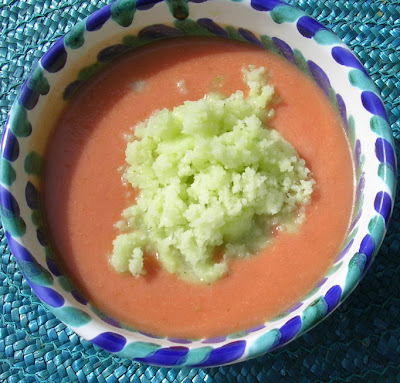 My gazpacho garden is about to bear fruit. Summer’s sun is turning the tomatoes crimson. They’ll soon be gloriously ripe and sweet. I’ve got the first crinkly, thin-skinned  green peppers and fat cucumbers as well as onions and garlic harvested earlier. A jug of my own extra virgin olive oil, a chunk of stale bread and tangy lemon juice complete the ingredient list for the season’s first gazpacho.

Get a jump on the season--enjoy! 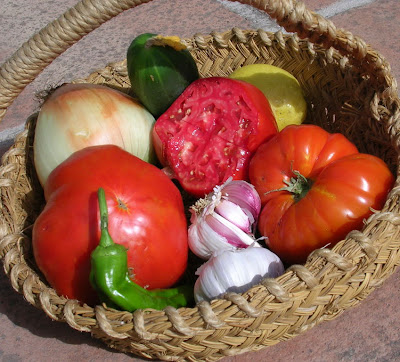 INGREDIENTS FOR CLASSIC GAZPACHO. JUST ADD OLIVE OIL AND BREAD FOR THICKENING.
Posted by JANET MENDEL at 10:34 AM 3 comments: 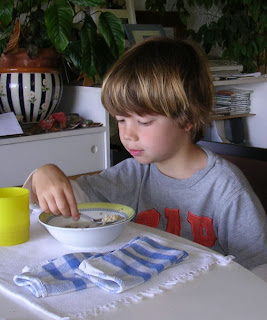 “GranJan, you’re a good cooker,” said my six-year-old grandson Leo. Observing that the kid really liked tuna, really liked pasta, I guessed that a summer pasta salad was likely to hit the spot with him. His dad, Ben, suggested that I was “a good cook,” not a “cooker”. But, hey, I’ll take all compliments with a smile.

The critics were not so easy on me a week later, when the other set of grandkids arrived. Anticipating hungry children and parents after a delayed trans-Atlantic  flight, I prepared what I thought was a sure-fire kid-pleaser, a classic Spanish tortilla de patatas, potato tortilla (potatoes slow-fried in olive oil with a little onion and eggs to set the mixture into a thick, round cake). 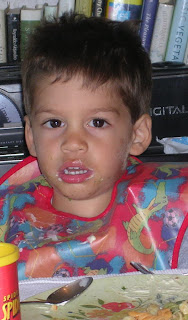 Nico, two and a half years old, hungrily took a bite and, blech, out it all came down the front of his shirt. Lucas, five years old, tried it and also rejected it, if rather more politely. Their father, my son Daniel, who grew up on tortilla, happily ate most of it. “Heinz catsup,” he said. “Needs catsup.”  (Confession: I served catsup with tortilla when they were kids. I was not after authenticity.)

Figuring to go with a winner, the next day I tried them on the tuna-mac salad that their cousin liked. Again, instant rejection. “It’s the chopped onion in it,” said Daniel. “They’re purists—pasta and nothing.”

I fared somewhat better when I took Lucas with me to the huerta to pick strawberries, green beans, zucchini, cherry tomatoes, onions and lemons. He was happy to slice the zucchini, which I sauteed with cherry tomatoes. Hold the onions; keep the fresh basil on the side where it could be easily ignored. And he astounded me by eating wedges of lemon. 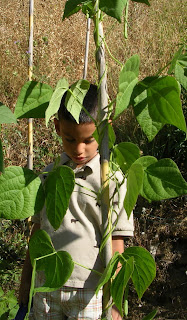 It turned out that little Nico had an appetite for almost everything, as long as there were no onions. Pork, chicken, fish, asparagus, broccoli. A dab of mayonnaise was his gourmet sauce. Perhaps I’ll try that tortilla again one day before they leave.

Some tapa bars present super-size tortillas, almost 2 feet in diameter and more than 3 inches thick. They are cut into thick squares and served with bread. Tortilla also makes a nice supper dish and is terrific packed in a picnic hamper. In Spain, tortilla is rarely served with a sauce, but might be paired with a juicy vegetable dish such as pisto (recipe here ). Of course, you could always serve it with catsup or mayonnaise! 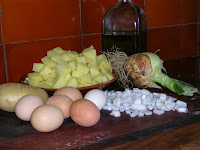 Heat the oil in a no-stick or well-seasoned 9-inch skillet. Add the sliced potatoes and turn them in the oil. Let them cook slowly in the oil, without browning, turning frequently. If using onions, add them when the potatoes are partially cooked. The potatoes will take 20 to 30 minutes to cook.

Meanwhile, beat the eggs in a bowl with the salt.

When potatoes are tender, place a large plate on top of the skillet. Tilt the pan so the oil runs to one side. Holding the plate tightly, carefully tip the pan and drain the oil into a small heatproof bowl. Stir the potatoes into the beaten eggs.

Return a spoonful of oil to the pan over medium heat. Pour in the egg-potato mixture. Spread it evenly. Reduce heat and cook, without stirring, until the tortilla is set on the bottom, about 5 minutes. Do not allow the bottom to brown too much. You can shake the pan occasionally to make sure the tortilla doesn’t stick on the bottom.

Again, place the plate on top of the pan. Working over a bowl to catch any drips, hold the plate tightly in place and turn the pan upside down, reversing the tortilla onto the plate. Slide the tortilla back into the frying pan. Let it cook on the bottom, 2 minutes.

Lift the front edge of the tortilla and carefully slide it out of the pan onto a serving dish or cutting board. Cut into squares to serve as a tapa or into wedges if serving as a lunch dish. Serve hot or room temperature. 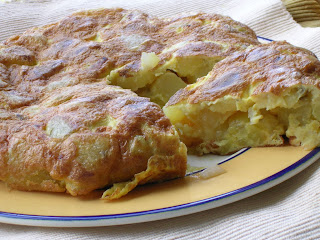