They closed down the party. No Carnaval this year, due to the ongoing pandemic. Instead of fabulous masks and feathered headdresses, rollicking music and all-night revelry, we have double-masking and curfews.

Carnaval is the pre-Lenten festival, also known as Mardi Gras (theoretically the Tuesday before Lent), that goes on for a couple of weeks and is celebrated throughout Spain. This year it will be virtual.
I feel sorry for the many makeup artists, costume designers and seamstresses who are out of work this year. (The spangled costume and flamboyant headdress of a Canary Island carnival queen can weigh more than 400 kilos/880 pounds and strut some 7000 feathers. They need rollers so that the wearer can move.)
But, the confectioners and bakers are still doing good business, as folks line up to buy typical Carnaval sweets and pastries. With home quarantine, probably many are even making some of the traditional goodies at home.
In Galicia (northwestern Spain), a typical Carnaval pastry is orejas, or orellas de Entroido in Galician, “ears” for Carnaval. The ears are pieces of dough fried crisp and sprinkled with sugar. They are a delight with coffee, tea, hot chocolate or a copita of fiery aguardiente de orujo, clear grape brandy.
In “green” Galicia, where dairy cattle thrive, butter is more prevalent than in Mediterranean Spain. Butter is used for making the simple dough. Rendered pork fat (lard) or “vegetable” oil, usually sunflower oil, are also used. In Castilla-La Mancha, similar fried pastries, called hojuelas, are made with only olive oil. As are a similar Sephardic Jewish treat called orejas de Hamán, Haman’s ears, traditional for the holiday of Purim (which this year is from the evening of February 25 until the following evening.)
These ears are easy to make—cut free-form “ears” from dough rolled out very thinly. Don’t flour the work surface; oil it lightly.
If you want to get artistic, after placing a piece of dough in the frying oil, use two forks to push edges together, crimping the dough into the form of an ear. I recommend olive oil for frying the pastries, although any vegetable oil can be used. You don’t need deep oil for frying. A half-inch of oil in the frying pan is sufficient. Add additional oil as needed. Moderate the heat so the dough doesn’t brown too quickly. 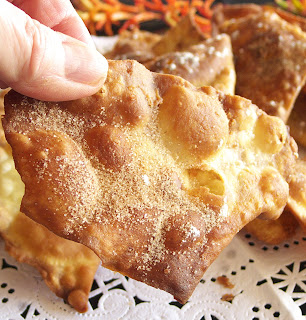 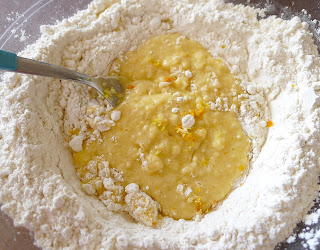 Place the flour in a mixing bowl and stir in the salt. Make a well in the center and pour in the liquid ingredients. Use a wooden spoon or fork to mix until the dough forms a soft ball. Knead the dough briefly, either in the bowl or on a work surface. Form into a smooth ball and cover with a clean cloth or plastic wrap. Let the dough stand at room temperature for 1 hour.
Place olive oil in a skillet to a depth of ½ inch. Place on moderate heat.

Lightly oil the work surface and the rolling pin. Divide the dough into 8 equal balls. Roll out one ball as thinly as possible. Use a sharp knife to cut the dough into “ears,”—triangles, rhomboids, trapezoids or free-form. Transfer the cut shapes to the hot oil. Fry them until golden on both sides, 2-3 minutes. Remove the fried dough with a skimmer and drain on paper towels. Continue rolling, cutting and frying the remaining dough.
Combine the granulated sugar and cinnamon. Sprinkle the fried ears generously with the cinnamon sugar. If desired, sprinkle with confectioner’s sugar as well. (Alternatively to the cinnamon sugar, boil a few tablespoons of honey with a little water for 1 minute. Brush the honey syrup over the ears.) 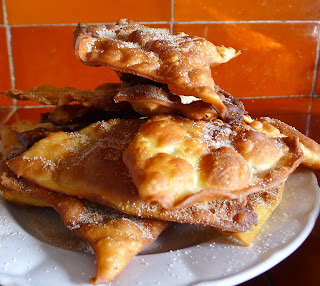