To eat fried fish at a chiringuito, a  beach-side restaurant, on Málaga’s Mediterranean coast is to experience a profound sense of place. Here, close enough to the sea to get your toes wet, where the fishing boats are pulled up on the sand, the fish are fresh. Where olive groves still cover the hills (admittedly, fewer, as resort developments have sprung up), olive oil is on its home turf. This is fried fish at its best.

The fish used for a mixed fish fry are small ones--four-inch fresh anchovies; sole that measure only six inches; baby hake, called pescadilla; tiny red mullet, arguably the tastiest of Mediterranean fish; rings of squid. All are dusted with flour, fried golden in bubbling olive oil and served piping hot, heaped on a platter with nothing more elaborate than lemon to accompany them.


How to translate this Mediterranean fish fry to other shores?. You will need three or four different whole small fish. Some fish I found in American markets that could be used include small flounder, sand dab, Boston whiting (very much like pescadilla), herring, tiny mackerel, smelt, butterstar, small white snapper. Fish on the bone hold together better than fillets, though certainly fillets or crosswise slices of fish could be substituted for whole ones.

Fish should be gutted and the heads removed. Sole or flounder are usually skinned. Slice any fish that are more than 8 inches long into 2-inch segments. Squid should be cleaned and cut in rings. After cleaning, leave the fish in a colander so it doesn’t sit in leaked liquid.

Have a large bowl or tray of flour ready. Dredge several small fish or a handful of squid rings in flour, then transfer them to a sieve and shake off excess flour. Spanish cooks use a flat-bottomed coarse sieve with a wooden frame. Removing excess flour prevents it from falling to the bottom of the pan and burning.

The oil is important. Olive oil is best and traditional. It’s why fried fish is so popular in Andalusia. But, truth be told, most of those chiringuitos and fry shops don’t use real olive oil, because it’s expensive. Cheaper vegetable oils such as sunflower are used instead.

But, if you use extra virgin olive oil, the results will be astonishingly good. Forget any old wives’ tales about olive oil and low smoking point. Olive oil is very stable at high temperatures. Foods absorb less of the oil in frying compared to those fried in other oils. In any case, you don't need to heat it beyond 360ºF.


A deep-fryer is handy because it allows you to fry a larger quantity of fish at one time than you can in a frying pan. The frying basket makes it easy to submerge the fish and then remove it. Plus, electric fryers have thermostatic controls so you can regulate the temperature.

However, you can prepare great fried fish without any special equipment. You will need a deep skillet or heavy sauté pan with sloping sides. A flat-bottomed wok would work too.

The oil needs to be only deep enough to completely cover the largest pieces of fish. In the case of this fish fry, a depth of 1 ½  inches is probably sufficient. Depending on the size of the frying pan, you will need 4-6 cups of oil. Don’t fill the pan more than one-third full.

Use a deep-frying thermometer if you have one. Heat olive oil to 350-360º.  At this temperature, it takes a cube of bread about 25 seconds to brown. Olive oil is not heated to temperatures as high as other cooking oils (usually 375º). For this reason, combining two kinds of oil is not recommended. The coating of flour on the fish immediately forms a crust, so the oil doesn’t penetrate. The food will fry to a nice gold, not dark brown.

Fry each type or size of fish separately. Fry the larger and thicker ones first. Use a long-handled skimmer or spatula to carefully place the floured fish in the hot oil. Add fish in one layer, without crowding. Sometimes moisture escapes from the fish and causes the oil to splutter, so stand well back.


Let the fish fry until golden. Timing is everything and this takes experience. Small pieces of fish will be cooked in the time it take them to turn golden, 2-4 minutes. Use the skimmer to remove the fish. Place it on a tray lined with paper towels. Salt it lightly.

When all the fish is fried, serve immediately.

The oil can be cooled, strained and stored in a dark place to be used one or two more times.

Serve the mixed fish fry with any fresh salad—greens, roasted red peppers, a chopped salad such as pipirrana or tangy gazpacho. Traditionally, the fried fish is accompanied by only lemon. No sauce is needed. 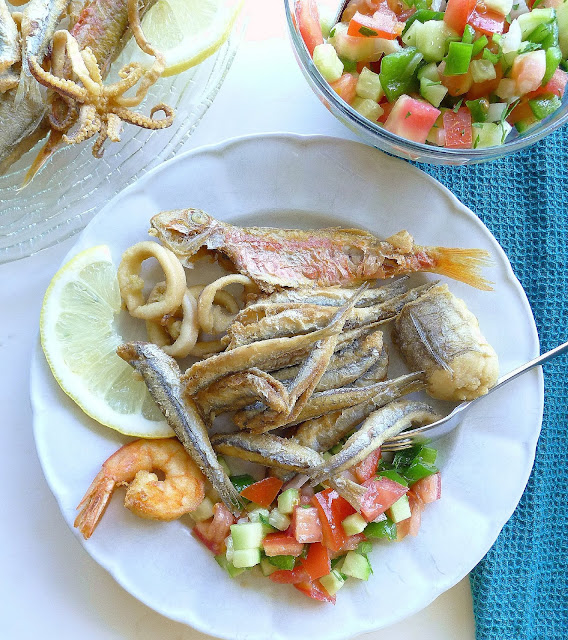 In Spain you can buy special flour for frying, harina para freir. Some brands are just coarse wheat flour. Others are a combination of wheat flour and chickpea flour or wheat flour, cornstarch and cornmeal. Some cooks like to add fine bread crumbs or fine semolina to the flour to give the coating a little extra crunch. But plain, all-purpose flour is fine.

Dredge fish in flour, shake off excess and fry in hot oil, a few pieces at a time, until they are golden. Remove and drain on paper towels. Sprinkle with salt.