What a gorgeous early summer we’re having here in southern Spain. Temperatures are below average and a fresh breeze (a levante, east wind) is blowing. Cooler weather means the garden is slow to produce. Tomatoes and peppers are still weeks away. 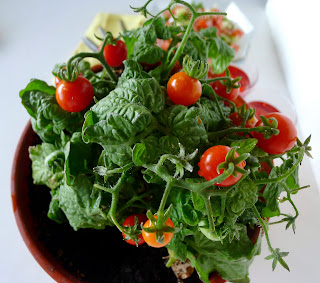 Meanwhile, I have pots of cherry tomatoes and freshly dug onions and garlic. Local markets have early crops of tomatoes, peppers and cukes. They entice me to make some of Spain’s great al fresco salads.

This one, pipirrana, in Andalusia is a favorite at tapa bars. It’s basically a chopped salad of tomatoes, green peppers, spring onions and cucumber. As a tapa it may be garnished with canned tuna, chopped serrano ham or hard-cooked egg. Without the garnishes, it makes a fresh side dish with fried fish or with foods from the grill (add pipirrana to your 4th of July menu). And, with water added, the pipirrana, accompanied by bread for sopping, makes a simple sort of gazpacho.

I’ve enjoyed the identical salad in Morocco, just across the Straits of Gibraltar from Spain, as an accompaniment to street food such as brochettes. There it is made with cilantro (coriander leaves) instead of parsley and with just a hint of chile.

With the addition of shrimp, mussels, octopus or fish roe (huevas), basic pipirrana salad is transformed into salpicón de mariscos, a fresh seafood cocktail, widely served in tapa bars (that recipe is  here).

Chop all the vegetables in small dice. The salad is best made shortly before serving. Leftovers can be refrigerated.

Combine the chopped tomatoes, onions, peppers, cucumber and garlic in a bowl. Sprinkle with the salt, parsley and cumin. Drizzle with the vinegar and oil and toss the salad gently. Arrange it on a platter. Garnish the top with chunks of tuna and chopped egg, if using.