Maybe where you live the Christmas holidays are finished. But, here in Spain, they continue through January 6, the festival of Epiphany, known as Los Tres Reyes Magos—“Three Kings’ Day.” The Three Kings—not Santa Claus—deliver presents to good girls and boys.

And more holiday means more feasting, more sweets. So, in the week between Christmas and New Year, I joined my friend Antonia Tamayo to make two more kinds of roscos, typical ring cookies.

Antonia lives in the village, but frequently visits family on the farmstead in the country where she grew up. During the holiday season, she fires up the horno de leña, the old wood-burning bread oven, to make roscos de aguardiente, doughnuts flavored with anisette liqueur, enough to last the extended family through to the twelfth night of Christmas. 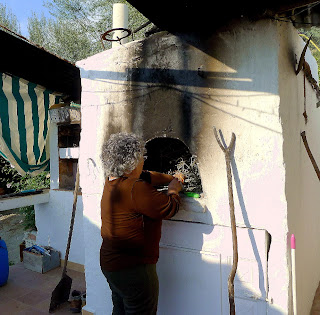 Antonia starts the fire in the outdoor oven. This time of year, she uses small olive branches as fuel. The inside of the oven is vaulted to provide good heat circulation. It is built of brick and finished with a mortar of clay and whitewash. It has a small arched door and, at the back, a small hole to provide an inlet for fresh air. 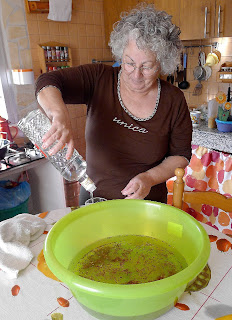 Antonia measures 4 glassfuls of aguardiente--anise liqueur. (Notice the wonderful serrated bottle.) She adds it to the big bowl which contains 8 cups of oil (she uses sunflower oil, but it can also be olive oil) that has been heated with a handful of aniseed; 3 handfuls of sugar and about a cup of ground peanuts or almonds.

Once she's got her manos en la masa--hands in the dough--Antonia needs another person to keep adding flour. Her sister-in-law, Pepi Nuñez, is the helper. The kitchen is the original of the old farmhouse, but has been remodeled. It is a freestanding building in front of a newer house that Pepi and her husband built on the farm. (The oilcloth on the table where we work is imprinted with vegetable pictures--a big disconcerting.) 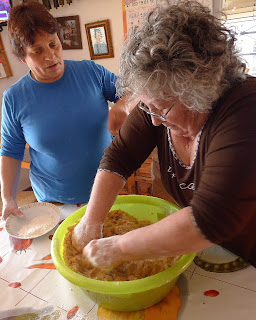 How much flour? I start out counting the scoops Pepi adds, dipping from a 25-kilo sack. But after about 15, I lose track. Antonia says the dough needs enough flour to make a stiff dough that can be rolled. But not too much, or the baked cookies will be hard and dry. 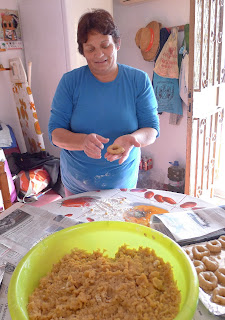 We all three lend a hand in rolling out the roscos. Not as easy as it looks, as the dough tends to crack when shaped into a ring. A small ball of dough is rolled into a rope about 1/2-inch thick and 5 1/2 inches long, then pinched together to form a ring. The roscos are placed on foil-lined oven trays. Antonia checks the oven and proclaims it ready. 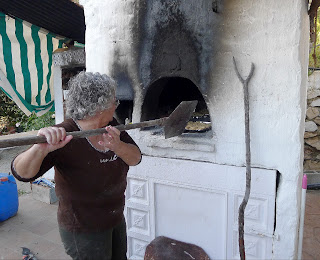 Antonia first sweeps the coals and ash to one side and uses a baker's peel to slide the trays onto the floor of the oven. 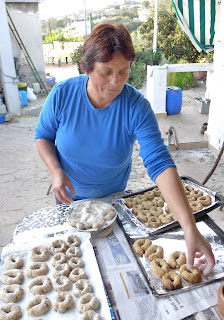 Pepi sets up a table on the patio in front of the oven. As the baked roscos come out of the oven, they are dredged while still hot in granulated sugar and placed on another tray to cool. A few of them break, so we sample them. So good! Crunchy and crumbly at the same time. The anise flavor is subtle.

Another day, another oven, more roscos. Antonia and a group of friends get together to make hundreds of the cookies to divide between them.


This oven is located right in the village. Along with a small working molino--mill to grind flour--it was built only a few years by the town hall to preserve some of the traditional folkways. While the women are kneading the dough, shaping the rings and placing them on trays, Japanese tourists come to have a look. Spanish tourists too--they want to buy a sackful of roscos. But these are not for sale. 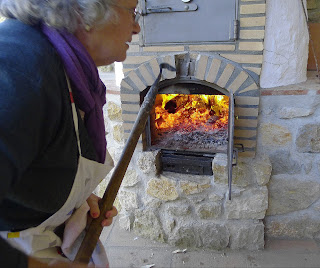 A domed oven in the traditional style, this one has a separate firebox, so it can be fueled while bread is baking. Antonia said it takes much longer to heat than the one she uses in the country. 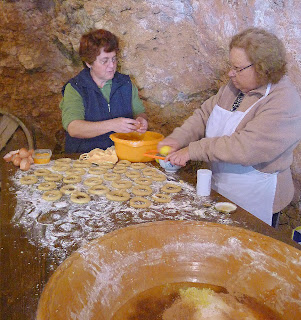 One woman separates a dozen eggs; the other grates lemon zest. They are preparing to make roscos de huevo--egg doughnuts. 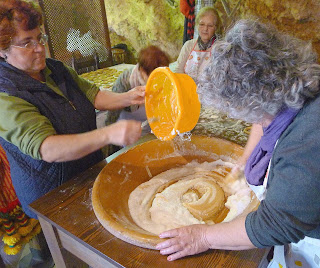 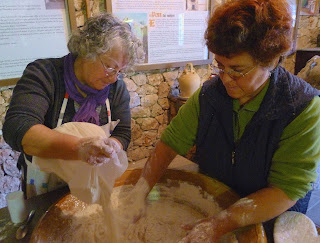 Then flour is added, about 3 kilos, and kneaded to make a smooth dough that can be rolled into ropes and shaped into rings. 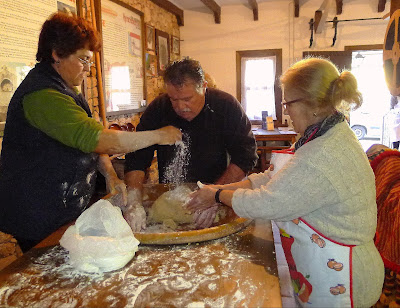 When the heavy dough gets too stiff to knead, the women call in Antonio Garcia, the manager of the municipal mill and oven. 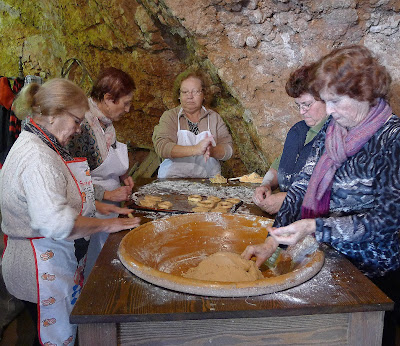 Then all hands get busy rolling the roscos and placing them on foil-lined and oiled baking sheets. They turn out three batches of about 90 roscos each to be divvied up between six of them. Some of the women remember making holiday sweets with their mothers and grandmothers. Others are new to it. They chatter about other favorite Christmas sweets, such as fried empanadillas filled with sweetened sweet potatoes. The mill and kitchen are situated in a natural grotto--thus the stone and earth wall behind the ladies. Antonia slides a tray of roscos out to move it to the other side so the cookies bake evenly. 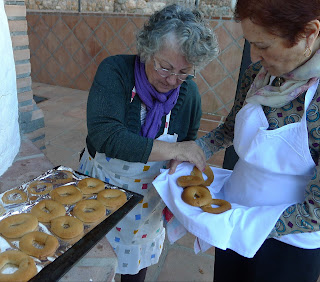 They are done when they lift easily off the tray. Some are returned to the oven to finish baking.