Mojama, sometimes called the “ham of the sea,” is an unusual product, not so widely known, although it has been produced on the Atlantic and Mediterranean coasts for millennia. The Phoenicians, who founded the city of Gadir—Cádiz—around the year 1100 BC, exploited the copper and silver mines of western Andalusia and took over trading routes from the Atlantic to the Mediterranean. Salted fish, made from abundant  tuna that migrated through the Straits of Gibraltar,  was a product that could be kept on long sea voyages and traded at far-away markets.

Mojama is made from thick slabs of tuna—bluefin, albacore, yellowfin—that are packed in sea salt for a day or two, then washed and hung to air-dry. The process, indeed, is similar to that for producing serrano and ibérico hams. The salting draws the moisture out of the flesh. As it dries, the flesh becomes firm, compacted. The flavor intensifies.

The best quality mojama is cut from the lomo, side of the tuna, closest to the center spine. It is veined with fat which keeps the flesh fairly soft and pliable.  Outside cuts taken from near the skin don’t have this streaking and become stiffer in the drying process. I have had mojama that was like cardboard or tough jerky.

The taste of mojama? Salty, like good ham, not like anchovies. It has marine overtones, a subtle iodine, but is not “fishy.” It’s a rich, umami taste. Because it’s a concentrated flavor, a little mojama goes a long way.


Good quality mojama is thinly sliced, moistened with extra virgin olive oil and served with bread. It can also be cut in dice or, if very firm, grated, and used as a flavor garnish. Unlike another dried fish, bacalao, salt cod, mojama is not soaked before using. It is never cooked.

In addition to the simple, classic presentation, I’ve discovered that mojama can be used in dishes in place of anchovies or canned tuna. Here are some suggestions. Fino Sherry or manzanilla is the best wine with mojama, in my opinion.

To make the stuffed eggs: Hard-cook eggs. Separate the yolks and mash them with a spoonful of Dijon mustard, lemon juice, chopped red pepper, chopped mojama and a little mayonnaise to make a smooth mixture. Fill the whites and top them with strips of mojama. 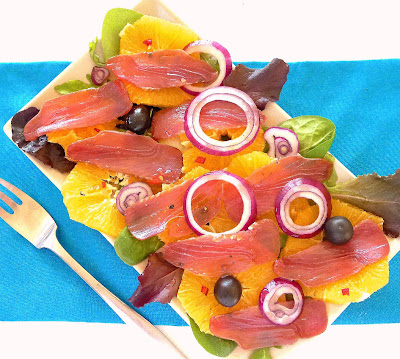 
Pasta with Mojama and Sun-Dried Tomatoes

Drain the pasta, reserving ¼ cup of the cooking liquid. Swirl the liquid into the skillet. Add the cut-up mojama and the parsley. Add the drained pasta to the skillet and toss with the oil. Season with salt and pepper. (Salt may not be needed.) Serve the pasta into heated bowls and grate a little lemon zest over each serving.