Moroccan Tagine, With a Spanish Twist

Did you see the sunset photo I posted at the end of last week’s blog? It didn’t have anything to do with cooking, but it was the view from “my kitchen in Spain,” looking south, across darkening hills, across Mediterranean waters mirroring the sun’s red glow, to the horizon, the hills of North Africa. Morocco. Another continent.

So near and yet so far. That sensation inspired me to get the Moroccan earthenware tagine off the high shelf and pull out a recipe from Paula Wolfert’s new book, THE FOOD OF MOROCCO (ECCO, 2012), for kefta tagine. Kefta are spiced meatballs cooked in the tagine with nothing more complicated than grated onion, spices and water, yet the flavors are extraordinary.

In Spanish cooking, there is nothing quite like the tagine, with its shallow base and conical lid. Tagine—the word is used for the finished dish as well as the cooking vessel—is as much of a cooking process as an object. Foods are added to the tagine without previous browning (no sofrito!). The conical top traps steam and keeps it circulating, resulting in tender food full of flavor.

I love the simplicity of layering ingredients—oil or butter in the bottom, then grated onions for flavor and substance. On top, the meatballs or, in my next experiment, chicken pieces. Spices, including saffron, water to partially cover. Covered with the lid and simmered, the food becomes ever so tender while it soaks up the spices. 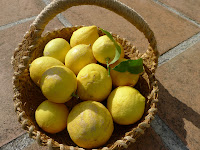 I consulted Paula’s recipe for tagine of chicken with olives and lemons—but I chose to use the method, but not follow the authentic ingredients. In southern Spain, there are many Moroccan shops where I can buy salty preserved lemons, but I prefer the tart-sweetness of fresh lemons, of which I have lots. I know—this is all wrong. But, I like it like this! The lemons cook down to marmalade consistency.

Also, I added my own Spanish cracked, brine-cured olives to give the dish a Spanish inflection.

If you don't have an authentic tagine, use an ovenproof casserole with a tight-fitting lid and cook the tagine in the oven. To pit cracked olives, squeeze them and the pits pop out. Instead of carrots, other vegetables can be cooked with the chicken—pumpkin, fennel, artichokes. Taste the sauce when you turn the chicken pieces, if it seems too tart, add a spoonful of honey. Serve the tagine with bread, rice or cous cous.


Tagine of Chicken with Fresh Lemons and Olives

Put the saffron in a heat-proof bowl and add the boiling water. Allow to infuse for 30 minutes.

Sprinkle the chicken with salt and pepper and allow to come to room temperature.

Place the oil in the bottom of a tagine. Spread the grated onion on top. Arrange the lemon slices over the onions. Place the chicken pieces in the tagine. Sprinkle with the pimentón, ginger, cumin, coriander, pepper, parsley and garlic. Tuck the carrots and onions between chicken pieces. Pour over the saffron water and remaining water.

Bring to a boil, cover the tagine and reduce heat so the liquid just simmers. Cook 30 minutes. Turn the chicken pieces, cover and cook until chicken is very tender, about 30 minutes longer. Remove lid, add the olives and cook, uncovered, 10 to 15 minutes more.

Allow to set, covered, 10 minutes. If desired, skim off excess fat from the surface. Garnish with parsley or cilantro.

Email ThisBlogThis!Share to TwitterShare to FacebookShare to Pinterest
Labels: Chicken Tagine with Fresh Lemons and Olives, Paula Wolfert, tagine, The Food of Morocco