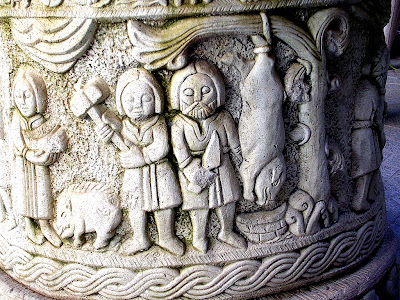 Bas-relief on a well in the courtyard of a house in a small La Mancha town, depicting the matanza, or slaughter, of a hog.


Matanza—A Hog Slaughtering
Before the sun is up the men start a big fire to heat a cauldron of water.  They are all drinking strong anise brandy, to ward off the chill and, possibly, to prepare themselves for the sacrifice. (In Spanish, the verb is sacrificar.) By the time the first rays of sun glisten on frost-covered hills, the water is boiling. A huge pig is tethered to a post. It takes six guys to heave the pig up onto a curved stone, where it hangs with legs dangling over.

Then it happens very fast. The butcher slits the pig’s throat. A bucket is ready to catch the blood spurting out. A woman plunges her arms into the bucket up to her shoulders, to stir the blood and keep it moving so it does not coagulate as it cools. Steam and mist swirl around her.

The men use the boiling water to scald the pig, then scrape the bristles. They cut off the pig’s head, then hang the carcass from a beam. Knives are sharpened on steel. They slit open the hog’s belly and the innards fall into a trough.

The women carry off the stomach and intestines to be scrubbed and soaked. They will be used as casings for sausages. The liver is cut up to be cooked for the midday meal.

The pig will be butchered the following day, when it has cooled and aired. Then the fatty belly meat is chopped and mixed with spices for chorizo sausage. The two hams are hung in preparation for salting. The prized tenderloin is cut free. The whole loin is boned and marinated in vinegar with spices to preserve it.

The men sling slabs of fat over their shoulders and carry them away to be salted down in wooden troughs. Other fat will be rendered down to white lard. Some of it goes to bakeries, which make tender-crumbed cookies with it. Some lard, flavored with red pimentón, is used to pack pieces of cooked meat in clay jars, to be kept in conserve. Once the fat solidifies, it protects the meat from the air, a sort of confit.

Once the meat is cut up, the women start the sausage making. The blood is gradually combined with a mixture of cooked rice, onions, spices and chopped pork fat. Using a big sausage funnel, they stuff the casings with the mixture. Once stuffed and tied off in links, the sausage is boiled in caldrons, then drained and hung from poles to dry for a week.

The cold, dry air of January is perfect for the traditional matanza—hog slaughtering. It used to be that every country family fattened up a pig or two for the matanza, producing fresh and cured meats to last for months. Nowadays the practice is highly regulated, requiring veterinarian inspections and authorized butchers.

Nevertheless, small communities throughout Spain keep up the tradition. Traditional sausages, such as morcilla, are produced  industrially as well. 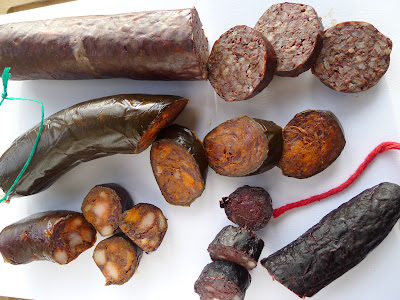 Four types of morcilla, clockwise from the top: morcilla de Burgos, with rice; morcilla from ibérico pig's blood and fat; Andalusian onion morcilla, and, on the left, smoked Asturian morcilla.


Morcilla means “blood sausage,” also known as black pudding and budin noir.  In Andalusia, it usually is a sweet-spicy (cinnamon and cloves) sausage with onion, while the famous Burgos morcilla is made with rice. Asturian morcilla, an ingredient in fabada bean dish, is smoke-dried. Most morcilla is seasoned with smoked pimentón (paprika), garlic, salt, pepper and oregano.


But, morcilla doesn't always denote a blood sausage, says Jeffrey Weiss, whose book about Spanish sausages, Charcutería: The Soul of Spain, will be published in the fall of this year by Agate Publishing.

”Morcilla is just an old word for sausage, and in the further reaches of Spain, it’s still used as such,” Jeff explains. “An example of the non-bloody variants I've come across are the Extremeñan morcilla patatera and morcilla de calabaza.

”These northern Extremeñan faves--though called ‘morcilla’--don't include blood. Instead, they are pork-fat bombs (up to 40% of the recipe by weight is pork fat) laced with a lot of cooked, starchy veggies (the patatera is all about potato, the morcilla de calabaza all about pumpkin) and spices.” A sabia, a woman experienced in sausage making, seasons the sausages.

Jeffrey and photographer, Nathan Rawlinson, are currently on location in Spain, getting a lot of first-hand experience at matanzas. The photos, above, by Nate (used with permission) were taken at a matanza in Lozar de la Vera (Extremadura, western Spain).

In Spanish cooking morcilla is usually added to cooked dishes such as potajes (see the recipe for bersa and the recipe for potaje de San Antón). It’s also delicious sliced and fried with eggs and potatoes or cooked on the grill with other meat.

(To learn about chorizo, Spain's other emblematic sausage, follow this link http://mykitcheninspain.blogspot.com.es/2012/02/intro-to-chorizo-101.html )

Use morcilla made with rice. If you are substituting another type of blood sausage, add about ¾ cup of cooked rice to the skillet with the sausage. At the tapa bar, the morcilla was served heaped on a platter placed in the center of the table accompanied by forks and chunks of bread. We all helped ourselves straight from the platter. At home I serve the morcilla atop salad greens or, as a tapa, heaped on toasts.

Heat the oil in a skillet and fry the pine nuts until golden, 45 seconds. Tip the skillet so oil flows to one side and skim out the pine nuts.

Add the morcilla and raisins and fry 3 minutes. Use a wooden spatula to break the morcilla into smaller pieces. Add the wine and simmer 5 minutes until morcilla begins to sizzle again.

Spoon the hot morcilla onto salad greens or spread on toasts. Scatter the pine nuts on top.
Posted by JANET MENDEL at 5:55 PM