WILL THE FESTIVE SEASON EVER END?

How do you say “Bah, humbug!” in Spanish? By the Twelfth Day of Christmas, I’ve had enough! Too much festive season, too much eating and drinking. I’m looking forward to getting back to hum-drum routines.

The final day of Christmas, Epiphany (January 6), in Spain is known as Los Reyes, Kings’ Day, when the three kings come from Belén (Bethlehem) bringing gifts for children and grownups too. Such excitement as they proceed through towns and villages the night before, throwing out caramelos (candy) and waving to the kids. And such ilusión, excited anticipation, as the little ones tuck into bed, visions of dolls, bicycles and computer games dancing in their heads.

This year the holiday falls on a Friday, allowing kids a whole weekend to enjoy their new toys before returning to school.

Traditional for Kings’ Day is the roscón de reyes, a cream-filled and fruit-studded ring cake. Not actually a cake, the roscón is a sweetened brioche yeast bread. I looked them over in the bakery section of El Corte Ingles department store where I was shopping yesterday, but decided against indulging. Nor did I see any good reason for yet another photo of the famous roscón—my Googled search turned up 3,990,000 entries!

Besides, I still have some holiday sweets left to enjoy on this last festive day. Among them is pan de higos, which translates as “fig bread.” It’s not really bread at all, but ground figs, spiced with anise seed and shaped into a compact loaf. The rolls are rather like fig newtons without the cookie.

I used to help a neighbor make dozens of these fig rolls. She would grind the spices in a mortar. She also added a little melted chocolate to the mixture, her secret ingredient, not found in traditional fig rolls. Now I buy the fig rolls in local shops. Sliced, they go nicely with dessert wine or, topped with serrano ham, as an aperitif.

The village where I landed back in 1966 was not undiscovered. The benign climate, brilliant light, beautiful landscape and, then, low cost of living attracted artists, writers and many retired British, who built villas in the environs. Promoting such development was an architect who built many of the first villas. His houses had some signature details--copper-clad fireplace chimneys, terra cotta floor tiles, and fig presses converted to plant stands.

Fig presses are, indeed, beautiful objects, consisting of a wooden frame threaded with a thick wooden screw, hewn from hard holm oak. The presses were used to press dried figs.

Fig trees grow everywhere, even springing up wild in rock crevices. In former times the fruit was far more important than it is today, providing a source of sweetener in place of honey or sugar. What wasn’t consumed by humans made good animal fodder.

Ripe figs, picked in late summer, are spread to dry on a ground cloth in the sun. When fully dried, they are packed into a serete, a woven straw basket, and cinched tightly closed. The baskets are placed in the press and winched down. Once pressed, the figs are impervious to insect infestation and will keep for months. 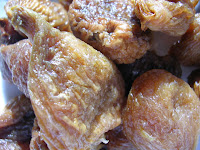 Sprinkle the figs with half of the powdered sugar. Put the figs through a food grinder (or chop them in a batches in a food processor). There should be about 6 cups of pulp. Place it in a bowl.

Put aside 16 almonds. Chop the rest and add to the figs.

Mix the remaining powdered sugar with the cinnamon, aniseed, pepper, ginger and lemon peel. Sprinkle over the fig mixture and mix it in.

Add the melted chocolate, if using, and the anisette liqueur, brandy or sweet wine. With the hands, knead the mixture to blend well.

Divide the fig mixture into four equal portions. Roll each into a log, about 6 inches long and 1 1/2 inch thick.

Spread the toasted sesame seed on a sheet of waxed paper. Roll the fig logs in the sesame, patting to flatten the logs slightly. Press 4 reserved almonds into the top of each of the fig rolls.

Let the rolls dry for 12 hours, then wrap them tightly in plastic wrap.

To serve, cut the rolls crosswise into disks and place on a candy dish.