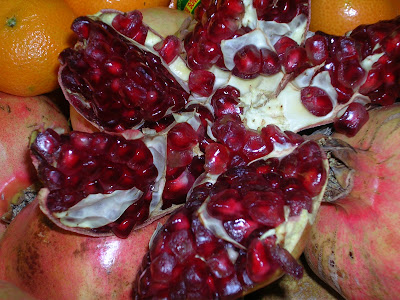 I once lived in an old house in the village with a big, overgrown garden behind it. Stone dry walls divided the sloping garden into terraces on which were planted many trees—an olive, a fig, orange and lemon, peach, pear and apricot. All these I could identify. Then there were some others, new and exotic to me.

One of these bloomed flamboyant red flowers in the spring and then in the fall  produced fruits of a deep red color, the size of big apples, tufted, with skin like burnished leather.

Cut open, the fruit revealed jewel-like red kernels. This, I learned was the pomegranate, called granada in Spanish. (While it’s not clear that the name of the Spanish city of Granada derives from the fruit, it’s true that the pomegranate is grown in that southern Spanish city.)

I treasure these jewels for their intense sweet-tangy flavor and their glowing, ruby-red color.

The “jewels”—arils—are the edible parts. The red juice is enclosed in a transparent kernel with a tiny edible pip in the center. The flavor is tart and sweet with a little tannic edge. 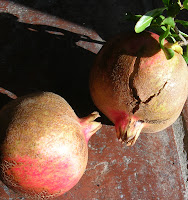 How to extract the kernels? I’ve always cut the fruit into quarters, then used a knife to pry out the seeds. But, I watched my son Ben whack a pomegranate, tufted side down, hard on the cutting board, break it open and chuck the chunks into a bowl of water. The loosened seeds sank and the connecting bits of white pith floated, easily skimmed out. By the way, the juice stains (brown, not red), so protect your clothing.

Pomegranate juice is delightful in cocktails (a recipe is here). The jewel-like seeds make a festive addition to holiday dishes. One of my favorites is sliced oranges, red onions, pomegranates and serrano ham atop escarole or mesclum, with a vinaigrette made with Sherry vinegar and a touch of honey. Sometimes I add raw fennel for extra crunch. 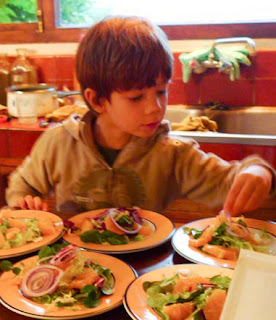 In Spanish cuisine, pomegranates are used as a cooking medium for pork (in Mallorca) and as a lively garnish for tapa salads in Andalusia and Extremadura.

Pomegranate cooked in a sauce does not keep its vibrant color. In this recipe, the kernels are sieved out of the cooked sauce and the dish garnished with reserved bright red pomegranate bits. Pomegranate molasses, a reduction of pomegranate juice, while not a Spanish ingredient, would intensify the flavors of this sauce. 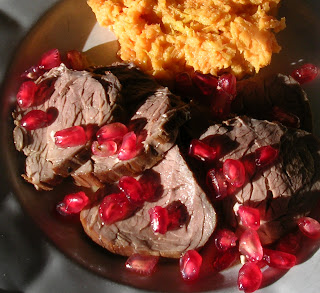 
Sprinkle the pork with salt and pepper. Remove kernels from pomegranate, discarding the skin and white pith. Reserve a handful of the seeds for garnish.

Heat oil or lard in a skillet and brown the meat with the chopped onion. Add the pomegranate seeds to the meat with the Sherry, stock and additional salt and pepper. Cover and simmer for 20 minutes, turning the pork occasionally.

Remove the meat and keep warm. Cook the sauce for 15 minutes more to reduce it. Sieve the sauce. Slice the tenderloins and serve with the sauce, garnished with reserved pomegranate seeds.