I tuned in to a new cooking show on TV and watched a three-star chef peeling potatoes. Yep, on one of the first episodes of Hacer de Comer on TVE-1, Dani García, chef of the eponymous starred restaurant in Marbella, was peeling potatoes. No tricks to it and, after the first time, he got his pinche to do the menial peeling and chopping. But, he was making a point, that you, too—me, too—can cook like a three-star chef.

While there was no trick to peeling potatoes, the chef did have some professional tips for making fries—patatas fritas. Chef García insisted that, after cutting into strips, potatoes for frying should be washed and dried. And he likes to par-boil them—exactly 2 minutes—drain, dry and freeze them before frying in olive oil.

I tried the method and I’m a convert. First, there’s the convenience of having ready-prepped potatoes in the freezer. Plus, they fry up beautifully in only 5 minutes.

Dani García’s show takes over the midday slot on channel 1 from Torres en la Cocina, with the cute Torres twins. Over on Antena 3, the granddaddy of cooking show chefs, Karlos Arguinaño, still holds forth with jokes and good cooking from his Basque kitchen. (On a recent show, he was making tuna tataki and advised home cooks to put the fresh tuna in the freezer for an hour if it’s to be served raw or rare—in order to kill any possible parasites in the fish.)


But my favorite TV cooking show is, undoubtedly, Cómetelo on Canal Sur, the Andalusian regional TV network. On the daily program, Chef Enrique Sánchez works with traditional recipes and local products, often adding simple cheffy touches—a swirl of sauce—to give professional presentation to a dish your Andalusian abuela might have made. I especially enjoy the “on location" segments with visits to where a local cheese is made, a fishing port where the day’s catch is on the recipe ingredient list, an orchard where fruit is being picked. 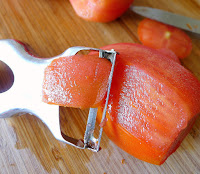 Over the years (the show has been running nine years) I’ve picked up lots of tricks from Chef Enrique. For example, how a trusty vegetable peeler works for peeling tomatoes or stringing green beans. Now I use it to strip the strings off celery stalks. And, how to cleanly remove the seeds from a green frying pepper by pushing the stem inwards till the cap pops loose, then pulling it out with all the seeds attached.

A few days ago, Chef Enrique was making stuffed eggs with pickles and salicornia. Say what?
The salicornia, also known as “sea asparagus,” “marsh samphire,” or “sea beans,” was harvested in Isla Cristina (Huelva province). It’s a salty herb that he used as a green, crunchy garnish for the eggs. Something new to look for! (His tip for perfect hard-cooked eggs: put the eggs in boiling water for exactly 12 minutes, then plunge them in ice water to stop the cooking.) The egg yolks he mixed with home-made mayonnaise.

But, this mayonnaise contained no eggs. It was made with milk! I had to try it.

How much oil you need depends on what size skillet you use to fry the potatoes. The oil needs to be only about 1-inch deep. If you’re using a medium pan, fry the potatoes in two batches. Olive oil, obviously. These are "Spanish" fries, not French fries!

Peel the potatoes and cut them in strips a little under ½ inch thick. Wash the strips and drain. Bring a pot of water to a boil. Add the cut potatoes and cook 2 minutes. Lift the potatoes out of the water with a slotted spoon and drop them into a bowl of ice water.

Heat oil in a heavy skillet to a depth of 1 inch. Remove potatoes from the freezer. Carefully add potato strips to the oil. The oil will splutter at first as the frost releases moisture. Lower heat slightly (medium-high) and fry the potatoes, turning them once or twice, until they are golden and cooked through. This takes 4-5 minutes.


Remove the fries from the oil with a slotted spoon and drain them on a rack. Sprinkle them with salt. Serve immediately. 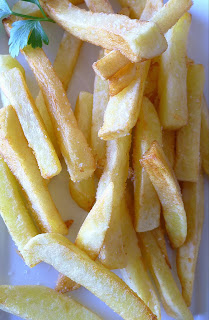 The TV chef did not add vinegar or lemon juice to his milk-mayonnaise, so I wasn’t sure if it would work or not. I made the mayo, photographed it, then returned it to the blender and beat in vinegar. No problem. The vinegar did not curdle the milk mayo.

This is quick and easy to make with an immersion blender. Use whole or 2-percent milk. Let milk come to room temperature before blending. If preferred, the mayonnaise can be made with a bland oil such as sunflower instead of olive oil.

Place milk in the container of a blender with the salt and mustard powder, if using. With motor running, add oil in a slow steady stream. Keep adding oil without moving the blender up and down until the mayonnaise begins to thicken.

Once emulsified, move the blender wand up and down to incorporate any remaining oil. Beat in the vinegar.

Use the mayonnaise immediately or refrigerate, covered, up to 5 days. It thickens somewhat when chilled. 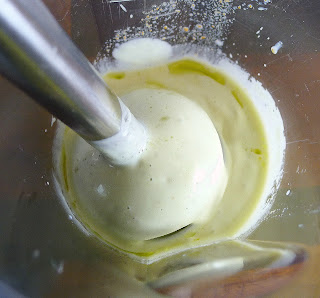